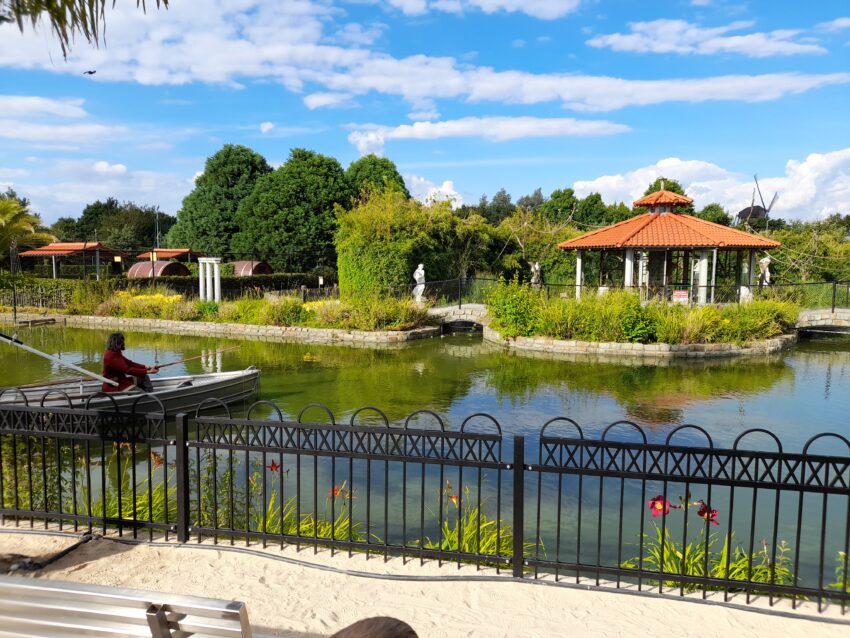 It’s not “Irland” (= Ireland), but “Irrland” (country of the crazy) that we visited… So it’s not a typo! For our summer vacation in 2022, we took a 4-day trip to Kevelaer, a famous pilgrimage place. On the fourth day, we did visited a basilica and a couple of churches, but we were really there for the amusement park with its many attractions for little kids up to 12. It was totally worth it!

Kevelaer is close to the Dutch border, and next to Germans, lots of Dutch come to venerate Virgin Mary in this beautiful city. But there are also other kinds of visitors: those with little kids, who come for fun and play. We stayed in a nice hotel, the Parkhotel, which had a pool that Lyons Cub and mommy swam in every morning before breakfast at 9 a.m. with Grandma. Afterwards, we set off for our day trip.

We arrived on Friday around noon, after having fed Aunty’s chickens, because she’s on vacay, too. We took our suitcases to the hotel first, had lunch in a restaurant in the city where we could walk to from our hotel in a few minutes, and then drove to the Irrland park (which was only 8 minutes away). Location, location! There was a huge parking lot, where ushers showed people around. The rows had Roman numbers, so you were able to find your car again. You enter the park through a Roman gate.

The Irrland park itself has three sections, North, South, and West. We had printed out an Irrland map and got a foldable one at the entrance, too.

Without it, you’d be lost in there, because there are so many attractions in the three different sections that it’s impossible to see them all in one day. It took us three days, and still we didn’t see the bamboo labyrinths, the corn you can jump into, the water park, and the train ride. We gave up trying to get to a specific target and just walked from the entrance towards anything that my son liked. There are so many shaded and roofed seating arrangements that even Oma enjoyed it, with frequent rests! And mommy enjoyed going on some very “dangerous” slides with kiddo. Alas, most attractions are for people up to 60 kg (132 lbs) only, so we couldn’t go on many things with Lyons Cub. It’s really just for kids (or very thin mamas).

In order to keep this travel report short, I will split up our adventures into the four different days we were there.

The first thing we saw when we entered from North/South entrance was a huge, blue inflatable mat. My son was almost too small to get onto it by himself. He had to try it out, of course, and run and jump with a handful of other kids. Afterwards, we went right on to an exciting climbing tower with a suspension bridge.

There were those two rope climbing towers connected with a suspension bridge that caught my son’s attention. They were located right behind the blue trampoline mattress, so they were the second attraction we passed right after entering the amusement park. The middle part was closed, so the little kids couldn’t fall off the bridge. If I didn’t weigh over 60 kg, this mommy would have climbed them, too! They even had a hammock on one side. Cool!

There are roads with traffic signs painted on the ground where you can rent a trike, wheelchair, or tractor go-kart for one Euro, which you get back when you return your vehicle and lock it up at the fence again. This part was good for learning about who has the right of way and in which direction to drive. Of course, you had to pay attention and watch out for little kids running around on the race track from time to time. My son’s legs were still too short for the red go-karts, but the blue trike worked just fine, so he ended up taking one of those.

I think my son’s all-times favorite was the haystack labyrinth. Although he once fell down one level, because there’s really nothing to grab on when you slip, he fell softly and loved to make his way through narrow tunnels up to the top. There was a domed roof over it, so it stayed dry. That was good, because it was hot but cloudy and occasionally “spitting” during the three days we were in the park. Grandma and mommy sat in the shade while Lyons Cub vanished for an extended time in the hay.

Okay, this was fun for the parents, too! It was like walking on a huge, circular waterbed. It was also a great refuge when it started to rain, because it had a glass roof. Part of this hall houses the “ocean,” and the side houses a wooden climb-on pirate ship in a huge sandbox. The parents were able to sit and relax at some benches with tables, and the kids could run, fall (softly), struggle, and play. There were some Dads who had to throw several children onto the waterbed. More and more kids searched for a Dad victim, encircled him, and had fun being tossed around. Trying to play catch was nice, too. It was almost impossible to run away. Lyons Cub made up his own rules: He said when someone falls, one cannot catch him anymore. So every time I was close to touching him, he made himself fall down on the waterbed ocean and screamed, “you can’t catch me anymore!” So tricky.

There were lots of climbing constructions. Lyons Cub likes rope climbing towers, and right next to the goat feeding meadow (which is fenced in), there was this high rope tower. He can climb all the way up to the top now without fear! By the way, if you’re looking for the restrooms, they are right opposite this climbing tower and the goat feeding place, too.

There was a petting zoo right opposite the restroom area, where everyone has to pass by at some point. We went into the enclosure to pet the goats and their many kids; there also was a feeding station, where you could buy a handful of pellet food from vending machines for 50 Cents. Lyons Cub has often fed goats before, for example at Reuschenberg Animal Park, so he was not afraid. After feeding them, he knelt down behind them, and when I asked what he was doing, he said he was waiting to see how the poop comes out 😉 Below, you can see him squatting on the meadow, admiring goat poop 😉 Besides, those pretty, red-roofed tiny houses are the goats’ quiet place, where visitors aren’t allowed to disturb them.

My son is a fan of swings; he loved his door frame jumper as a baby and his wooden horse swing as a young toddler. These swings at Irrland amusement park were especially cool; on either side, you could climb up rows of truck tires, then jump onto your swing and take off from side to side like a pendulum. The higher you climbed, the farther you swung. Admittedly, Lyons Cub didn’t get all to the top row, but for a little dude, he got quite a lot out of it. Looked like fun!

There were lots of standard swings, as well as balance swings that looked like a canoe, where you had to step forward and backward to get into motion. There was also a swing made of a thick cable where a whole family could sit down to swing, or separate people walk across in single file. It was fun even for the adults!

Argh, I’m getting sea-sick from watching it, but Lyons Cub climbed into that yellow hamster wheel and started crawling in it until it turned (not very fast, luckily). Haha, suit yourself…. I’m preferring the slides. My son really wants a hamster. He’s getting the feel for it already.

There were LOTS of planes at Irrland; there was even a whole airport! Here, Lyons Cub is sliding down a red plane, the Antonov An.2T c/n 1G147-23, registration SP-FMP preserved at the theme park. It wasn’t his favorite plane, though; that was a big blue-and-yellow plane, which had a disco with lights inside.

With some nice company, a lady and a little girl, Lyons Cub jumped on what looked like blue mountains. They were hard plastic and functioned like trampolines, just stronger; when a heavier person jumped and a light person sat down, the latter flew quite high with his bottom.

When we sat down under a little red roof to have our snack brought with us from the hotel (apples and bread rolls), we quickly got company: Some pretty, big, and colorful roosters joined us with their entourage and were happy about a few bread crumbs.

The guinea pigs had babies when we were there! They were so cute and reminded us of our two piggie boys, Spike and Angel, whom we had in Clarksville, TN. There were so many, about 20 or 30? The kids could watch them eat, sleep, or cuddle.

That wasn’t bad for our first day at Irrland amusement park, right? We went back to our hotel for dinner at about 6:30 p.m. — 6:00 p.m. is their closing time at the park, and personnel on bicycles ushered us out, since we were among the last ones to leave, and they “had closed already 20 minutes ago.” So here’s a tip: Leave about half an hour before they close, because you have to make your way back to the North/South or West entrance, depending on where you came from and where your car is parked. And that way takes quite a bit of time (especially when your kids still don’t want to leave and need to try out things when FOMO (fear of missing out) sets in 😉

If you want to learn more about other attractions, check out our complete trip here: