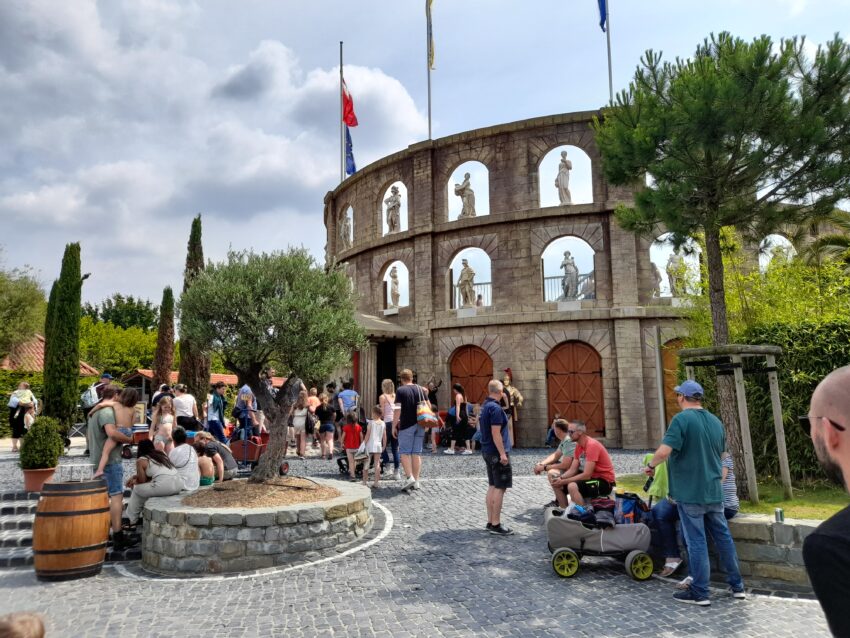 Wow, this is already our second day in the Irrland amusement park! If you missed out on what we did on our first day in the Irrland park, check it out here. Today, we’re off to see 12 new attractions. We spent a nice, quiet night in the  Parkhotel and swam in their pool in the morning. Then, we enjoyed our breakfast and drove with grandma to the big parking lot, where an usher showed us our slot. This time, we parked in a different space than yesterday, which meant that we entered through the South entrance, where the Irrland International airport is. Needless to say, Lyons Cub tried out all the planes! Many of them have slides to get down.

There was a big, blue water-filled mat and several smaller, yellow ones to jump on on the airfield.

After we had explored all the planes, we admired a huge metal air traffic control tower with different slides. Oh no, Lyons Cub wanted to go on it!! I guess mommy was more afraid than he was. OMG!!! That drop was nothing for my nerves. We slid down the highest slide on the very left of the tower. It was scaaaaaarrrrrry!!! So much adrenaline. Grandma watched it safely from the ground. We got a felt bag to sit in, I took my son on my lap, and off we went. One time was enough for Lyoness, but if it had been up to him, we would have gone down many times. But I am Gen X and don’t need that anymore, haha 😉

My son’s all-times favorite today was the firehouse slide. He climbed up inside a firehouse and slid down a very long and curvy waterslide into a small pool. It seemed to take forever, and since it’s just for kids and the parents have to wait at the pool, I got a bit worried whether he would ever arrive. Did he? Well, check it out here:

This swing here looked like a boat, and he had to pull himself on a rope. I think it got too fast for him in the end, as he wanted down quickly.

Lyons Cub loves indoor playgrounds, such as GeckoFun in the city of Burscheid and the Hoplop in Cologne. This one here was much smaller, but it was fun nonetheless. Also, we arrived there just in time since the weather started to get bad and it had begun to “spit,” so grandma and mommy were glad to sit at a table underneath a roof for a while.

We walked past a cage of blue and yellow macaws to the next sight.

6. The Man Who Climbs up a Tree to Flee from a Crocodile

Haha, this attraction we had to visit every single day, because Lyons Cub couldn’t get enough of the guy climbing up the tree to escape from the fake crocodile. He knew already what would happen, and yet he wanted to see it again and again. In addition, there were vending machines to buy fish food, so he got to feed the colorful, huge koi carps. Apart from the fleeing man, there was also a fisherman who always pulled up an old tire on his fishing rod! You just needed to be patient and wait long enough….

We walked past some people on floats on a lake, but since it looked like rain and was a bit cooler, we didn’t want to get wet so we passed it.

I’ve been to Rome a couple of times before (with 12th grade high school in 1992 and in 2004 with my sister), and I have to say that’s quite a good replica. The colosseum hosts a light and water show, so when you go inside, be prepared to get wet as you run through sprinklers that rain down on you from the ceiling as you dance to the disco sounds and laser lights. Some dangerous-looking, plastic animals of prey are inside, too. In order to get to the colosseum, you had to walk through a tunnel to the other side of the park. The tunnel had a narrow canal on one side where the kids could wade through the water while the adults stayed on the path.

Of course we visited the train; after all, this mommy works for a training academy for track construction workers and has visited a track construction trade fair, the iaf in Munster. It was a bit disappointing that this train didn’t ride, because my son had wanted to ride through the park. Oh well, we were off to the next attraction right afterwards! Right behind it on a roof was a helicopter with a huge slide down, so we climbed on it and off we went… Not as tall as the control tower slide at the airport, but not bad, either!!

Oh what fun!!! There was a big heap of sand with lots of children on it, and they assembled pipes to make water flow in different directions. There was a plastic eagle on a high pole spitting water down on the sand, too. Lyons Cub enjoyed playing with those pipes, so grandma and Lyoness parked on a shady bench for about an hour to watch him. Some kids raced down the hill, and my son rolled down, too. There was no limit to the imagination of the kids.

There was a huge area fenced in where you could observe kangaroos:

There was a special, gated island of monkeys: One could observe lemurs in their cool terrain (alas, they were all huddled up in one space, so we couldn’t observe them swinging from their ropes. Lyons Cub climbed on the stone lion at the entrance to lemur island:

Last on the program were some animals. At first, Lyons Cub climbed up a little ladder and got to see the “biggest donkey of Europe.” It was a mirror!!!

Haha. Then, Lyons Cub visited the goats, the pigs, and the calves in their stables. The final thing we did today was to milk a fake cow. It was very educational. There was a white liquid coming out of the udder when one pulled the teats after having pressed on a button of the stool. Since we didn’t find the button for quite some time, we didn’t get any milk!! However, some of the bigger boys detected the button and were able to milk the cow (which mooed just like a real one). There were two such cows, so one could have a competition how much milk one got into the big milk cans up on a shelve. They measured whether one got anything up to 10 liters. I guess that was more fun for the bigger kids, but my son got to pet the cow 😉

If you liked our adventure, stay tuned for our third day at Irrland amusement park in Kevelaer!