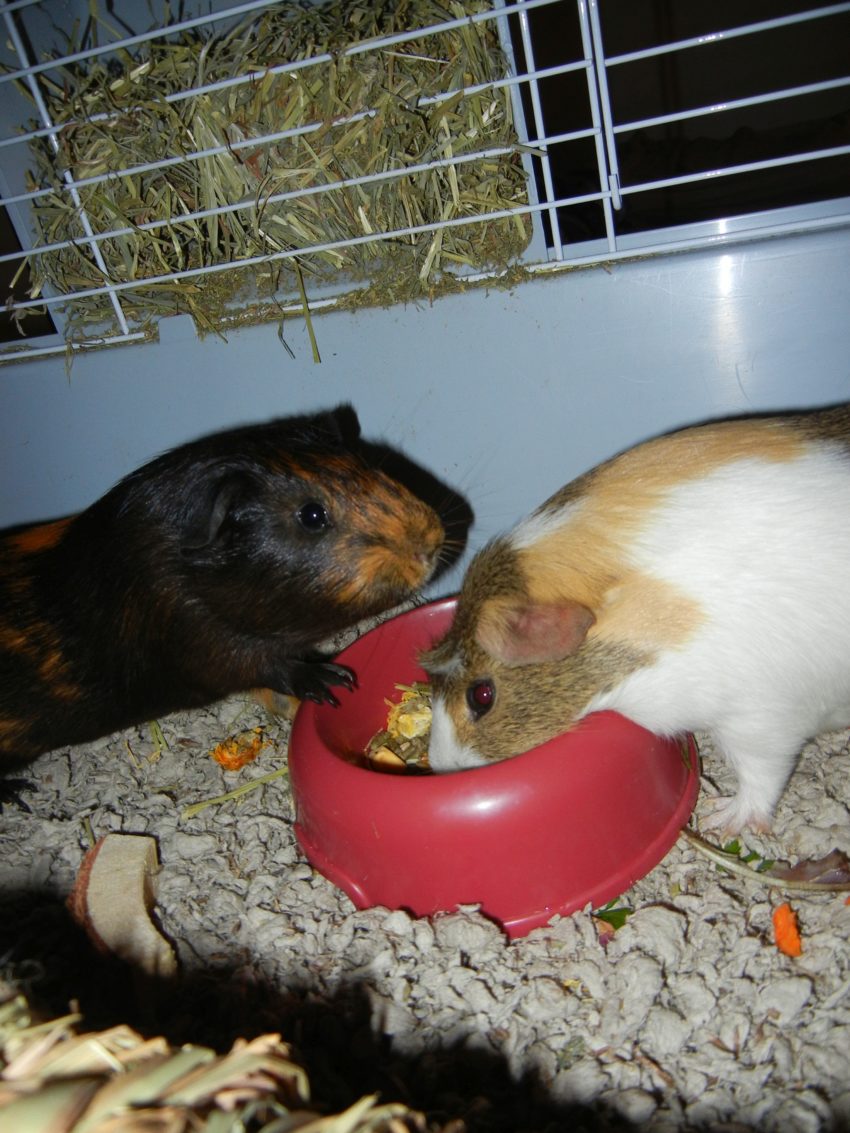 Guess what my over-50 husband wanted for his birthday in 2016? GUINEA PIGS!!! Maybe that was an unfulfilled childhood dream… whatever, I was willing to fulfill it for him. And it shouldn’t just be ANY kind of guinea pigs; I wanted to adopt them from a shelter. So I looked online, and I found a dog rescue in St. Louis, MO that had two bonded, male guinea pigs to adopt, named Spike & Angel. I fell in love with them right away and communicated with a lady who worked at the shelter. Alas, a day later, she emailed me that they had been picked up by a family, but that I should remain on stand-by, because she was going to contact me if it didn’t work out.

Well, what were the chances…. A couple of days later, I got another email saying that the family had returned Spike & Angel, because their little kids would pester them, and they didn’t like to be handled. Yay!!! My husband and I would give them a calm, nice home. We agreed on a pick-up time and place. Then, I set out to buy a big cage for them, as well as paper pellet bedding, wood for gnawing, edible hay houses, a salt stone for licking, and water and food bowls including guinea pig food. They would get fresh fruit and salad from our table, too. When I picked them up, Spike and Angel were in a cardboard box full of hay. We had a 2.5-hour car drive to take them home, and although they initially were a little spooked, they calmed down and did well on the trip.

Once home, they got to hide in their beautiful, new XXL cage. I enjoyed hearing their squealing sounds when they saw hay was coming! When my husband returned from work (he was a pianist at the university where I taught English education), he was overjoyed to find his birthday gift!

This is Angel, the calico, who was the more friendly one and would tolerate a little petting here and there:

And this is handsome Spike, who had a brown “collar” around his neck on one side.

They loved Timothy hay, carrots, corn on the cob, fresh green salad, pelleted guinea food from a pet store, and an occasional apple (we were told not to feed too many fruits due to weight gain). Sometimes, we gave them yogurt drops from PETCO as treats. This is what guinea pigs eat. They also liked a handful of mowed grass. I cleaned their cage weekly, with the daily spot cleaning in their special “corner” (which was inside their plastic house, hidden from view). It was a bit tricky to clean one side of the cage while they were on the other side (they were hiding in their house during cleaning, so I just moved it from one side to the other). They loved a clean cage and their bedding! They squeaked when I refilled it and played and rolled in it.

They destroyed their edible tunnels pretty fast, so I had to buy new ones several times. But it was too cute to see them peaking out of their tunnel! After a few days, the tunnel would have many side windows to look out 😉 I felt a bit worried for them when Frankie, our kitty, used to sit on top of their cage, reaching inside with his paw (he was our rescue and declawed, so he couldn’t hurt them), but they were not afraid of him at all and tolerated him, sometimes teasing him with their noses at the cages’ bars when he poked at them softly from outside. He became a fixture on their roof.

Alas, the year after we got Spike & Angel, my husband passed away, and I was left alone to care for two dogs (Honey and Sally), a cat, about a dozen crested geckos, one gargoyle gecko, a bearded dragon, a big fish tank, several betta tanks, and two guinea pigs! I managed, although I was pregnant and had to move from Illinois to Tennessee for a new job (they all moved with me). In Clarksville, TN they enjoyed life with my little family after my son had been born. It was a difficult birth; he was a preemie with IUGR and required feeding every 3 hours, including at night, for his first whole year of life.

I found out I had Lyme disease (it manifested itself in eye problems, rashes, and arthritis; not sure whether it was also the cause of my son being too small for his gestational age). Since it wasn’t detected by any American doctor I went to, who diagnosed me with urticaria and dermatitis (although I had had a tick bite with the tell-tale red circle behind my knee), it went untreated and I only found out about it after having done a blood test on one of our summer trips to Germany. It went away four years later, but my asthma had gotten way worse, I had to use an albuterol inhaler, and one thing that happened was I got terribly allergic to the guinea pigs and especially their bedding and the Timothy hay. It was a year before corona and I already wore face masks when I went down into the basement to feed them and clean their cage. My son’s nanny helped as much as she could, but she was hired to take care of my baby, not my menagerie, so I finally was ready to adopt them out again, after having given them a good life for three years. Nanny Nancy created the following ad for me:

Nobody applied to the ad, but my doggy walker, Kim, found a piggie rescue that was happy to help out. I hope our two older boys got to be in a nice family to live out the rest of their lives with good food and maybe lots of space in the backyard to run around. This is what I had always envisaged for them.