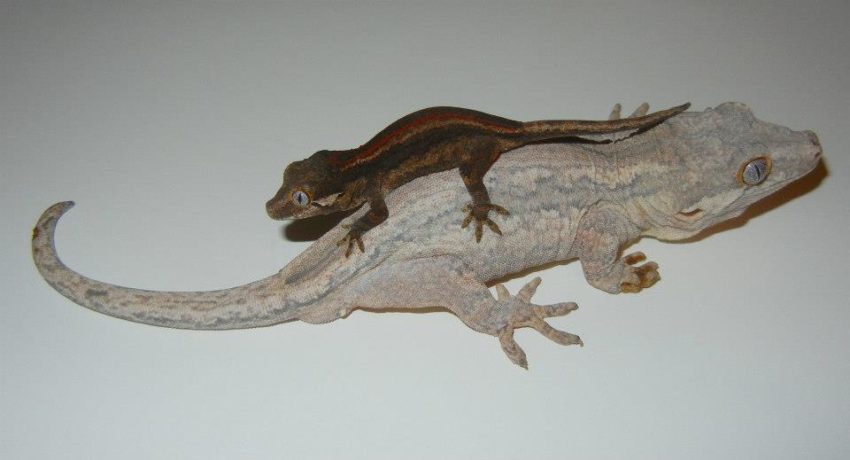 Do you like creepy crawlies, especially when they are a little ghoulish and not just cute? Then, these little horned geckos might be the ideal pet for you. Like crested geckos, gargoyle geckos stem from the island of New Caledonia and are also called, “New Caledonian bumpy geckos,” since they have two bumps or horns on their head, like little monsters, those stone gargoyles you can see on ancient cathedrals. As with crested geckos, people are thinking about declaring them an endangered species, which would restrict their exportation to other countries for the pet trade. They were first found in the year of 1869. Are you considering them as an entry-level pet? This might be a good choice, because they are relatively easy to tame and low maintenance. (Disclaimer: none of the gargoyle geckos displayed here were bred by me (LZRDGRL); I only bred leopard geckos and sold those at national shows in the U.S. The “gargies” below I acquired from different breeders, mostly between 2012-2015.)

Like crested geckos, gargoyles have a thin, prehensile tail, with which they can hang from branches. If they throw off their tails, those will grow back, which takes a few months. In the beginning, the regrowing tails are black. This is one difference to crested geckos that never regrow their tails. But don’t worry if your gargoyle gecko loses its tail; it doesn’t lose its value. In the wild, most geckos will lose their tails during flight or mating. It’s totally normal. In captivity, it happens mostly when geckos share a cage; I never had a gargoyle gecko, which I always kept separately, lose its tail. When gargoyles hatch, they are tiny (one inch long from snout to vent, not counting the tail; weighing 3 grams), and they can reach an average length as an adult of 8 to 9 inches and 60-70 grams in weight. This makes them a small to medium-sized gecko.

Gargoyle geckos come in many base colors, such as white, light yellow, bright red, orange, brown, and gray. They can have varying patterns, such as blotched, spotted, striped, super striped, patternless, or reticulated. Here is a great morphology to give you an idea of what’s out there. Their behavior is not quite as nice as that of crested geckos; they are a little more bitey and scared. Females tend to eat the tails of the males when breeding. However, they don’t jump as much as crested geckos and mostly just sit there; it’s easy to hand-tame them. Males have to be housed alone or with a harem of about three females. If you take pictures of adult versus baby gargoyle geckos, like the one below, be careful that the baby doesn’t get eaten! (By the way, don’t worry, the adult gargoyle below does NOT have stuck shed on its toes and is losing them, but it had just walked through its food dish and had dried crested gecko diet (CGD) on its foot, which was washed off later). Look at the size difference:

Gargoyles are nocturnal and arboreal, meaning they are active at night and like to climb up branches and hide in foliage. It’s important to provide them with high cages and plenty of plants (can be plastic). They need bigger cages; an adult should be housed in a high 20 gallon tank. The females, like in crested geckos, lay two eggs per clutch, but their incubation time is much shorter, 60-90 days. They can lay 8 to 9 clutches per year.

Have a look at the beautiful color and pattern variants:

Aren’t they absolutely gorgeous? Haven’t they made your mouth water yet? Speaking of which, they eat the same food as crested geckos – Crested Gecko Diet (powder to be mixed with water), an occasional cricket or bug, and mashed up real fruit (such as mango). If they don’t have enough calcium in their diet, they can also get metabolic bone disease (MBD), which makes their bones and jaws soft.

There’s one big difference between leopard geckos / African fat-tailed geckos on the one hand, and crested geckos / gargoyle geckos on the other: crested geckos and gargoyle geckos need much more humidity. For leopard geckos and African fat-tailed geckos, it is sufficient to put a water dish and a cave with a moist paper towel in the cage. The sticky-feet geckos, however, have to be misted daily with water, so you have to buy a spray bottle. They also don’t drink out of a water dish, but lick the water off the branches, so you need to spray the branches, or they won’t drink. They also need more food and won’t survive very long without it. They don’t have fat tails to store anything in, like the leopard geckos (those can survive a few months without food). Gargoyles need fresh CGD every other day; babies every day. The powder-water mix gets moldy quickly, especially when it’s warm in the summer, so on the second day, when the slushy is getting bad, it needs to be replaced. They eat rotting fruit in the wild, but not totally moldy food.

Another very important difference is that sticky-feet geckos don’t tolerate higher temperatures. If it gets over 80 degrees, they will die. So you need good air-conditioning in the rooms they are in! Leopard geckos and African fat-tailed geckos can stand heat of up to 96F. This also means that sticky-feet geckos are much cheaper to maintain, because you don’t need a heat mat under the tank or a heat light over the tank. You just keep them at room temperature (70-73 degrees) and also incubate their eggs at this temperature. You save a lot of energy this way, and you also don’t have crickets hopping through your house, since crested geckos and gargoyle geckos can live exclusively of CGD, without any live bugs.

Something funny that sticky-feet geckos can do: they can “fire up” and “fire down.” When they are relaxed, they will appear whitish and pale. When they are excited, as for eating or mating, or angry, they will show their brightest colors, like yellow or red! Below is the same gecko, a red stripe, first fired up, and then fired down. They also get paler when they are ready to shed their skin, which they eat (it is very nutritious).

Do not house crested geckos and gargoyle geckos together; each species should have its own cage. You may house a few gargoyle females together in a sufficiently roomy enclosure, but keep in mind they might get territorial and bully a weaker cage mate, or bite off each other’s tails. I always kept each animal separate. Have those eyes bewitched you yet?