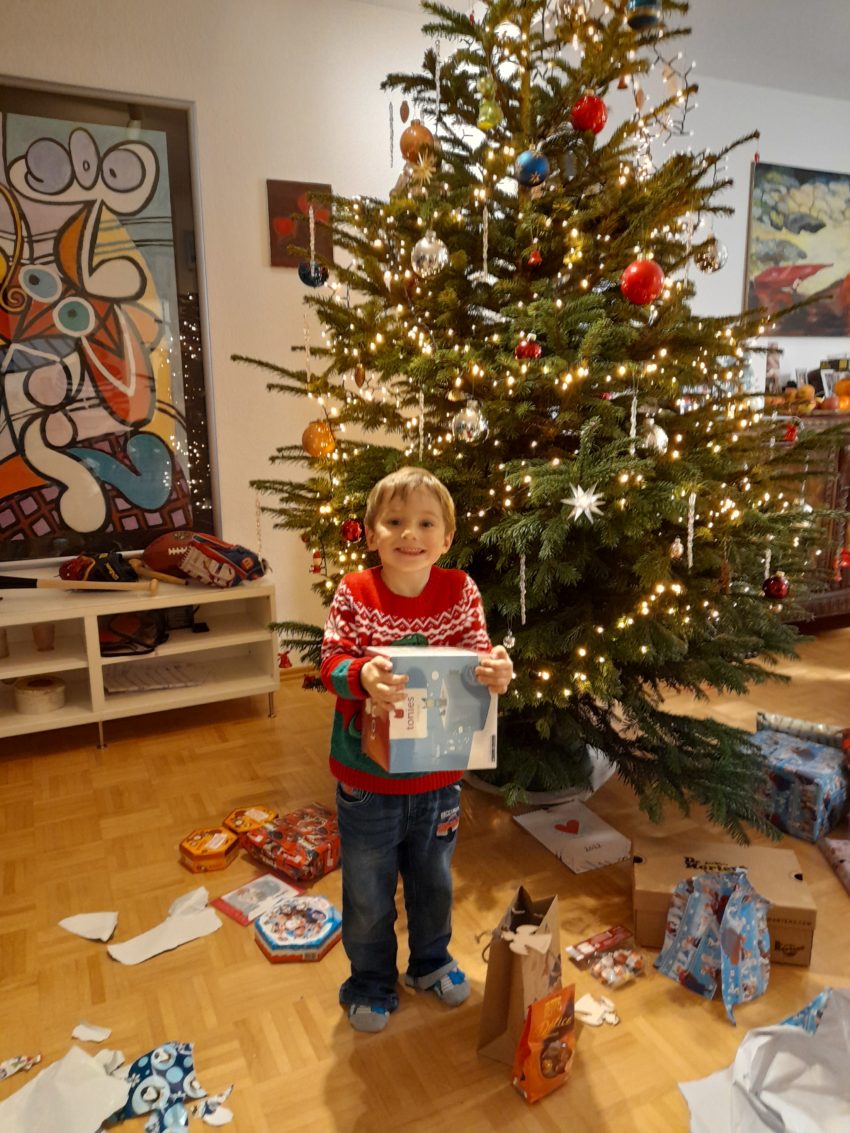 Do you have a bilingual child? Even if your child speaks only English or German, check out this awesome, relatively new toy on the market made in Germany (it exists in Germany since 2016 and in the U.K. since 2018, and came to the U.S. in 2020): The Toniebox. What a great educational device for little hands that replaces an old-fashioned record player, cassette player, or a more recent CD player, and it is SCREEN FREE and great for your child’s own imagination! In addition, it is fun to collect the hand-painted, beautiful figurines!

What is a Toniebox?

The first glimpse I got of a Toniebox was on the playground, where little Ella, my son’s American-German friend who used to live upstairs, had a purple box that astonishingly played music and fairy tales when she put little figurines on top. I thought, wow, that’s just perfect for toddlers, because I wouldn’t expect them to maneuver a CD player. When I was a little kid, my sisters and I always had to wait for daddy to put a record on the record player, which was not child-centered and always depended on the adult’s time and choice. (Also, it became scratchy after lots of playing.) When we were older, we owned cassette players (but there was always the issue with the cassette tape getting stuck and having to be put back on the spool with a pencil or your finger). Oh, good ole times 😉

For this year’s Christmas, Lyons Cub received his very own Toniebox. He already knows how to operate them, because he’s been using them often in his kindergarten and was even able to show me how to change the volume by holding the ears on the box!! Depending on the Tonie, the run time is between 16-50 minutes (designed for the attention span of little kids). Disney Tonies average 22 minutes of run time, and musical ones 40-50 minutes. The box is very well insulated and won’t break when a wild kiddo bumps and drops it.

Where to store your Toniebox and Tonies?

Before he even unpacked his Toniebox, I had installed a Tonie shelf from an Etsy artist on the wall right over his head in his bed. It’s an orange excavator (Lyons Cub loves diggers!) that carries the box itself on its bucket and the Tonies on the narrow shelves. Looks great in his room! This way, he can listen to a Tonie story if he cannot fall asleep right away (or, he can listen to mommy’s voice in case he misses me!).

So far, the shelf just hangs on four nails, but they will be replaced by screws soon. This was just a quick fix right before Christmas.

What kind of Tonies are there?

There are three different kinds of Tonies:

1. Creative Tonies (onto which you record your own content or any MP3 or MP4 audio files your kid likes). These audio files are supported by Tonies.

3. Music Tonies. Some have a mix of short stories and songs (like my son’s “The Sandman” Tonie).

There are so many Tonies; it wasn’t easy to pick the right ones. First, I chose the light blue Tonie Box with the blond boy as Creative Tonie (the one I’m recording our voices on). Of course, since Lyons Cub is bilingual, he will have Tonies in both English and German. If you speak another language, the purchased Tonies won’t be in your language; however, on the Creative Tonie, you can speak in any language you like! Thus, if you have the time and are willing to record books, conversations, and messages from relatives yourself, buying a Tonie Box for your child as a present might be worthwhile, too!

These are the four German Tonies my son got for Christmas this year:

The first story we recorded ourselves was the book Hurricane by John Rocco, my son’s current favorite. It took us 7:47 minutes to speak it on our Creative Tonie, and we still have 1 hour and 22 minutes left to record ourselves reading other books. I was starting the sentences, and my son was finishing them. He can already say difficult things like, “the ocean water evaporates” or “it spirals upwards” (in the beginning, when he was really little, he used to speak only the last word of a sentence that he knew by heart, but nowadays, he can say half or whole sentences of rather difficult books already).

Steps to take when setting up your child’s Tonie box:

2. Follow the steps in the manual in the packaging box to connect the Toniebox to your wireless. Create your child’s account in the Toniecloud on https://my.tonies.com.

3. Put your Creative Tonie on top of the box and squeeze one of the box’s ears for ten seconds. Then, it will begin to speak an introductory message. This means it is recognized, and when it is done, it is ready to be recorded on.

4. Take the Creative Tonie off.

5. Open the Tonie app on your cell phone (for Android, it’s in the Google Play Store), log into your Toniecloud, and record your first book (or just a fun conversation with your kiddo) right into your cell phone.

6. To hear your recording on the Tonie box, your kid needs to squeeze one of the ears on the box for three seconds. Then, the new content will be ready and can be heard as soon as the Creative Tonie sits on the box.

7. If you don’t want to use the Creative Tonie immediately, just set one of the Tonies you bought onto the box. Right now, the only languages for prerecorded Tonies are German and English. Other languages don’t exist yet for Tonieboxes (except for the blank Creative Tonies you record your own text on), but Tonies distinguish between American and British English, and every Tonie is compatible with any Toniebox, no matter where you bought it. Whenever your child puts a new Tonie on, he/she needs to squeeze an ear for 3 seconds. Then, the story will start.

8. Take the Tonie off the box when you want to stop or hear a different story. Every time your child wants to hear new content, he/she needs to press the ears of the Tonie box for three seconds (otherwise, old content is being played).

And if your child wants to fast forward or backward to a specific track on a Tonie figurine, he/she just needs to whack any side of the box to change the order of the tracks. For example, Lyons Cub loves the first story on “The Sandman” figurine. It deals with a little mole that smells earthworms and falls into a basement with a bucket full of earthworms, which a little boy had collected to go fishing. The mole eats them all but is caught by a mouse living in the basement. Then, the little boy comes downstairs and sees his bucket knocked over and his worms gone and starts to cry. The mole feels guilty and, with the help of the mouse, gets out of the basement and brings back even fatter earthworms to fill the bucket with. The boy and girl are surprised and don’t trust their eyes, but they end up going fishing and catching a big fish. My son wants to hear this story over and over again, so he whacks any side of his blue Toniebox to get back to this track.

Here’s a close-up of my kid’s first Tonies:

A nice extra feature is that you can enable your kid’s account for other people in your household; thus, grandma can record a story or greeting/message on her cell phone, and your child can hear it at home on his/her Creative Tonie! There is even a grandma Tonie figurine 😉

In addition, in your Toniecloud, there are offers to download either free or very cheap contents onto your Creative Tonie. As you can see in the picture below in the right hand corner, there’s the special gift of “The Wheels on the Bus” and “Pinocchio” one can put on the Creative Tonie without a figurine. (I’m not doing that, though, because I want to use the limited time available for personal messages and reading my son’s favorite books with him for which there don’t exist any Tonie figurines.)

The app is for voice recording, so you can speak stories and messages onto your child’s Creative Tonie even if you’re not anywhere near the Toniebox or Creative Tonie (might be great for military parents or other moms and dads who have to travel often for work, or for grandparents who live further away).

The website, https://my.tonies.com/, is more interactive and allows you to rename titles and delete content from your child’s Creative Tonie.

This is what the screen on my laptop looks like when I open my son’s Tonie account in the Toniecloud, with our one recorded book, Hurricane by John Rocco (7:47 min.):

And this is what Lyons Cub’s Tonie shelf looks like with its first inhabitants (we were listening to Masha at the moment; that’s why her figurine is activated, as you can see from the blue light under her):

You can see that the excavator still has so much space on it!!! Thus, for his birthday in January, Lyons Cub will get these German Tonies (he picked some of those himself):

What if your child loses a Tonie figurine?

If the figurine is gone but had been used and uploaded before, the content is still in your Toniecloud.

And if you need support with your Tonies, check their Tonie support website.

In addition, I have bought Lyons Cub the decorative cover called “Seven Seas of the World” (Die Sieben Weltmeere), because the box is just plain blue and he really liked some colorful pictures on it. There are differently themed deco covers available for the various colors that Tonie boxes come in (blue, gray, green, pink, purple, and red). My son doesn’t have the Tonie headphones yet (he won’t need them in our place, as he cannot disturb anyone (he could simply go into his own room)), nor did I purchase the Tonie traveling case (I might do it after the pandemic, when we’re traveling more again). For the time being, we’d just put it in a normal suitcase.

And after his birthday, it might be time for a new Tonie shelf from Etsy 😉

5 thoughts on “… Get a Toniebox and Tonies for Your Kid?”

Masha and the Bear Tonie character 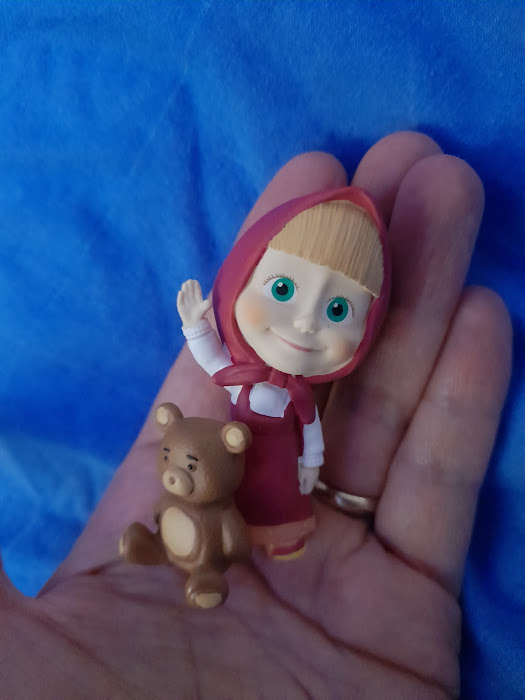