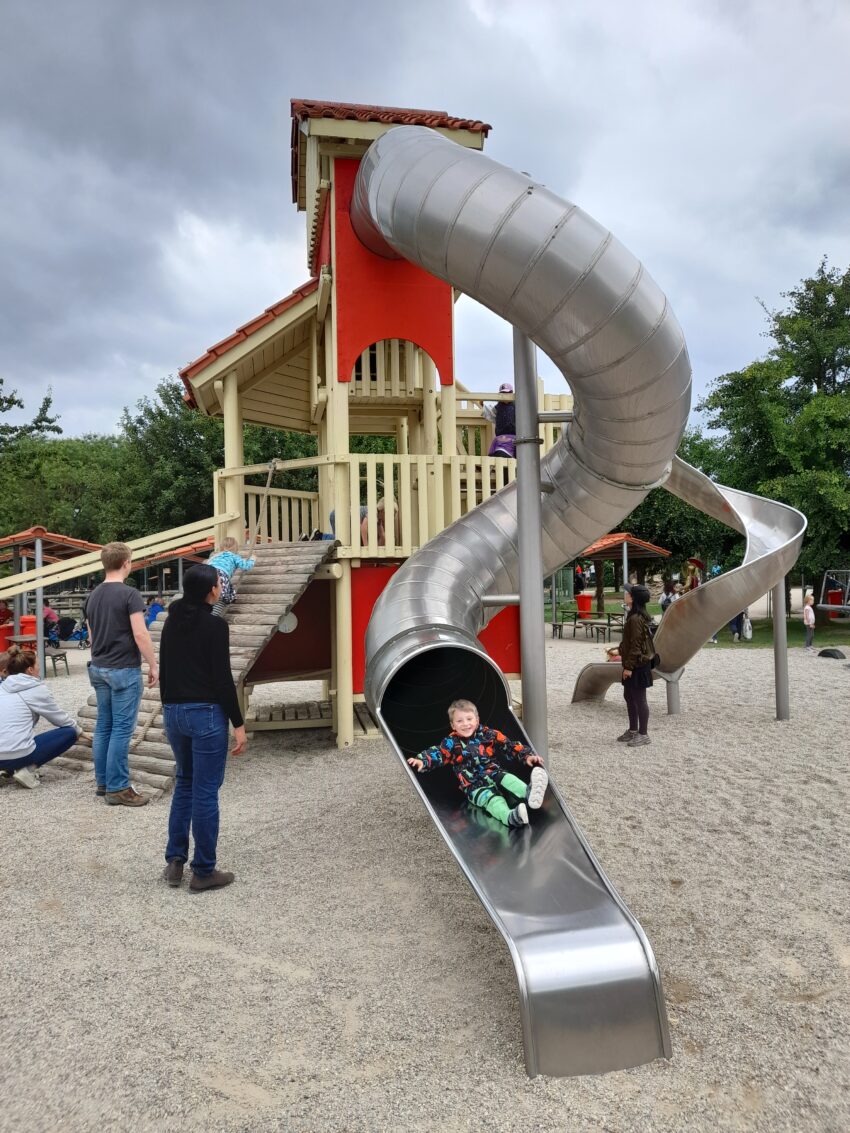 Yay, this is our third day in the Irrland theme park already! We have already climbed on haystacks, fed goats and chickens, raced on tricycles, climbed on towers, and jumped on trampolines on our first day in the park, and inspected planes, gone down giant slides, played with connecting pipes on sand hills, slid down the firehouse water slide, and danced to the disco sounds in the Colosseum on our second day. Today is our last day in the Irrland park, as tomorrow, we will visit the city of Kevelaer, a famous pilgrimage site, itself and see some churches before we drive back home again. What does this day hold in store for us?

At first, Lyons Cub climbed on a rope climbing tower, all the way to the top. On the way to bigger attractions, we tried out each and every slide, swing, and seesaw on our way, and there were many… My son liked the tire swings. Then, he went on a seesaw with two bigger boys, and that wasn’t exactly fair, because they were heavier than he, and he had to run to and fro to keep the seesaw moving, so he wouldn’t be up in the air the whole time 😉

Lyons Cub turned on that thing here until he got dizzy. Mommy almost got sick just from watching 😉

Then, Lyons Cub walked over to the race track for tricycles, go-karts, and — wheelchairs. In our times of political correctness, I found it a bit weird that the latter were there. They weren’t easy to operate; the kids had to learn how to turn with them. They also weren’t intended for disabled children. There were many of these vehicles standing parked in one row. They were so popular that my son didn’t get to ride on one yesterday, because they were all taken, so he had to ride a blue trike and was really disappointed. I personally felt a little uncomfortable with such an attraction in an amusement park. For some kids, that’s reality. If you have feelings about that attraction, you may leave them in the comment section. The park is “suitably restricted” for wheelchair users, since they can hardly be pushed on the sandy ground (we often got stuck with our stroller), and most attractions don’t work for people with limited mobility; yet, wheelchair users and blind people get free access to the park. Anyways, little kids don’t think about such existential questions yet. My son finally mastered the turning:

Afterwards, we walked toward one of the main attractions for today, a huge climbing tower with slides on a playground. It had different levels and a wooden ramp to climb up with a tow.

After this attraction, we got hungry and had picnic in one of the many roofed booths around. We bought chicken nuggets, French fries, Fanta for Lyons Cub and Coke for grandma and mommy.

3. Feeding the Goats and Donkeys, and Visiting the Stables

There were vending machines where the visitors could buy pelleted food for the goats and donkeys for a Euro. It came without a bag; the kids threw the coin in and then simply held their hand under the machine while turning the lever. Of course, lots of food got spilled, so we often picked up what was on the ground and managed to feed a couple of animals with that.

In the stables, a group of children admired the chickens with their eggs, the pigs with their piglets, the goats with their kids, as well as the cows with their calves calves.

The best attraction today — one we spent about two hours at — was the section with the huges LEGOs. Lyons Cub and Lyoness built their own little LEGO house you could walk in, complete with a table and a chair, where children could sit on. Meanwhile, grandma rested on a bench outside the fence and watched us build. One had to be careful, because left and right, LEGO houses were destroyed with a big smash and bang, so that kids could start building new ones, and there were several brick thieves trying to steal bricks off our house. But we were very watchful, haha!

5. The Pee-Pee Man in the Outhouse

The funniest attraction today was a guy in an outhouse, which had a motion detector on the door. When kids came close or waved their hands, the door opened, and the guy said not to disturb him while doing his business, and then he sprayed water at the kids! (However, it came out of his mouth, not from further down…) How well thought-out that was, because this sight was right opposite the public restrooms!

This concludes our visit to the Irrland amusement park. If you’re interested to see the city of Kevelaer, stay tuned for our final adventure tomorrow…