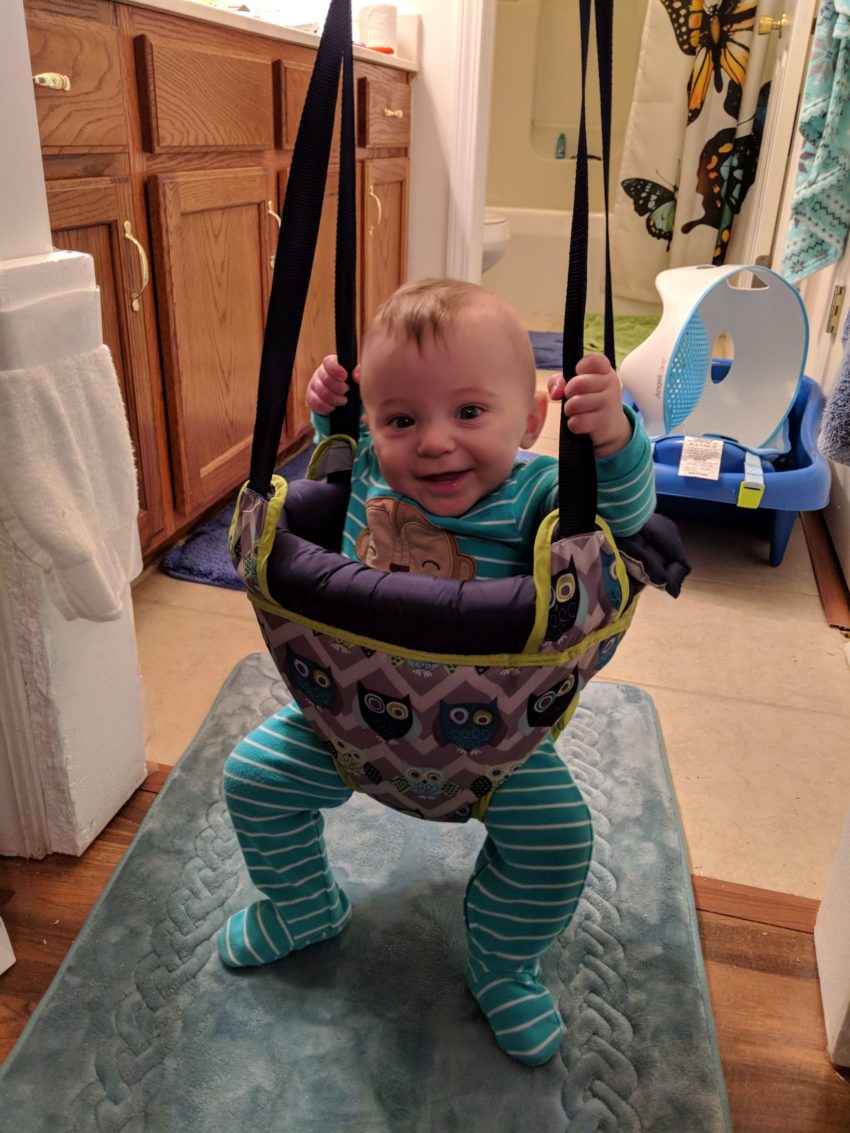 Lyons Cub was born weighing 3 lbs. When he came home from the NICU after three weeks at 4.2 lbs, he had a big head and small extremities, because the nutrients from my failing placenta had gone to his head, not his arms and legs. Therefore, I was looking for activities and toys to strengthen his leg muscles, what we also worked on with his Early Intervention team. The problem was, his legs were too short for most activities, since he couldn’t reach the floor. One of his earliest activities was the Evenflo Exersaucer Door Jumper. It was easy to mount to the door frame and never fell off, even when he got older and wilder. (I have a WILD child!!!)

One can hang it really low, so even the shortest legs can touch the ground; plus, I put a soft bathroom mat underneath. By the way, you can hang some toys from it, to keep baby’s hands occupied while the legs were working. We used an orange rattle. You can also turn the seat around; sometimes, we had the owl motive on the front, and sometimes the black inside. That’s great for when baby spills something. Yes, he was drinking his bottle in there and working to lose the calories right away! 😉 I also taped styrofoam boards and towels to the door frame, because as Lyons Cub got older, he jumped so enthusiastically that he banged his head on the door frame. So definitely think about that issue! When Lyons Cub was still really young, around four months, he did not quite know how to jump in the jumper yet, he just kind of turned around and was generally happy to be moving on his own. Here is a video of an earlier stage, where Lyons Cub didn’t have much practice yet:

After a few weeks, he got quite good at it; he turned, circled, twisted, used it as a swing, and had lots of fun. Beyond six months of age, he had mastered the skill of jumping alone. In the beginning, he was so small that I had to roll up some towels to put in the seat with him, so he would fit better. As he grew, he filled out the seat more and more. I had a tiny baby, so he was never too big and didn’t fall forward or out of his seat.

I attribute it to our door frame jumper that Lyons Cub acquired more autonomy and joy in his movements. He gained enough leg strength to crawl at 10 months and walk at 14 months – a couple of months later than most babies, but he was a preemie and had IUGR, so every milestone he reached was a huge gain for him. When he was a year old, the door frame jumper had become too small and uninteresting, and I hung a wooden horse swing in its place. And when he got too wild on this one indoors, I hung it from our deck in the back yard, and it provided another year of joy in the fresh air. Thus, if you have a little baby that enjoys or needs movement and leg exercises, this door frame jumper might be a good idea.