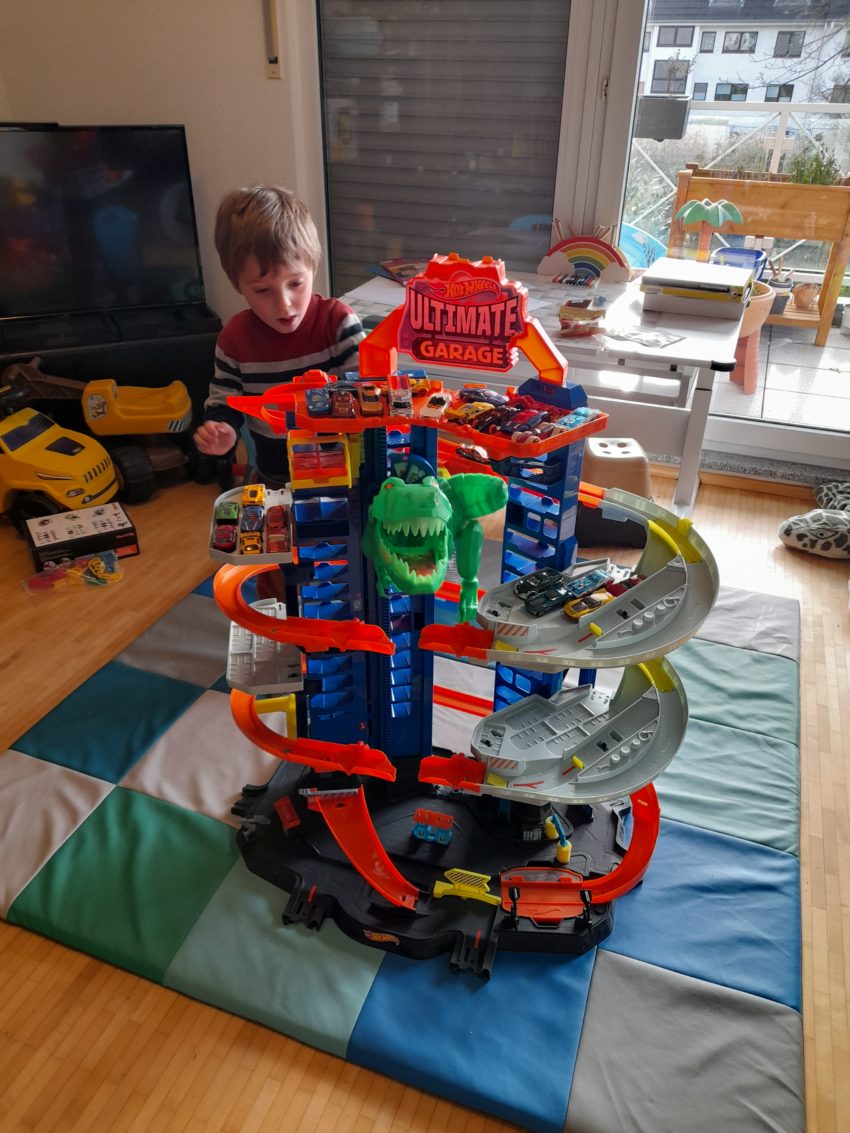 Today is Lyons Cub’s 4th birthday!!! He had been watching YouTube videos of kids playing with the Hot Wheels City for a while, and his biggest wish was to have some components to build this city by himself, eventually. For weeks, a huge, mysterious cardboard box had been standing in mommy’s bedroom. It contained the Robo T-Rex Ultimate Garage! He had no clue what was in there, of course, and he had slept in mommy’s bed several nights (whenever he had nightmares about “the girl with the big ears,” his newest thing).

This morning, he stormed into my bedroom at 7 a.m. (on a Sunday!!), screaming: “I have lots of energy! I’m four years old! It’s my birthday! Wake up, mommy!!!” So we dressed quickly, singing “Happy birthday to youuuuuu,” and walzed into the living-room, where during the night, his presents had been secretly arranged.

However, before he got to unpack the huge parcel, he opened smaller parts to construct his city, such as the Toxic Snake Strike, which (to his greatest joy) contains a can of yellow slime (my son loves slime):

He could barely concentrate on the snake, because he had eyed the life-sized, mysterious parcel, so he walked over to unpack the Ultimate Parking Garage. It took both of us to free it from its huge cardboard box. After half an hour, mommy had figured out how to set it up. The instructions were written and drawn very clearly, but you have to turn the set-up from the front to the back several times to attach the race tracks and support rails, which made it a bit difficult for this spatially challenged mommy 😉 It worked perfectly right from the beginning! The T-Rex never got stuck.

The garage is as high as my son, lol. Lyons Cub cranked the yellow lever, and the yellow box containing two Hot Wheels cars went up to the top of the parking garage together with the green Robo T-Rex. After having arrived at the top, the cars are released and race downwards, while the T-Rex also rushes down and opens his gaping mouth wide to swallow the cars. Sometimes, the T-Rex eats a car, sometimes, one falls off the track, but oftentimes, my son “won” and his car made it safely down. By the way, on the ground level, there’s also a tiny car wash with yellow sponge brushes and a gas station, as well as a repair place with movable arms to do “maintenance” on the cars.

I had bought a package of tracks containing curves (without those, you cannot build the city), so we connected the toy he already had, the Toxic Gorilla Slam, which he had received for Christmas last month.

I had also gotten him a loop, because what is a race track without loops???

Then, he had wished for the Shark Chomp many times in the past, and since it came in a double pack together with a red dragon on eBay, he got both. The blue shark doesn’t need to be connected to the rest of the city, as it works perfectly by itself: With its mouth, it can eat (scoop up) cars and poop them out of its back. The red dragon with the yellow wings shoots out cars with high speed. It is best connected to a long, orange track that goes straight on. Our cars don’t do so well in the curves at high speed; they often fly out of the bend and end up somewhere in the room. But Lyons Cub has a LOT of fun with them!

We further connected two ramps for jumping, as well as a track-builder gravity speed box, which contains a launch gate for four tracks. It comes in a bucket, and you take off the yellow plastic lid to fixate it on a high chair or table. Then, you connect tracks (we just used one track, so we would have a longer path, but you can use all four) that lead downward and go over the blue bottom part of the bucket, where you mount three gates with swinging doors that the cars will race through. The higher you fixate the yellow lid, the faster and longer the cars will go. Half of our living-room is occupied by Hot Wheels City now, erm… we still have a little room for Daddy’s grand piano and our dinner table. Here, you can see Lyons Cub’s whole set-up:

I have to admit, this mommy loves to play with Hot Wheels City just as much as Lyons Cub!!! (Well, maybe except for the part of cleaning yellow slime out of his clothes, from the parquet floor, and out of the tracks… 😉 ) But I do have to say, this slime is very thick and gooey and easy to pick up. So far, it has left no residue after cleaning.