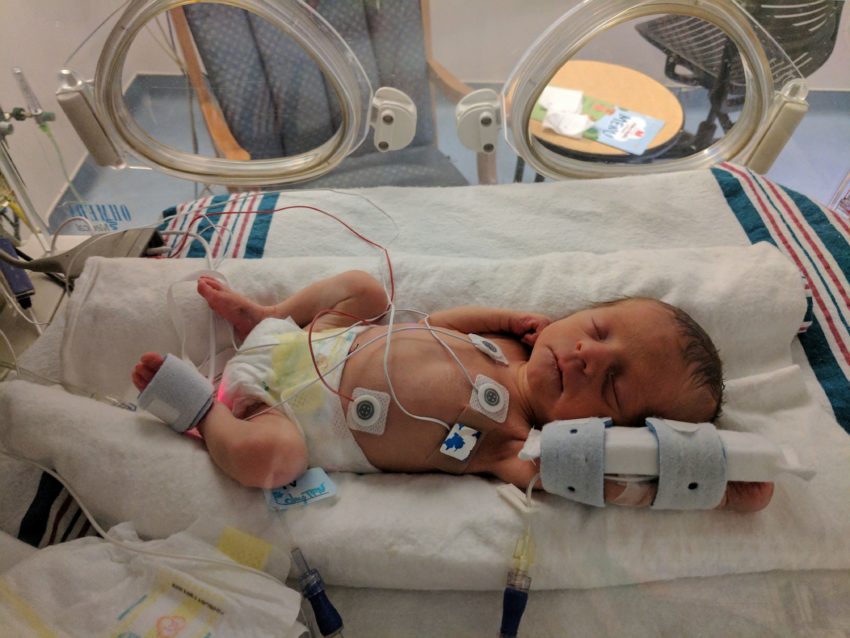 It was 11 p.m. on January 29th. I was 34+5 weeks pregnant. I had come home from teaching night class from 4-7:30 p.m., had made dinner, jumped into the bathtub, and was drying myself off when I noticed I lost my water. At first, I wasn’t sure if it was from the bath, but it was so much that this was impossible. What’s more, there was blood in it, which could be sign of placental abruption. I called my nurse, and she said to go to the hospital immediately. So I put two large bath towels into my pants and drove myself to Tennova in Clarksville, TN where I had an appointment for a planned C-section for February 28th (although according to the due date calendar, my son was supposed to make his appearance only on March 8th). When I arrived at the reception, the receptionist was bantering with a patient, and I stood in line behind him for a while, dripping, until I said, “Hello? I am having a baby.” The lady started telling me there were forms to fill out and blah blah blah, until I interrupted high-strung, “right now!”, which prompted her to usher me into a room where I was immediately put on a stretcher, with sensors attached to my belly, and when the cardiotocograph indicated by its zig-zag lines that I had contractions, the nurse asked in disbelief: “Did you not feel anything?” But I have a very high pain tolerance and just thought the heavy feeling that I had been having down there for the past week was Braxton-Hicks, or practice contractions. Although I was “AMA” (advanced maternal age) or, as the British say, “geriatric mom” (which counts from age 35 on!), I had not had a high-risk pregnancy. I was supervised due to having done IVF, but my last ultrasound at 27+2 weeks still showed that the fetus was on par developmentally. The doctor just said, “He’s on the smaller side, you’re lucky; it will be easier to push!” This would not have applied to me, anyway, because at my age, I had demanded a scheduled C-section to prevent adverse outcomes. At least, that’s what they do for mothers that age in my home country, Germany.

From now on, everything went quickly. I got one steroid shot to develop baby’s lungs, called my nanny who arrived at 4 a.m., the doctor came in and announced happily: “I am now going to have a shower, drink a cup of coffee, and then we’ll get baby!!!” He left me attached to the machines, worrying sick and having to be turned to my side, so baby’s heartbeat would not drop again. I got a spinal epidural. At 9 a.m., I was wheeled into the operating room, and at 9:11 a.m. on January 30th, Leander was born, weighing a whopping 3 lbs and measuring 15 and 3/4 inches. He had Apgar scores of 8/9 and 9/9. When I heard his tiny cry, I knew in my heart he would be well. The doctor was surprised and wondered why my gynecologist had not noticed that he had been so small. Baby had stopped growing at 28 weeks, apparently. I was lucky I had lost my waters, because I might have had a stillborn. Leander did not get enough nourishment inside my belly; he was born with asymmetrical IUGR. This means he had head-sparing intra-uterine growth restriction; his arms and legs were short and tiny, but his head was big. I heard this was the better version, because there is also symmetrical IUGR, where the whole baby is equally behind in growth. In Leander’s case, all the nutrients he could still get out of my failing placenta went to his head; his limbs would catch up later. I had hopes that his brain was not affected, and it wasn’t. My placenta was tiny; they showed it to me. My brave nanny Nancy took photos during my C-section.

Since my baby was under 35 weeks old (he was 34+6), he automatically qualified for the NICU, but because he was also growth restricted, they transferred him immediately by children’s ambulance to the higher-level NICU at Vanderbilt in Nashville, while I had to stay behind in Clarksville due to my C-section. Leander was covered with a net, so he could not move around during the drive. He was on oxygen and had a tube down his throat. They wheeled him into the recovery room, so I could see him one more time.

I had to say good-bye and was so scared my teeny-weeny itsy-bitsy son could die on the way. But the medical staff was very reassuring, and I could always call the NICU nurses at Vanderbilt and ask for updates during the one day I missed my baby. I heard they were able to remove the oxygen, which was good news. His lungs worked! I should have stayed at Tennova for three days to recover from my C-section, but I signed myself out the very next day, and nanny Nancy drove me to Vandy to be with my child. I remember a rocky ride over pot holes in Music City, which I will never forget… At Vandy, Leander had a special “pod” where I could sit next to him uninterruptedly. There’s my blue, padded chair and the very forceful Medela breast pump.

They already let me do kangaroo care with him, and I was worried I could break something, since he seemed so fragile, and I was scared to disconnect one of his wires. The intravenous line vanished soon, as he started taking his bottles, so he remained attached to only the monitors. Every time I burped Leander, his heart rate got over 200 and the red, beeping machine over his head went off and scared the heck out of me; I learned this was normal.

As a first-time mom, I had absolutely no clue what was happening with him or to my own body. For example, the first days, I only produced droplets of colostrum and was so proud to fill the tiny, 20 ml NICU bottles. I did not know what “letdown” was. However, with the release of oxytocin, the milk just shoots out, and I sprayed my newborn baby in the face! I morphed into a moo cow. I became an over-producer, although I had tiny breasts all my life, and later had to buy a freezer for the basement, because the freezer in the kitchen was already packed full with Medela bags of pumped breast milk. You really cry if you accidentally spill some of your “liquid gold”!

You can keep pumped milk in the fridge freezer for half a year, and in a chest freezer for a whole year. In the fridge, unfrozen milk stays fresh for about a week. The NICU stored my unused milk in their fridge, and when my son was dismissed, I got a whole basket full of frozen milk to take home. When baby had drunk from a bottle but not finished it, I was told to dump the rest and not put it in the fridge, because of germs. By the way, colostrum is dark yellow and not as white as the milk that comes in after a few days. I learned when baby is nursing, the foremilk is not as rich in fat as the hindmilk, and I was so surprised that a 2 mm layer of fat swam on top of my milk in the 50 ml bottles. That was the thick and rich hindmilk. It made it difficult to clean the greasy bottles, so one of my first useful investments was a good bottle brush. My milk was only 19 calories, I was told, so I had to fortify Leander’s bottles with 24 calories for about two weeks, and 22 calories thereafter. I did that for about five months of his life, until his pediatrician said I could stop. I used Similac Sensitive, and my son did not get very constipated from the added formula. If he had gas, I used gas drops or gripe water. We nursed a little for comfort, too, but due to the fortifying, I became an “exclusive pumper.” I invested in a pumping bra with two holes, so I could pump on both sides at the same time while correcting my students’ essays on the laptop. When I had “mommy brain,” I sometimes forgot to screw the two bottles on, and the pump made the milk run down my belly!

In hindsight, I am glad that I didn’t know while I was pregnant that my son had stopped growing and that my placenta was failing. I would just have worried sick, all the while being powerless. It happened after my last ultrasound, so nothing was detected. I always measured a little small (one professor at my university had met me a couple of days before I gave birth, and she was totally surprised and exclaimed, “But I just met her, and she didn’t look pregnant then! How could she have had a baby??”). Until the very end, I was able to hide my belly under a loose sweater. But I learned that if I had known about the diagnosis, there would have been nothing I could have done. No amount you eat or drink can put weight on your baby. Some mothers drink lots of protein, or do bedrest, but if the placenta is failing, it is out of your power. Sometimes, IUGR is due to a chromosome issue, which wasn’t the case for me. If you have been diagnosed with IUGR, know that it is not your fault, and you are not a bad mom. The NICU will make you strong. Some mothers are afraid they might not be able to bond with their child if it lies in a glass box with two round windows, through which they can touch their newborn. Of course they will bond, even if they cannot be there each and every day. I sang to my boy when I sat in front of his isolette, pumping away. And I found help from the IUGR forum on Facebook, which you could join (it is by invitation only, so you have to contact them and explain your situation to be admitted). Their logo describes our little fighters well: “Tiny but Mighty.”

P.S. If you need help from friends and relatives to accumulate baby items while your little one is in the NICU, you might want to try the Baby Registry from Amazon. I set one up for my son and received many useful items, such as clothes, bottles, crib sheets, toys, etc. It will prevent you from receiving things that you already have, or that another person wants to send you. It is especially valuable during the pandemic, because many relatives cannot visit you and baby, but they really want to contribute in some way. Also, you won’t need to go physically shopping with a fresh C-section scar, because the items are delivered directly to your door to any address you indicate. For me, it was a big help during a difficult time. (Disclosure: This is an affiliate link. This means that, at zero cost to you, I will earn an affiliate commission if you click through the link and finalize a purchase. It’s a win-win, because this way, you can help a little half-orphaned boy a bit, too.) 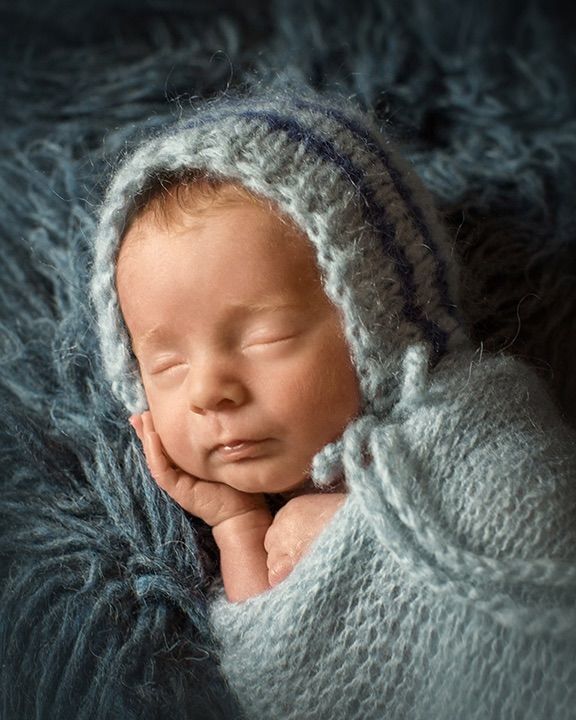 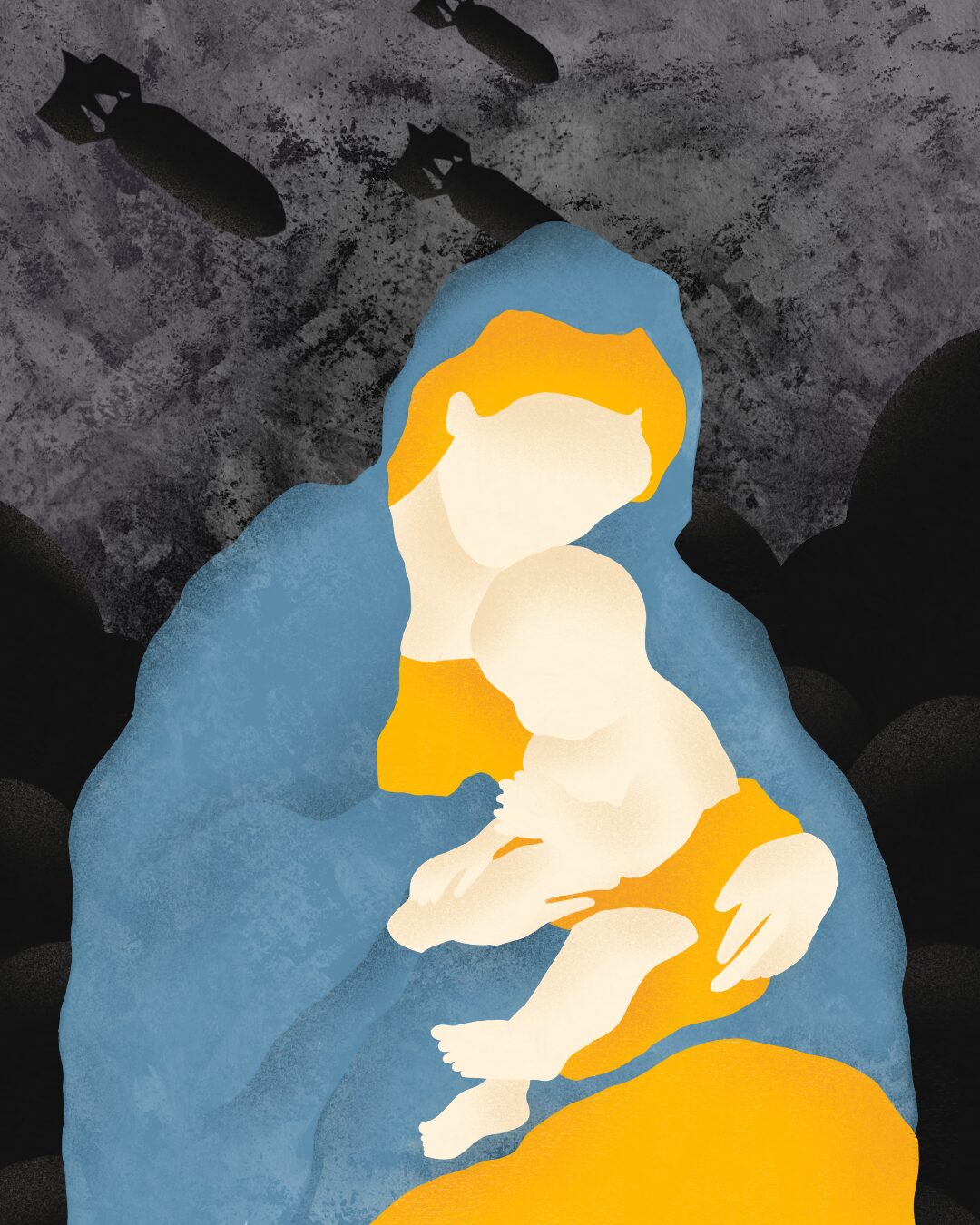