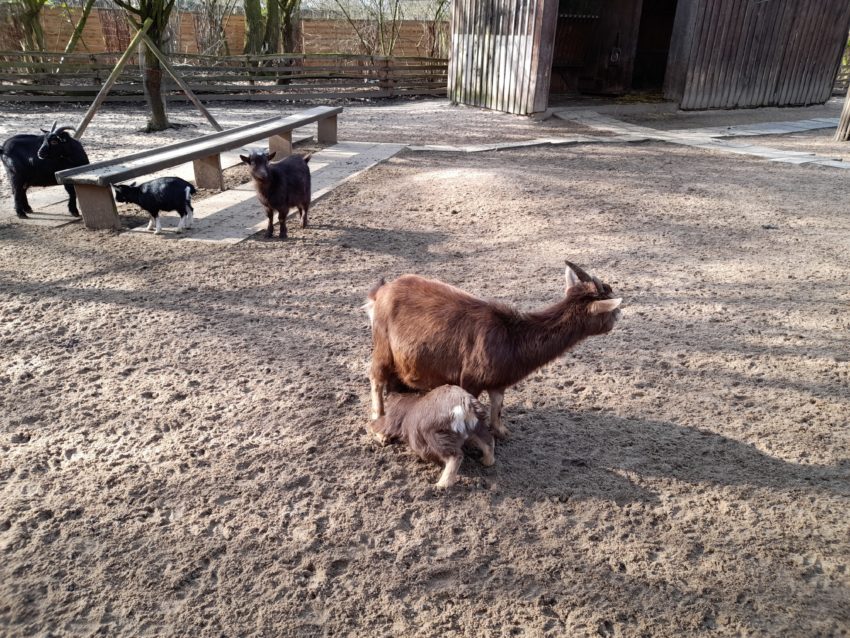 Today, Germany is awaiting a major storm, so the government of our state, North Rhine-Westphalia, has ordered all schools closed tomorrow. Since Lyons Cub won’t go to kindergarten, we’ll play inside. Luckily, we used the nice weather last weekend to go to the Wildpark again to visit the goats, sheep, alpacas, and porcupines, etc. – it was totally worthwhile, because the goats had kids! It must be the season right now… Thus, my son got to see for the first time in his life how baby goats are sucking from their mamas.

By the way, did you know that goats have horizontal, slit-shaped pupils??? You can see it very well in the video below.

Actually, the sandy ground there is not the goats’ usual habitat – their real home in the Wildpark has grass and hills to climb, but their shelter got flooded recently, so they had to move into this interim habitat until it is restored. This preliminary home is not ideal for them, because they sink into the ground with their hooves. Still, they were running around and having fun, and three little baby goats were fighting with their tiny horns. On this nice day, many people had come out to walk in the park and feed them. After our three pellet food packages were empty, Lyons Cub and mommy picked up the spilled food from other people outside the fence.

After the goats, we also visited the other animals again, such as the European wildcat, the alpacas, and the porcupines. Here is a video of Lyons Cub observing the porcupines, who have all “identical” names with the same pronunciation but a different German spelling: Günther, Günter, Guenther, and Guenter!!!! The otters weren’t out (maybe it was too cold), but instead, we saw the wild cat for the first time, which usually is always hiding! Before we drove home, we went to the playground in the park, and Lyons Cub got to show off his skills on the balance beam.

At home, we’re going to read the old classic, The Three Billy Goats Gruff, which I already liked in my childhood:

In 2013, I composed a piano solo piece for children, and my husband David composed the cello accompaniment; we named it “Billy Goat Gruff” and dedicated it to William (“Bill”) Cernota, David’s friend from Chicago, with whom he had played several summer concerts while he was a piano accompanist at SIUC. Here, you can hear David and Bill perform this piece:

3 thoughts on “… Visit the Baby Goats in the Wildpark?”