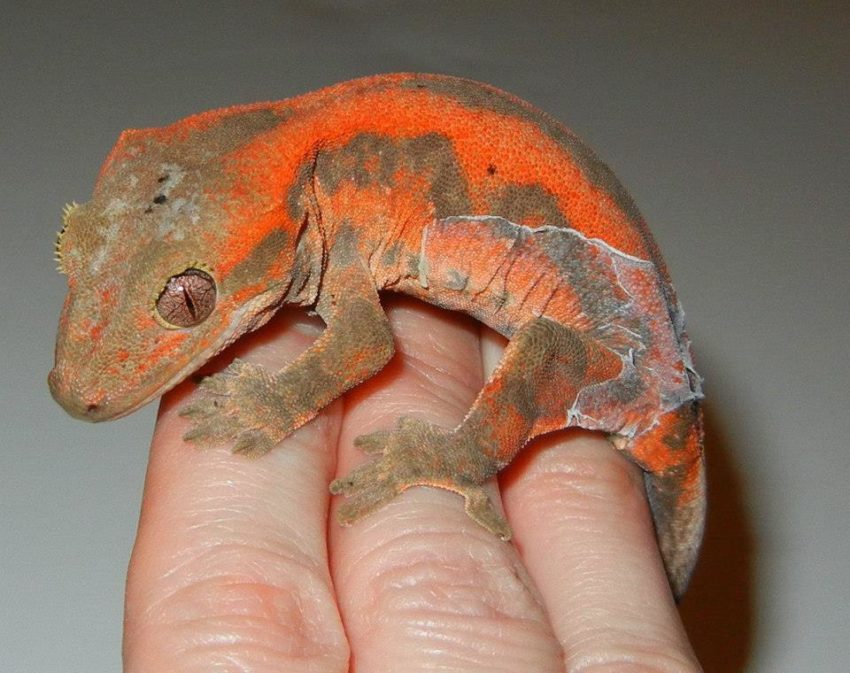 They are beautiful; they are frowned upon. Many reptile breeders admonish hobbyists not to “dilute the gene pool,” arguing that in nature, different species usually don’t mate, either. (Sometimes, they do, but generally, they live in different habitats and have different maintenance requirements, making a shared environmental niche more difficult). Reptile lovers who are against hybridization want to keep the lines “pure” and avoid “unlabeled” animals bearing traits of both parent species to infiltrate the market, so that in the end, a buyer doesn’t know anymore what the true genetics of the purchased animal are and continues breeding it, selling its offspring for something they aren’t.

Even if different gecko species rarely meet in the wild, sometimes, breeders will put them together to mate. If that happens, you would think the offspring is infertile, but that is not the case, at least not in these. I received my male hybrid, named Hermoso, from Kevin Saunders from Appalachian Ectotherms, who published an article about his hybrid group: https://geckotime.com/gecko-hybridization/ (The second and third photo in the article depict the gecko I bought from him.) According to Kevin’s statement, my gecko was a third-generation hybrid, whose father was a second-generation hybrid already (having resulted from a 50/50 or first-generation hybrid and a pure crested gecko), paired with a female crested gecko. This shows these gecko hybrids can very well reproduce. Here is his lineage certificate:

If you have a chahoua gecko and a crested gecko, you can mate the two and will get hybrids in the daughter generation (F1). You can breed those back to crested or chahoua geckos. The F1 hybrids are often extremely pretty animals, with reduced crests from their crested parent but a tail that can coil from their chahoua parent.

I’ve inserted a photo of my chahoua male and my crested male (“Pink”) for comparison. True chahouas are without any crests and have only short eye lashes. They’re mostly greenish/brownish speckled (nothing extraordinary), and they can roll their tails into little spirals! Cresteds cannot roll up their tails, and once they drop them, they don’t regrow at all. Cresteds are much shorter and plumper, and have long eye lashes and long crests (“crowned” means huge heads with long spikes) down their backs, and come in different colors (red, pink, yellow, orange, brown, olive green, gray, black, cream) and patterns (pin striped, phantom pinned, flame, harlequin, tiger, brindle, spotted, white walled, patternless). Both species live on the islands of New Caledonia, but in nature, they live in different parts and don’t interact with one another (at least, hybridization among them hasn’t been documented yet, to my knowledge). They can interbreed, as we have seen, and there once was the rumor that all their offspring is male (which Kevin Saunders could refute, since he knew of a breeder who achieved female hybrid offspring).

In addition, there is research about gecko hybridization and fertile hybrids, for example the article, “Experimental Crossing of Two Distinct Species of Leopard Geckos, Eublepharis angramainyu and E. macularius: Viability, Fertility and Phenotypic Variation of the Hybrids” by Frynta , Landová , & Lásková. Although it doesn’t deal with crested and chahoua geckos, it describes hybridization with leopard geckos, which I have bred from 2008-2014 when I still had my LZRGRL business. I find this article rather interesting. It also shows us the limitations when we talk about “pure” geckos, because how could we know if hybridization has already taken place generations ago in their natural environment?

In their conclusion, the authors state:

Look at a typical crested gecko and chahoua gecko, to compare their traits:

The hybrids out of a crested x chahoua cross usually stem from a chahoua male and a crested female. This is because chahoua geckos are very expensive (count on $600 to over $1,000 per adult animal) and crested geckos aren’t (depending on age and quality of the morph, assume $150 – $400). Thus, financially-inclined breeders will invest in a great quality breeding male chahoua and several high quality crested females. Laying eggs is tough on the females and can deplete their calcium reserves, so you wouldn’t want to bother an expensive chahoua female with hybrid eggs; also, females can become egg bound (= unable to lay their eggs, so they accumulate in their belly), and require costly surgery from a vet, or in the worst case, pass away. Thus, unless you have a scientific interest, from the economic standpoint it would make sense to breed a chahoua male to a crested female gecko.

The resulting hybrids have fewer spots than their crested parent, if it had been a dalmatian. They might have stripes along their back. Their colors can be an amazing orange or red, mixed with green and brown. Their eyes will be a maze of veins like those of both parents. Admire the beauty of my hybrid “cresthoua” (I did not breed him, and he was a pet only):

The hybrids have sticky feet and prehensile tails like both their parents. They are usually a bit bigger than their crested parent, but a little smaller than their chahoua parent. My Hermoso had orange stripes down his back and a few black spots on his head, body, and tail. He was able to coil his tail like his chahoua parent. He also had a very mellow disposition, was tame, and often came for hand feeding. He loved to hunt crickets, but his staple diet was crested gecko diet (CGD) from Repashy.

Some people say if “God” or “nature” had meant for different species to interbreed, it would have happened, and we shouldn’t assume that role and cross species that should remain separated. I think that it did and does happen in the wild, only natural selection takes place, and the hybrids are not favored as mates by any of the two species, since they don’t possess the traits most desirable to them (cresteds will probably look for great colors and long crests when searching for a mate, and chewies will look for size, length, and the mossy camouflage colors they are accustomed to). So the fact that we don’t find that many hybrids in nature is probably due to their not multiplying as often as same-species animals. They’re also said to be shorter lived, but nobody has done a study in captivity about this yet. Mine lived at least 5, maybe 6 years (he was already a juvenile when I got him).

In my opinion, the hybrids got the best from both species: the awesome colors of crested geckos, and the smoothness, size, and tail of Chahouas. Both species eat mango powder mixed with water, and can climb glass and have sticky feet and a sticky tail end. Interestingly, breeders have found out that when cresteds are crossed with species that can regrow their tails, their hybrid offspring can also regrow the tails.

Hybrids, just like their crested parent (but not their chahoua parent), can “fire up” and “fire down,” depending on mood:

Some breeders maintain that different species of geckos have different characters. I can confirm this; for example, Fat-tailed geckos (from Africa) just sit quietly on your hand and look; leopard geckos (from Pakistan/India) climb around on you and sometimes run away, but they’re still tame and friendly. Those two species will mate when put together, but the females don’t even get gravid from it, and nobody has ever produced a viable egg or offspring. That’s strange, because they look very much alike–but they’re from different continents, so there is an ecological and genetic barrier. Tokay geckos count as very aggressive and bitey.

Gargoyles and cresteds can interbreed, but I haven’t heard about their hybrids reproducing. They have the ability to regrow their tails, though. Gargoyles can be really cannibalistic and attack the smaller and weaker cresteds. Many lose their tails when breeding, anyway. Gargoyles don’t really want to be touched, and remain motionless most of the time, not interacting with people in any way at all (at least mine!). Cresteds can be tamed and sit on your hand, but they will leap around (in faces, onto furniture, wherever).

When I got my hybrid, the seller said, “he’s not a nice guy,” but he never tried to bite me in all the years I had him, and never even hissed or curled up his tail, what he allegedly did when he was angry. On the contrary, he was exploring his surroundings curiously, and he was not afraid at all. Most geckos hide for hours in their caves or behind plants or bark, but my Hermoso came to me for hand feeding out of a bottle cap.

I acquired Hermoso on April 9th, 2013, and he lived until November 2018. He was the star among my sticky-feet geckos and will never be forgotten; Hermoso is buried under the front yard tree where my son’s swing hung.