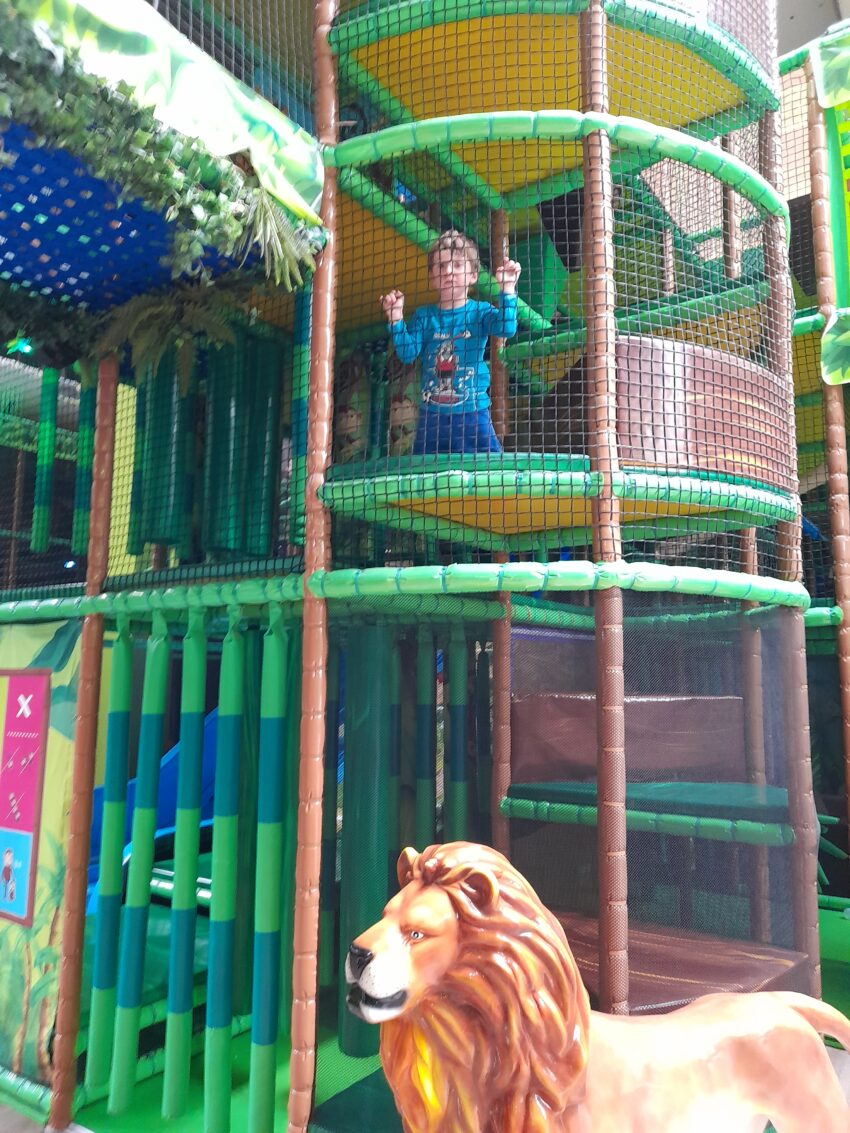 Lyons Cub loves indoor gyms, such as GeckoFun, which have lots of inflatables, trampolines, and climbing towers and bridges and slides. The biggest one we ever went to (with his little friend, Giulianna and family) is the Hoplop in Cologne. It has a huge play area for the children and a nice quiet area for the parents and grandparents to sit and watch. They won’t see much of their kids, though, since the indoor playground is so vast you lose track of where your littles are. Thus, either, run after them (and maybe climb around, too), or just trust in that their hunger will bring them back to you when it’s time for the chicken nuggets and French fries to get served!!!

The first thing my son did was slide down the volcano. GeckoFun in the city of Burscheid has a similar volcano, but this one here is easier to ascend because it has climbing handles.

Since we had travelled to Cologne with our friends, who have a two-year-old, we also went to the kiddie corner with the foam toys to stack and the ball pit for the littles. My son climbed all to the top of the foam tree, only to fall down between some soft, stacked wooden blocks 😉 He came out of the cave in the tree roots. “All good!” This mommy didn’t need to worry at all.

Of course, Lyons Cub just loved to jump into the ball pit and burrow deep into the balls, while the little girl was a bit more timid to take a dive into the rolling fun.

There were lots of different slides, and one of them was the snake slide. You climb up a jungle-like tower and make your way down inside the snake’s belly and out between her fangs:

Another attraction was the inflatable labyrinth where you climbed through yellow and green obstacles like pins and walls to make your way out the other end. This mommy found it made her a bit claustrophobic 😉 As long as the kids liked it…

In between all the fun, we had a lunch break. The kids and parents got big baskets of chicken nuggets and French fries, apple juice, and slushies.

We rode the go-karts, of course. They did cost extra, but there were two different paths you could drive. It was a longer track than at GeckoFun, but the go-karts went way slower. Also, in GeckoFun, 1-Euro coins fell out when my son crashed them into the borders, and here, nothing fell out 😉 I bet they were safer for the little kids’ driving skills 😉

Then, there was also a secluded place with game tables, where you could play one-on-one with somebody. That was more for the bigger kids, but it was fun with the preschoolers, too. To use those machines, you had to insert 1-Euro coins, though.

Of course, Lyoness was climbing with Lyons Club to check out the different obstacle runs. Mommy got quite out of breath in there:

What this mommy liked most was a place with floating balls, where you could shoot balls from yellow canons at other people. It was very high, so you had to do a lot of climbing on different levels. Each level had canons. From the levels, you could look down to an inside atrium where the table with the floating balls stood. There were other machines and devices that you could fill with balls, and they were sucked up through pipes. It was cool, like in a movie! You had to be careful not to get hit (by a very soft ball) 😉

By the way, there was also a row of nicely decorated rooms with different themes for rent where kids could celebrate birthdays in:

All in all, it was mega cool, especially for the kids. For the adults, the only disadvantage was that it was a little warm; no air-conditioning in the middle of summer. And the higher you climbed, the more you met the hot air rising 😉 So you’re all kind of sweaty when you climb to the top levels or just sit at the dining area. Oh well…. We’re in Germany, not in the U.S., where everything is nicely cooled. So wait until fall for your visit 😉

2 thoughts on “… Climb on the Hoplop Indoor Playground in Cologne?”