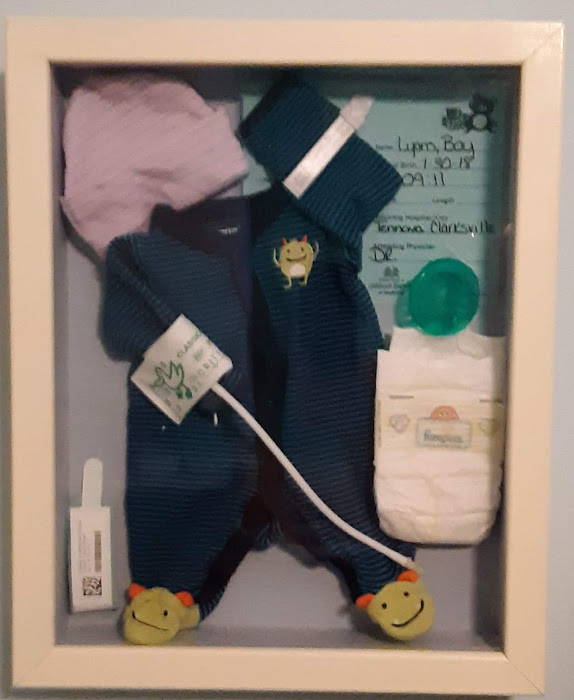 Whether you have had a preemie or not, you’ll probably want to create some kind of memory of your hospital stay (or NICU stay) to look at years down the road, to see how far he/she has come. Today, I’ll show you what I put into Leander’s shadow box. It’s easy to make, and there are no rules to follow (well, maybe one: don’t stuff too much into it! There are other places you can display baby memories, for example in baubles on your Christmas tree).

Just don’t throw anything away you used in the hospital right after baby’s birth! Who knows what you might be able to use it for….

Start with picking a shadow box that is deep enough for the things you want to display. If you have only photos and other flat items, they don’t need as much depth as clothes, bottles, or a first toy, for example. For the height and length, 14×10 should do, and for the width, I would pick 3 inches for thicker items, such as baby’s first shoes.

Let’s see what I put into Lyons Cub’s shadow box:

Of course, you can integrate other things, like ultrasound pictures, syringes or pill bottles from IVF treatment, baby bottles, baby’s handprints or footprints, etc.

The next question is how to make all this stick so it doesn’t fall down in your shadow box when it hangs on the wall. Some people fixate the items with little needles. I used Scotch tape that I rolled up in a circle and attached to the underside of the things (duct tape is even stronger). So far, so good. At one point, they’ll probably fall down and I need to glue them on or staple them. Try different things and just make sure whatever fixture you use doesn’t show on the front side. Some shadow boxes already come with pins.

That’s it! Now, all that’s left is to find a good place to hang it up (or, give it to grandma as a memento).