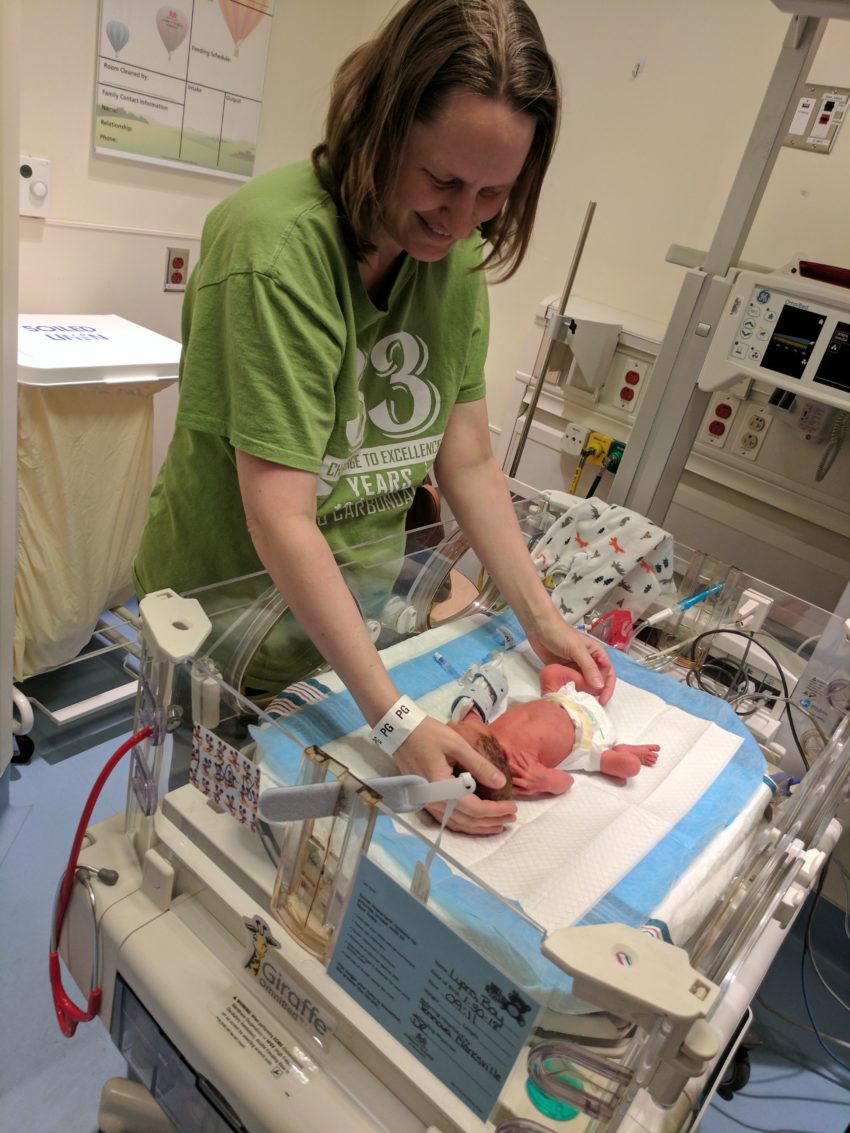 What gets to you most is the sound. The beeping of the machines, the alarms when babies have bradycardia (the so-called “bradys”) and when the monitors recording their heart rate and breathing go off, or even worse, when a baby codes. The constant crying and wailing of suffering little human beings, mixed in with the humming of the breast pump of a desperate mother trying to suck a little colostrum out of her swollen breasts, sitting on a rocking chair behind a loose curtain in front of her baby’s isolette, sheltered for a while from the buzz of life and death in the room around her.

When you have a preemie, you are not ready; neither physically nor mentally. Your baby should be inside of you, but for some reason, as in my case, a failing placenta, it came early. You might not have finished “nesting” yet, and your nursery still needs to be set up; you don’t have newborn clothes yet, but don’t worry, as they won’t fit for a long time, because your little one will be swaddled in the same old same old red-blue-white striped NICU cloth with wires hanging out at the sides, before even the preemie onesies will fit. Everything is tiny, the preemie diapers, the little button eyes, and the red hands and feet, but the purple NICU pacifier is big, almost as big as your infant’s head. (Funny thing, when my baby was ready to taste the first bit of colostrum after the NG tube had been taken out, the nurse said, “give him a little bit to try on the pacifier,” so I poured some of my pumped “liquid gold” from a bottle onto the top of the pacifier, thinking it was hollow and my son could suck it out…. I made a mess. She meant to put a drop of milk onto the sucker for him to lick off.)

I was lucky that I was allowed to stay with my baby 24/7; at least in the NICU he was transferred to right after his birth, as our local hospital was not able to treat such small newborns. We were at Vanderbilt in Nashville, Tennessee, and they gave us a family room where I could rest on a chair, while our nanny, who kindly had accompanied us for this emergency adventure, slept in the bed. I didn’t feel like lying down, anyway, due to my scar. I was glued and stapled and could not get up from my chair without a hearty push in the back! Also, my legs were very swollen, because they had pumped me full of liquids due to the blood loss, and nobody had told me they would look like an elephant’s. After three days, they returned to their normal size, though. We also got food from the Ronald McDonald House, and all in all, I felt very safe and well cared for at Vandy. The doctors and nurses were very friendly, decorated my son’s door and isolette nicely, and answered my many questions. Nanny and I bought them some chocolate treats when our stay came to an end.

I had to pump every three hours, including during the night, and due to a misunderstanding (the lactation consultant had said to pump for “15 minutes” every three hours, but I understood “50”), I became an overproducer, because demand creates production). In the first three days, my son received donor milk from other women, until my own milk came in. And since I was pumping (and later nursing), I received food for free. The best thing ever was kangaroo care; from day two on, I was allowed to hold my son. He was 3 lbs and 15 and 3/4 inches, but there were 1 lbs babies there, and he was fortunate in that he was not sick at all, just a “grower and feeder” who would be sent home if he passed his milestones: 1. keeping his temps up, 2. eating his full bottles, 3. passing his hearing test, and 4. passing the car seat test. He moved from “pod” to “pod” (in the beginning, it was a bit disconcerting, as I was thinking, “where is my baby? Is he dead? There’s someone else’s baby now in his place” – but then I understood that it is kind of like a promotion; as soon as he was better, he moved from the more critical room to one where healthier newborns were. On the last day, we got to do rooming-in, in order to get prepared for home life.

After a week, he was stable enough to be transferred back to our local hospital, and I went back to work. As a widow, I had to put food on the table myself, and as a non-citizen, I could not become a “charge” to the system, so there were no benefits. I used to be an Assistant Professor at a university, and they did not have maternity leave back then (they introduced it the year after I had my baby, go figure); I worked the night before my son was born until 7:30 p.m., missed a week of classes, and stood back in the classroom the following Monday. Our nanny had to drive me to work for two weeks, since I had a fresh C-section scar and was not allowed to drive myself (NOT because it hurt, but because I wouldn’t have been able to brake suddenly, as I was explained). I managed. After a week on pain meds and going six days without pooping because I was so scared it would hurt, I was back to normal. And after three weeks in the NICU, my itty bitty baby was over 4 lbs and allowed to come home.

We had a smooth NICU ride, no bumps. No brain bleeds, no NEC, no ROP, no nothing. Eyes and ears were fine. He was a little jaundiced, but his bilirubin values were not bad enough to require ultraviolet light. Just his growth and weight remained a problem due to his IUGR diagnosis, and he got Early Intervention to help with mobility. He sat at 8 months, crawled at 10, and walked at 14. At 18 months, we stopped Early Intervention, and he went to a Montessori kindergarten. He hit the growth curve at 9 months of age, and although he remains at the lower third, he is strong (and pretty strong-willed, too!), sportive, bilingual, and very smart. If you are a NICU mom, I wish you the best of luck to get through it, even if it sometimes seems like one step forward and two steps back. Our children develop at their own pace, and we were meant to be their mommies for a reason.

My son’s charted weight shows what an enormous amount of work lay ahead of us until he would reach the normal growth curve. He consistently progressed on his own terms, and the pediatrician was always satisfied with him. I was told he would most likely catch up by age two, and he managed at nine months.

P.S. If you need help from friends and relatives to accumulate baby items while your little one is in the NICU, you might want to try the Baby Registry from Amazon. I set one up for my son and received many useful items, such as clothes, bottles, crib sheets, toys, etc. It will prevent you from receiving things that you already have, or that another person wants to send you. It is especially valuable during the pandemic, because many relatives cannot visit you and baby, but they really want to contribute in some way. Also, you won’t need to go physically shopping with a fresh C-section scar, because the items are delivered directly to your door to any address you indicate. For me, it was a big help during a difficult time. (Disclosure: This is an affiliate link. This means that, at zero cost to you, I will earn an affiliate commission if you click through the link and finalize a purchase. It’s a win-win, because this way, you can help a little half-orphaned boy a bit, too.) 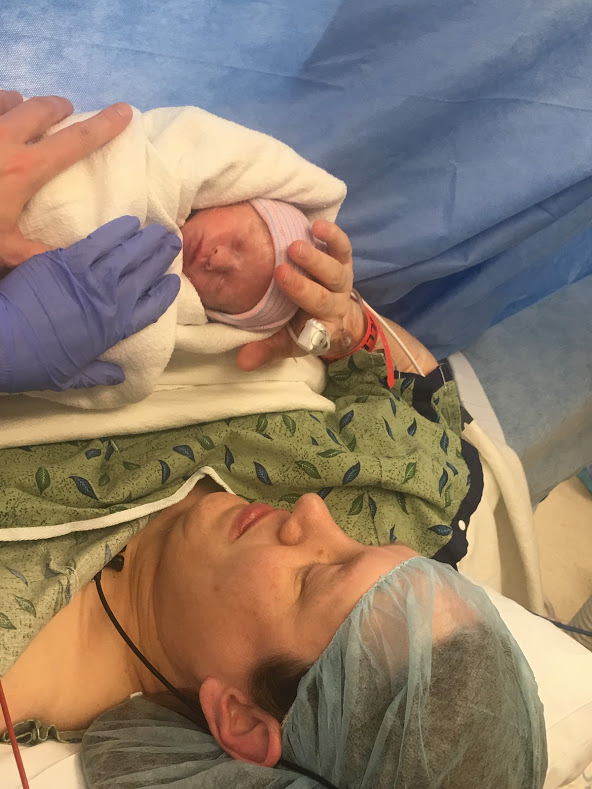