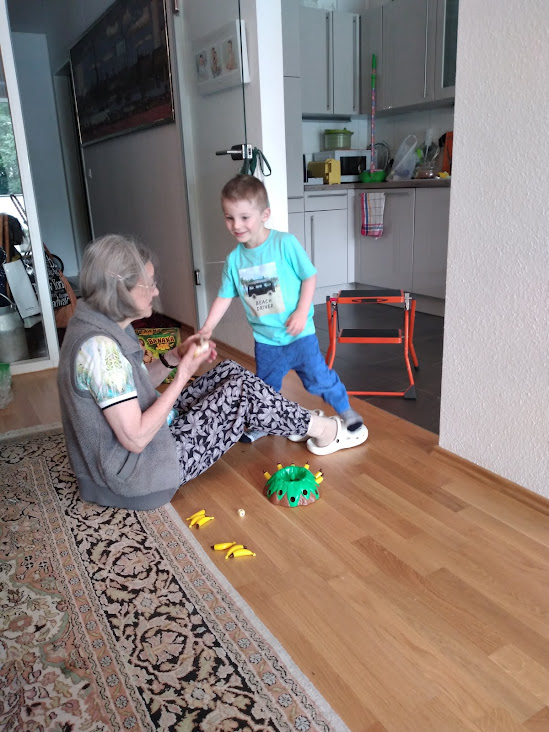 Do you have a toddler who hates to lose, too? Lyons Cub definitely needs to win all the time. Also, he didn’t quite understand that the person with the most bananas wins–he gave away his bananas to the other players freely. But dang, if anybody DARED to catch the jumping monkey before he could get a hold of it, he got mad! The game was fun for grandma lion and Lyoness, but it was too early to introduce Lyons Cub to it.

Banana Blast is fun when you follow the rules. The hands of the players are supposed to be flat on the table, so nobody is at an advantage when the monkey jumps and the players have to catch it. My son’s hands were hovering right above the monkey, ready to grab it 😉 We had to cut him some slack. At first, we weren’t sure if it’s always the same banana that makes the monkey jump–it’s a different one each time. Thus, it’s a surprise every round, and at rare occasions, when the monkey hadn’t been inserted right to start with, it never jumped at all, even when all the bananas had been taken out!

The game was able to make Lyons Cub giggle when he was surprised and everyone screamed as soon as the monkey jumped. But it also caused temper tantrums when mommy caught the monkey and not he. It says on the box that it’s for kids 4+, so maybe we’ll wait another half year and try it out again. In the meantime, he can play with it by pulling out the bananas or practicing catching the monkey.

In the following video, you’ll see Lyons Cub put all the bananas into the holes. He says to Oma: “Wenn ich alle Bananen da raus mache, dann fliegt der Affe in die Luft! Dann hat der Affe Angst.” (“When I take all the bananas out, the monkey flies into the air. Then, the monkey is scared!”) When he finally has inserted all the bananas and grandma is excited to play, he takes them all out again! Grandma tries to tell him the rules, but he just says, “Hör’ auf zu sprechen!” (“Stop talking!”) After all the bananas are inserted, Oma pulls the first one and the monkey jumps and scares the heck out of her!

In the video below, Lyons Cub rolled the die, which showed two bananas. Grandma told him he was allowed to pluck two bananas, but he protested: “Nein, ich muss ONE haben!” (“No, I have to have one.”) He rolled the die again, it showed one banana, and he was satisfied and pulled out one. Then, he examined the hole the banana left, and said to grandma (who doesn’t speak English): “Da ist ein Loch. Kannst deinen Finger da reinstecken.” (“There’s a hole. You can put your finger inside it.”) Then, he continues in English: “You can block the hole with this!” and plugs the die into the hole 😉 all the while grandma is still trying to follow the rules and takes one of his bananas away, because her die showed the “parcel,” which allows her to take a banana away from a player of her choice. Finally, Lyons Cub says, “Oma, das Spiel ist doof.” (“Grandma, that game is stupid.”)

Yeah, so we’ll re-introduce that game when he’s developmentally ready. The cover of Banana Blast is very appealing to little children, though; I didn’t know that game from my own childhood yet, so when we were in a store looking at some games to buy for our hotel stay, he pointed to that one and said he wanted the “monkey game.” It looked easy enough from the outside, but to introduce a game with dice, order, and rules is definitely too early right now.