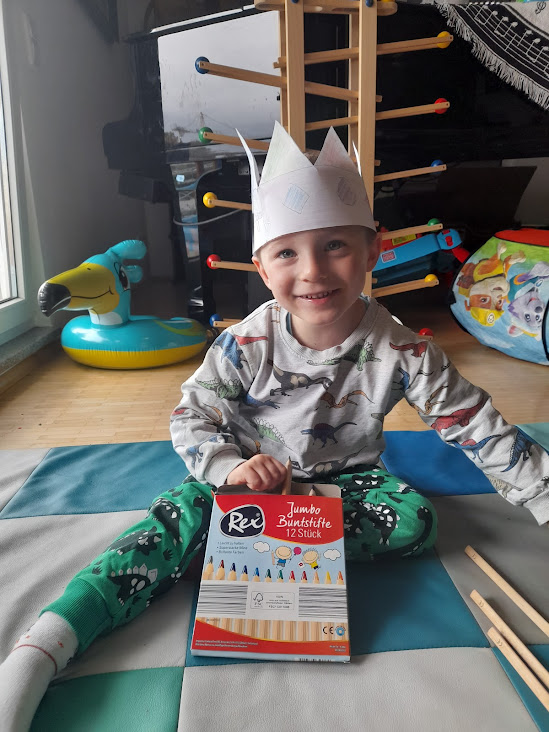 Does your toddler also have the problem that the pants slide down his butt all the time? It’s important to me that my kid is well dressed. My son has short legs and is slim around the waist. This means that jeans and most types of trousers without an elastic waistband don’t fit him, since they slide down his bottom when he runs. It makes grandma crazy and she’s always following him around, pulling up his pants. She’s especially embarrassed since it reveals he’s still in diapers (we’re working on it).

However, I found these cute blue dino pants that fit him very well and never show his underwear. The ribbon is unnecessary, since the elastic holds them up excellently. They exist in different colors and patterns. Lyons Cub has tigers, monkeys, The Gruffalo, and lots of dinos. It doesn’t matter that his legs are a big short (due to his IUGR diagnosis), since those pants can be baggy; they still look great on him and he can grow into them. He’s almost four and just graduated to the three-year-old size for pants. They are soft and comfy, and not as stiff as jeans (which are always too long for him, or would require suspenders to stay on him).

The dark blue dino pants are great for the outdoors. Lyons Cub wears them when we go to the park and when he will play in the sand and dirt. They’re also perfect for eating chocolate ice-cream 😉 He has the same style of pants with monkeys and with dinos. I have to say that the dark blue ones lost a bit of color when washing them for the first time, so make sure you’re not washing white or lighter stuff at the same time.

Beware of the Gruffalo pants, though. They look beautiful in the beginning, but after a few washes, you cannot recognize the Gruffalo anymore (see pic below) since the thin lines disappear. This doesn’t happen with the other pants of this brand. What a shame, because my son loves the Gruffalo book, especially The Gruffalo’s Child!

I really like the multi-colored dinosaur pants we got from MyToys, which were part of a jogging suit. Lyons Cub wears those on Sundays and for visits to family or walks in the city. They radiate happiness with all their colors. Moreover, the outlines of the dinosaurs are really detailed.

The tan dinosaur pants have a matching sweater that my son wears with different trousers, so he shows a bit more color. I like their simplistic design, which also contains volcanoes that he loves. He wears those when we go out, like to the mall, or to pick up grandma. They are a bit more suitable for social occasions, if not celebrations; any place where they will not get stained very much.

Finally, the green dinosaur pants fit very well with Lyons Cub’s colorful sweaters and don’t show dirt as much as his tan dino pants 😉 They are his mud pants. He wears them in the sandbox and in the park for climbing and playing. They have been washed many, many times and still retain their color. He took the ribbon out, and he doesn’t need it, anyway, because the pants have an elastic waistband.

If you liked this short discourse of the dino pants he wears, maybe take a look at Lyons Cub’s dino sweaters 😉