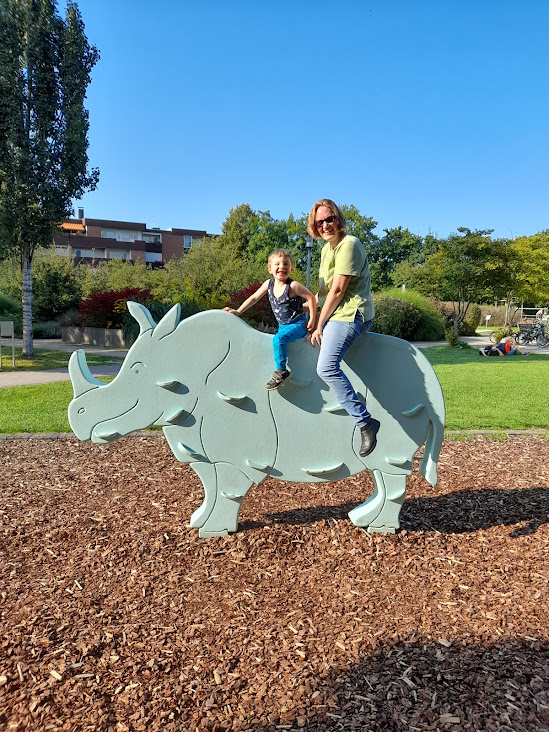 Do you also have an active, sportive child that needs constant outdoor activity? I soon was at my wits’ end what to do on the weekends. We’ve already tried out all the playgrounds in the near and far neighborhood. Nothing was enticing enough anymore (“No, mommy, not this one!”). Until, one day, his older cousin (from whom he also got the oversized raincoat) showed my son a picture of her sitting on a high climbing elephant! Of course, Lyons Cub wanted to travel there, too. It took mommy a while to find it, but one rather rainy late-summer day, we made our way there, and sonny boy got to sit on top of not only an elephant, but also a rhino, hippo, giraffe, and monkey!!!

It is no small feat to mount a slippery elephant in the rain with heavy rain boots on 😉 Of course, mommy helped, because some of the animals were rather high. Lyons Cub always wanted to sit in the “wrong” places, like in front of the horn of the rhino, on the tail of the hippo, or on the neck of the camel. The giraffe was the trickiest, because one slid right back down its neck!

The park also has a big fountain with a bridge leading over a lake. Although he wasn’t allowed to feed the ducks, he had fun watching them, especially mommy duck with seven babies! Siberian geese were there, too, in a small flock on the lawn. He had a lot of respect for them (and mommy was glad he didn’t walk over to them onto the lawn, because she didn’t want to have to clean their poop off his shoes).

Lyons Cub learned to move slowly, so as not to chase the birds away, and to observe them from afar. It must be difficult for a child to understand that you don’t have to be right in front of an animal to watch it.

Right next to the climbing animals is a parcours for healthy feet. One walks barefoot in a half circle on smooth stones, wood chips, round wooden beams, grass, cobble stones, sand, etc. Even if most people are born with healthy feet, due to wearing shoes, deformations of the feet sometimes happen, so it’s important to take care of one’s feet and take those shoes off and expose the feet to nature occasionally. Here’s a video of Lyons Cub walking along the “healthy feet path”:

Another highlight of our trip to the park was the playground with the huge pirate ship. Due to the inclement weather, he was the only child on it, though. He had to try out everything and was especially intrigued by the aquaduct. The shark rocker was really cute. Usually, one sees horses, dogs, and motorcycles, but a shark? That was a first.

After riding on the shark, Lyons Cub announced that he wanted to run up the big, green hill! And so he did, followed by gasping mommy, who carried his picknick, rucksack, and pushed his stroller. Arghhhh… This boy for sure keeps his mommy active.

Our last station was the amphitheater, where he performed a short dance (“nur ein kurzer Tanz!”) in the middle, and on the steps of which we ate our picknick (the salty pretzels we had baked in the morning and orange juice out of a carton).

That night, he slept really well after all this running around, so it was a win-win 🙂

3 thoughts on “… Climb With Your Kiddo?”