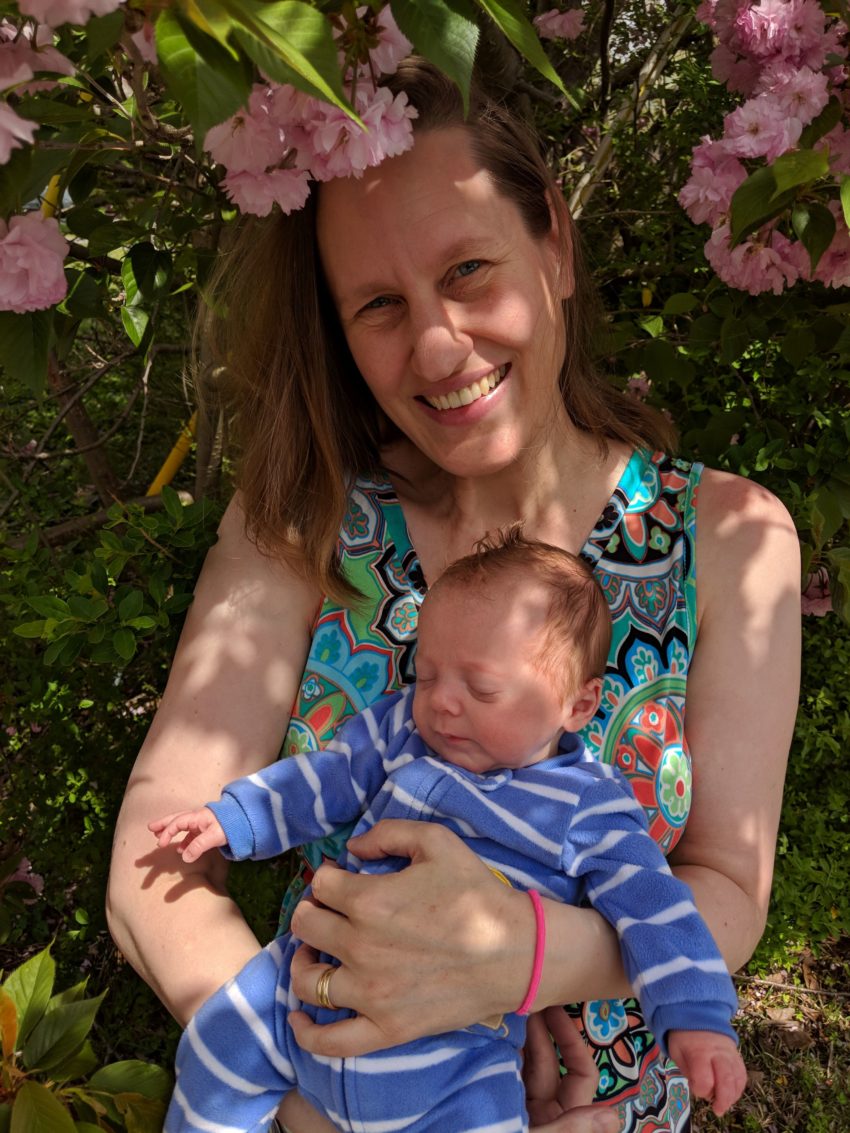 “Is he your grandson?” asked a guy at the Christmas market when I was pushing my son’s stroller along the booths. “Have you never seen a mom over 40?” I thought, dismayed. Not every girl finds her true love in her twenties. I met the love of my life at 38, through my job at a university. We married when I was 41, we started IVF, I became widowed at 43 and had our son at 44. So what. It doesn’t mean I don’t have the energy to be a good mother. I can still climb on playground equipment and play soccer and hide-and-seek. I find it offensive if in the medical field, women over 35 are considered “geriatric.” Come on, guys! Genetically, we are disadvantaged, yes; lower ovarian reserve, lower egg quality, and a higher risk of Down’s Syndrome, but nowadays, with IVF, embryos can be tested, and we get pumped full of estrogen and progesterone to mimic a younger body. Besides, when a woman over 40 has a baby, it was most likely planned and long desired, and a baby with a disability is as much a blessing as one without. I produced so much milk that some young gal who dried up quickly would have been green with envy. I read on the online forums how younger mothers discussed how to increase their supply with fenugreek (Mother’s Milk tea, lactation cookies, etc.). My problem was the opposite; I always thought, how will I get through the next class, meeting, or seminar without dripping onto the table for all to see.

Don’t underestimate our mature bodies. For some women, career comes first, and then it takes a while between all the work and duties to find the right partner. I read that big tech companies, like Google, Apple, and Facebook, even pay their young female workers to have their eggs retrieved and cryopreserved, so they can stay in the workforce longer and have their babies when they are older. That’s what I’m taking about. At least, I can say I’ve seen parts of the world, traveled far, met different kinds of people, had my career and a wonderful partner, a nice house, and was simply ready now for something new: becoming a mother.

I was lucky to have had a very easy pregnancy. Except for PUPPPS (an itchy, blotchy red rash on my belly, thighs, and arms), I did not have any adverse effects, such as nausea. I puked a single time, in my first trimester, and nearly fainted once around that time. After that, I was strong enough to move states, assemble my own furniture, create the nursery, and go to work until the day before I gave birth – which happed at eight months, due to a failing placenta, which can happen to any woman and is not an indicator of age. I did not show very much (I remember how my sister was able to put her glass on top of her pregnant belly; I would not have been able to use mine as a table), probably because my baby was growth restricted, which happened at the beginning of my third trimester. I did have cravings, mostly water melon and Chinese food, nothing out of the ordinary. And my sense of smell was acute. The thing I hated to smell most was gasoline; driving behind a stinky car became rather unpleasant. Apart from that, I loved loved loved being pregnant.

The first week of my son’s life, which he spent in the NICU at Vanderbilt in Nashville, I was with him around the clock, as I slept in the clinic, too. However, the following two weeks I was bound to visiting hours at my local clinic, which I had to integrate into my work schedule. When you’re a single mom and green card holder in the United States, you don’t get any benefits, as you would become a “charge” to the host country and would have to leave. Thus, I could not take any time off from work. To combine teaching with pregnancy was okay for me, as I felt very energetic (although I was jealous of the women in my home country, Germany, who get paid maternity leave and can take between 1 and 3 years off work and still get their old job back); however, to commute between NICU, workplace, and home to feed the animals (two Labrador Retrievers, two cats, two guinea pigs, and eight geckos) was much more taxing. I would not have managed without a great nanny, who took most of the animal and house care off my shoulders and raised my son lovingly for the first year of his life. That’s when she suffered an accident and could not work for an extended period of time, and I hired two more nannies after her. My son Leander loved them all; he is very trusting and outgoing and wins over any heart with his mischievous charm. Just as an example, this is what my daily schedule looked like while my son was still in the local NICU:

At night, I had to proofread papers and create lesson plans, so I had my son lying next to me while pumping and working on my laptop.

The NICU was about 20 minutes from my home by car, and not much further from my work place. I was lucky that I didn’t have to travel for many hours, and that I could basically hop from one place to the other. I pumped every three hours, and my pumping sessions were from 15 minutes to an hour long each time, depending on where I was. While in the NICU, I could take my sweet time, but while at work, I had to glue paper with scotch tape over the glass window in my office door, so that passing students and teachers would not see me in my pumping gear. I hurried to squeeze in a quick pumping session between office hours and classes, so I wouldn’t drip through my dress. The silly pads one is supposed to stick in one’s bra to catch the leaks didn’t work for me at all. Only once did a student burst in without knocking, which caused me to frantically disentangle myself from my hands-free pumping bra and plastic pumping parts. I had a small fridge in my office to store the breastmilk. I went through five breast pumps during my one-year pumping career. One blew when I plugged it into a German socket (I didn’t know that the adapter alone wasn’t sufficient), and the others’ engines just gave up at some point. But it was all worth while; my itty bitty baby reached his growth curve. Just as I was about to end my pumping marathon, the Internet announced the invention of a hose-free, portable pump (Elvie) you can stick to your breast while driving. If I had been earlier in the process, I might have considered that.

Where I really felt my age was when I considered joining the local Stroller Strong Moms to stay fit and get rid of the baby belly faster; I thought they’re a group walking with the strollers together and doing some gentle fitness exercises now and then – but when I saw them sprinting from one end of the soccer field to the next in the torching summer heat, I thought, nope, that’s not for me. I mean, just look at them on their website; young, strong, determined, with an army fitness trainer… I need a softer approach. I have to preserve my strength for the daily arts and crafts sessions with a toddler, which require deep cleaning afterwards. Being pregnant in one’s 40’s was pretty isolating, and being a new mom even more so. While I was in my first and second trimesters, I still went to yoga with a colleague from work, but towards the end, that became a bit too bothersome, and once my son was there, I had no time for extra-curricular activities at all. Therefore, I met very few people. Occasionally, I did go walking with two young army wives who lived around the block, and we all three pushed our strollers – but those ladies were half my age. Also, I was not military, so I noticed quickly that I don’t really belong. I lived in Clarksville for more than three years and did not make any friends.