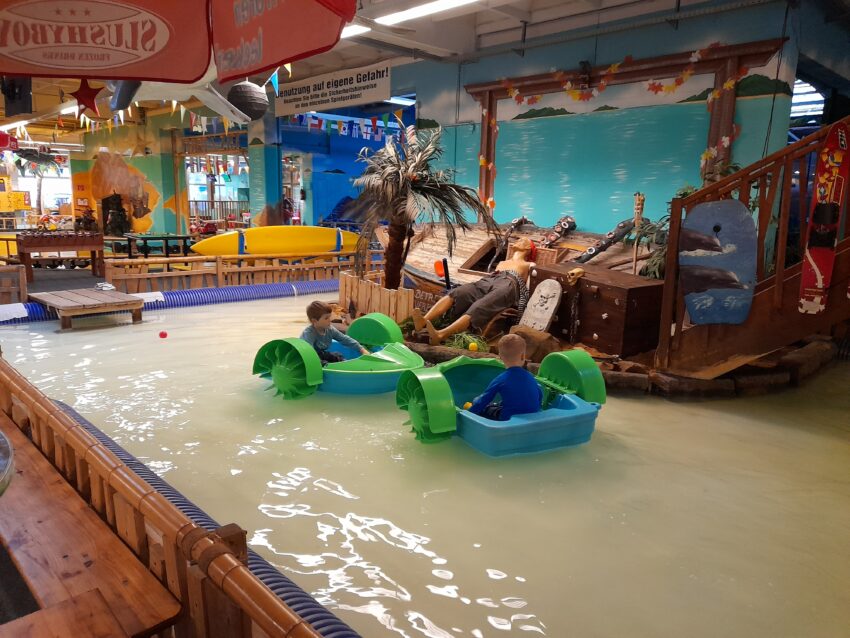 What’s it like to go to Tiki Kinderland in Solingen? Well, we discovered yet another indoor playground in North Rhine Westphalia. We already know GeckoFun in Burscheid, Hoplop in Cologne, Okidoki in Langenfeld, Trampolino in Hilden, and Hugodrom in Remscheid. This one here has a specialty that the other ones are all missing: Water! It actually has a little (not very deep) “lake” with two boats that are operated by rotating levers with the hands.

Tiki Kinderland has lockers to keep one’s valuables safe while exploring the attractions. There were many different kinds of climbing constructs, donut slides, a rope course, a lake, a scooter track, a minigolf course, a bowling alley (mostly for older kids and adults), a pirate ship, a castle, a palm tree, and inflatable clown fish… The opening times were 2 p.m. – 7 p.m. on work days and 11 a.m. to 7 p.m. on holidays.

Right when you enter, you happen about the bowling alley. Only two people can play at the same time. It is quite long, and although my son tried, he didn’t get the balls until the very end; they were just too heavy, and the distance was too great. So mommy played bowling next to a teen, because we had already thrown EUR 1.00 into it, while Lyons Cub ran around trying out different things.

He enjoyed the climbing castle with the slides:

Then, Lyons Cub played one of his all-times favorites, knocking gophers that pop out of different holes:

For the parents, there were many seating opportunities next to the restaurant. We ordered chips, Fanta, Coke, and some chocolatey snacks.

The rope course isn’t a high rope course like in Okidoki in Langenfeld or Trampolino in Hilden; rather, it’s about thirty centimeters above ground and for little kids to practice keeping their balance. Still, Lyons Cub enjoyed it quite a bit and went through it twice:

There were only two green boats on the lake. Luckily, this mommy had brought a bath towel, because the boats were full of water. We cleaned one out, Lyons Cub took off his anti-slide socks, and off he went. Since it was Christmas week, only a handful of children were present, so he and another boy his age were the only ones interested in the boats, which was great. They bumped each other a few time, but my son figured out pretty soon how to operate the handles to turn left, right, to the front, and to the back. There was a pier and a long stick to pull the boats on land. My son took on the task of cleaning the lake from the little plastic balls from the ball pit that had fallen into it… 😉

The palm tree was quite easy for my son to climb, and he could let himself fall down into the thick, soft mat. It’s not comparable with the much higher climbing volcanoes at GeckoFun or Okidoki, but he had fun, anyway.

As in almost all the other indoor playgrounds we have already been to (except for in the Hugodrom), there was a scooter track. It was small and just one circle, but it had a nice variety of cars and motorbikes.

Right in front of the scooter track is the minigolf course. One has to rent the clubs at the reception desk and deposit one’s ID for them. So we got our clubs, and Lyons Cub got to show off his skills. He really managed to get the ball through the castle and into the volcano (mommy didn’t). The most difficult course was to knock the ball through a canon and into its hole.

All in all, we liked it there and will probably go again, but next time, we’ll start at 11 a.m., so we have more time to do all the different things.