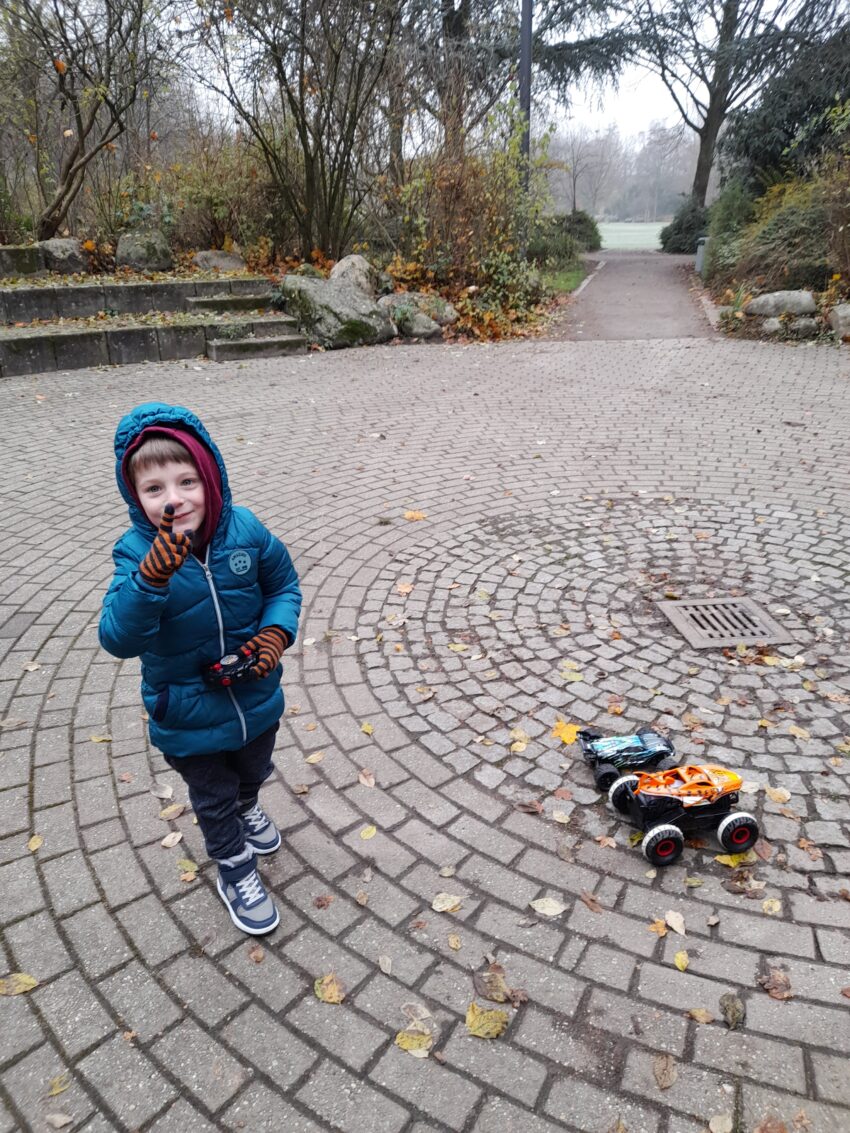 Lyons Cub had a visit from Santa Claus on December 6th, 2022. He brought him many a treat, because he had kept his promise from last year’s visit, not to need diapers anymore. Sonny boy also had to promise to get better at getting up early in the morning without grumbling and going to bed nicely in the evening when it is time for little boys. And there was one package that Saint Nick didn’t hand over that day, because it arrived too late in the mail.

The bigger was his surprise today when he still got a gift four days later:

He unwrapped Tiger Shark, the Hot Wheels monster truck he had talked about incessantly for the past few weeks. What joy! It was super easy to get going. You have to charge the battery pack inside the truck by connecting it with a USB cable (included) to the wall socket (adapter not included, but we used my cellphone adapter) for about 90 minutes. Then, you insert two AA batteries (not included) in the remote control, put the black button at the underside of the truck in ON position, switch on the remote, and off it goes.

First, we did a few test rounds on the street, where Lyons Cub met some friends who admired his Tiger Shark.

Then, we drove to a park where we had more space to do a car race, since mommy also got a remote-controlled car from Saint Nick, a HAIBOXING monster truck with a cool skull sticker on its roof:

The Tiger Shark can drive with one or two wheels in the air (looks like it’s dancing) and stand up on its rear wheels like a wild horse. When it chases a kid, it looks like it’s snapping 😉 It drives on an even asphalt road, on grass, and even on cobble stones and dirty paths, but it makes quite a clatter. Mommy’s truck was almost silent compared to it (plus, it has front LED lights).

Lyons Cub’s monster truck is definitely the better choice for little preschool kids, while mommy’s truck was for over 14-year-olds and needed to be assembled first (you have to take the light plastic top off to install the charged battery pack), and you also need to put the stickers on yourself. The Tiger Shark came ready assembled.

When you want to do a race, though, mommy’s car was clearly superior, because it can steer more easily and goes much, much faster. But it can’t dance and gets stuck as soon as it hits a bush, whereas the Tiger Shark is bigger and stronger and can free itself better. Thus, we were both very happy with our gifts!

Since it’s freezing cold today, we went for a nice, hot noodle soup at grandma’s after the park, and then returned home, where we took our trucks out again in the evening:

We found out that our remote-controlled monster trucks also managed to drive fast on frozen leaves and the woodchips of a playground. Great products!