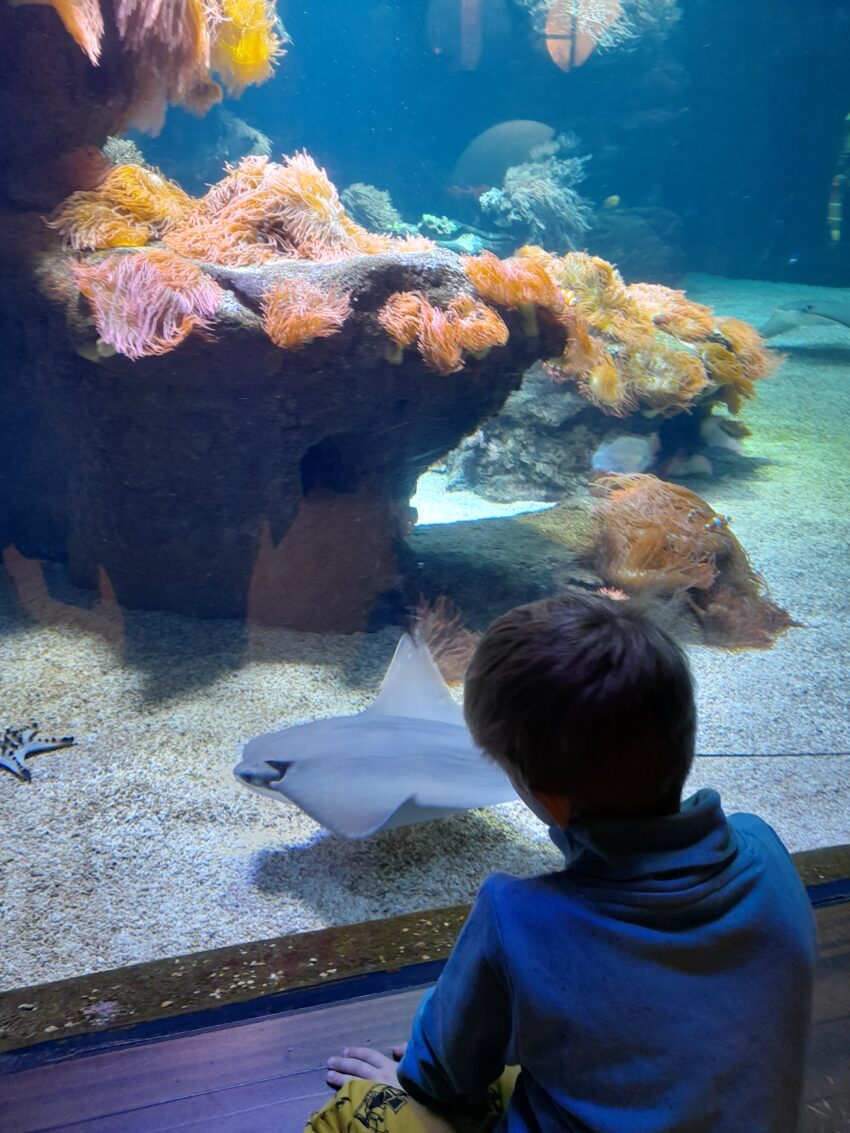 When Lyons Cub was 1.5 years old, we visited the Aquazoo in Duesseldorf during our summer trip to Germany. This fall, we came back. As a 4.5-year-old, Leander could appreciate the animals and especially the interactive learning stations much more already. Except for the parking situation, which was a hassle, and the many visitors, we really liked this outing, and I’m sure my son learned a bunch.

An info page about sights to see in Duesseldorf describes the museum this way: The Aquazoo is a mixture of a zoo, an aquarium, and a natural history museum based on the theme of the evolution of biological diversity. It features 25 rooms with exhibits ranging from the development of the first water organisms, their ocean habitats, their way into freshwater, to their occurrence in terrestrial niches. The Aquazoo is trying to protect the biological diversity through conservation, research, and breeding projects.

We drove there with grandma on a weekend where rain was forecast in the morning and nice weather in the afternoon, so we would be inside in bad weather and have the opportunity to go to a nice playground right in front of it when the skies improved. It worked out like a charm!

Although we arrived in the morning after having booked an exact time slot online, most parking places on the big lot in front of the building were already taken, and it was very busy. Also, ALL the machines where to buy the parking ticket (we tried out FIVE!) were broken (!!), so we ended up not having to pay, like all the families arriving around the same time 😉

Upon entering, you see a huge sperm whale skeleton. It was behind a barrier and not for touching, but there were enough interactive stations for the kids where they could touch things and experiment with them.

You can also admire a big shark tank and a live coral reef with a diversity of invertebrates and fish. My son loved the transparent squids. There were columns with integrated videos and digital slides that explained what you saw, and they were so low that the children could assemble in front of them and learn about the sea creatures exhibited.

The moray eels was really creepy:

The big stingray had a smiley face on its underside:

Lyons Cub learned that stingrays can shock you with electricity. I didn’t tell him that Steve Irwin was pierced by one; he’s too young for that yet. Instead, he admired the orange-and-white clownfish:

Because there were so many visitors, my son spent a lot of time at the learning stations until the other people had walked past and he got a space to stand in front of the big tanks and look at the fish. There were steps for short kids to stand on, so they could see equally well.

Lyons Cub learned the expression, “a school of fish” (well, he actually knows about that from one of his favorite books, Swimmy by Leo Leonni. However, this is a term that cannot be translated into German literally, since we do not say, “Schule” but “Schwarm” when fish are considered.). But now, he got to see different schools of live fish for the first time:

A highlight for the kids were the interactive stations for experiments, the microscopes, and the tactile installations. Here, Lyons Cub s measuring the salt content in different water samples by holding a probe over the lid of various cups with water from the Rhine River and other sources of water. Even if the little kids didn’t know what the numbers meant, they had lots of fun with this little science experiment:

Leander loved the enlarged representations of mosquito and fly larvae and water fleas. They looked so scary when they were as huge as in a horror movie!! It was cool to see them in detail with their hairy legs and antennae. Especially fascinating were the caddisfly pupae that build protective cases out of tiniest river rocks:

Then, we ventured into the tropical hall that housed crocodiles and lots of extraordinary insects, amphibians, and reptiles. On our way there, Lyons Cub had to try out the baby ramp that the littles could climb up and down for fun:

The penguins had their habitat right before the entrance to the crocodiles. They had a waterfall and a glass dome. Lyons Cub couldn’t wait to leave them and see the crocs, though! The big, spiky iguanas crawling around on their branches were very impressive, too. My son also rubbed the shiny head of a metal gecko (more about the statue rubbing cult in Germany can be found in the recount of our visit to the Duisburg Zoo)

Having left the tropical hall, we came past another learning station where the children could put their hands into dark spaces to feel certain shapes, like a statue of a little frog. In addition, there were buttons that played the sounds the amphibians made when the kids pressed them.

Then, we ventured into an exhibit of deep sea creatures such as octopi. Lyons Cub admired a replica of a big sea turtle and her eggs buried in the sand. There was a marine biology station the kids could go inside and watch some films and pictures:

We liked the learning station about the Cartesian diver. It is a toy named after Descartes, who allegedly invented it. The first written evidence of it stems from 1648. It is a classic science experiment demonstrating the principle of buoyancy. The principle is still used today to make small toys often called “water dancers” or “water devils”. In the constellation below, a simple glass bottle filled with air was used instead of a figurine. The bottle falls when the large container is compressed, and rises up when the pressure is released. The child standing in front of the construct presses a foot pedal to apply pressure and takes off his/her foot to release the pressure. Lyons Cub and another boy had lots of fun trying that out. I don’t remember this learning station from my visits to the Aquazoo when I was young, and I think it’s a great addition to teach children about physics.

Finally, we went to a learning station where the children could observe different critters like mosquito larvae and water fleas under a microscope. In addition, there was a tower where they could make a fake phone call to call for help if one got stung by a sea urchin or a weever, which causes a lot of pain:

The last animals we visited were the dwarf mongooses. Children could observe them through a tunnel with narrow windows:

Before we left, Lyons Cub donated a few cents to the museum (he loves to throw coins into those huge bowls):

Afterwards, we went for a stroll through North Park and enjoyed the flowers and trees. There is a circle with different flower beds, and my son and I raced around it:

Lyons Cub got to play on a playground, which was a little wet, because it had rained before, but he still had fun on the climbing towers and the merry-go-round:

After this eventful day, we drove back home with a very tired and satisfied boy snoozing in the back seat.