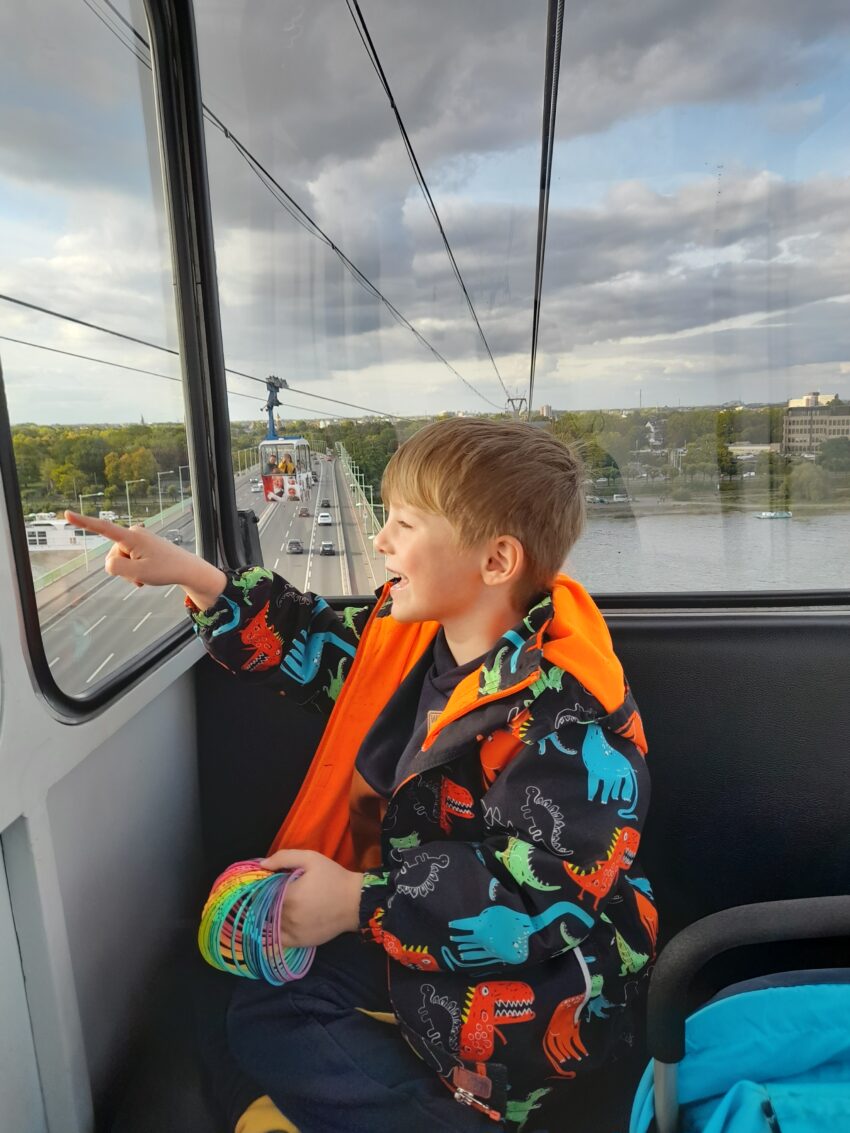 My son has been to Cologne a couple of times already, once to visit the Chocolate Museum, see the Gothic cathedral, and take a panorama trip on a ship on the Rhine River with our friend John from Virginia, and once to play with his friend Giuliana at the indoor playground, Hoplop. This time, we went with mommy’s friend from work, Mrs. Fohrer, to visit the famous Cologne Zoo.

Right at the entrance was a fun activity for little kids: An interactive station, where you could figure out which poop belongs to which animal. Thus, to get the solution right, he had to turn the picture of a goat to match the replica of goat poop. My son and the other little kids around him liked this activity very much! The right order of poop samples from left to right was: Pig, chicken, donkey, cow, and goat. This reminded us on one of our favorite children’s books about the little mole, who wanted to know who made poopy on his head.

The first animals we walked past were the flamingoes (a word stemming from the Spanish “flamengo,” meaning “flame colored”), and Lyons Cub noticed rightly that they stand on one leg, and imitated them, as you can see in the pics below 😉

Then, we walked past some farm animals (goats, pigs, and horses).

The sitatunga (or, marshbuck) is a swamp-dwelling antelope found throughout central Africa.

This aardvark in its cave was very sleepy:

6. The Crocodiles & the Hippo, and Lots of Fish

We saw some resting crocodiles, too. One was a mummified crocodile from ancient Egypt:

Alas, the hippo didn’t appear; we just saw bubbles in its tank. At least, there were beautiful, slow-swimming fish that Lyons Cub could admire:

A little, cute stone hippo was there, though:

This is a search image, because the leopard was very hard to see, lying on top of a grassy hill and sleeping. From time to time, its tail was waving in the air.

8. The Small Playground With the Wooden Animals

Then, we absolutely had to go to a playground. There was simply no walking past it 😉 It was a gorgeous playground, though. It had animals carved out of trunks, like hippos and crocodiles, and houses to climb into, where birds and giraffes looked out of the windows. There were climbing constructs that attracted Lyons Cub immediately. He did have to stand in line until some toddlers were done climbing, though. Patience, patience…

9. The Monkeys in the Madagascar House

In the Madagascar House, we visited the lemures and other kinds of monkeys. They were so fluffy and climbing on their branches or swinging in their hammocks. So cute!!!

The giraffe house was empty; there were only some wardens cleaning the cages–the giraffes were all outside in the sunshine:

Slowly walking through its habitat was a big, bulky rhino:

The elephants had a beautiful territory that you could observe well from a seating area with the skyline in the background:

Even better was the view from a high lookout:

13. The Huge Playground with the Pirate Ship

The second playground we went to was huge. It was right next to a kiosk where we bought French fries and lemonade. The adults sat down to talk, while Lyons Cub went to play after he had his lunch. There was a wooden pirate ship, wood climbing constructions, metal climbing cages high up in the sky, and so many cool things that occupied him for quite a while.

A pictoresque island harbored lazy seals lying in the sunshine. One was especially cute. Some swam in the water, and we even saw a little one.

The penguins lived on an island and waddled clumsily around on their rocks or peeked through holes in the rock walls.

The birds had elaborate cages above the visitors’ heads, enabling them to fly from one aviary to another one, with bridges and domes and high perches:

We saw beautiful red as well as blue-yellow mackaws.

The most beautiful bird we saw was, without doubt, this one:

Then, we observed how a big bird, a southern ground hornbill, proudly carried its prize, a mouse, to a place where it wanted to settle down to devour its lunch, but some other, even bigger birds (marabou storks) came running and croaking, so it dropped the dead mouse and fled, and another hornbill picked it up and carried it away. How unfair!

The highlight for us today were the baboons. They had an island with a moat all for themselves. A female was delousing a little one that sat in front of her on a wooden beam. We observed a big male making weewee, which my son found hilarious.

Shortly before we left, we observed a sun bear, who stems from Southeast Asia. It was climbing on a tree trunk and roaming its hilly habitat peacefully. At first, I thought it was a spectacled bear (because we had passed its empty habitat before), but then I saw the correct sign. This one here did for sure not wear “glasses” 😉

We walked past the camels. One had a hump that was bent down on one side, as we had previously observed at Circus Florida. And here’s the explanation: Camels store fat in their humps. When a camel has used up the fat stored in its hump, the hump can droop and bend down; when it eats proper food again, the hump rises up again, too. Interesting.

If you’ve never seen a drooping hump, check it out here:

Afterwards, we watched the raccoons (which we were able to observe in Lyons Cub’s home, Tennessee, in nature) and the meerkats, in whose cage we spotted some Halloween decoration:

All of a sudden, we stood at the exit. At the end of our zoo visit, we said good-bye to our friend, Mrs. Fohrer, and went to the zoo store,

where Lyons Cub purchased a huge, blue snake (it’s destined to lie in front of his door in winter, to avoid the cold draft) and a slinky toy (which mommy would have to detangle in the weeks to come).

22. The Sightseeing Train through Cologne

After that, we boarded a little sightseeing train (“Kölner Bimmelbahn”) to make a short trip to the Gothic cathedral and back to the zoo.

23. The Gondola Ride across the Rhine River

After a bit more than half an hour, we arrived back at the zoo, where we made our way to the entrance to the gondolas, which my son absolutely wanted to ride. This was one of the most exciting events in his short life so far!

You could tell that the Rhine did not have very much water after the summer drought. The sun was setting already, and the sky looked fantastic. The water had a silvery shimmer, and we watched the lines of the speed boats.

Below us were the Rhine river, the autobahn, and many beautiful and historical buildings of Cologne:

At first, we had seen the Cologne cathedral right before our eyes after the sightseeing train had stopped in the city. Now, we saw the cathedral below us from the gondola:

From high above, we saw the beautiful Claudius Therme, a thermal swimming pool with water as hot as 33-37 degrees Celsius (91.4-98.6 degrees Fahrenheit) that we have to visit some day. Its water has flowed through limestone and dolomite rock for 39,000 years, is carbonated and mineralized, and has healing effects on circulation, joints, and heart.

After our gondola trip, we walked back to the zoo and from there to the parking garage and drove home. I had one very tired but satisfied boy 🙂 The snake slept in our bed with us that night.

This concludes our excursion to Cologne this time. And if you enjoyed Lyons Cub’s trip to the Cologne Zoo, also check out his visits to the Duisburg Zoo and the Wuppertal Zoo!