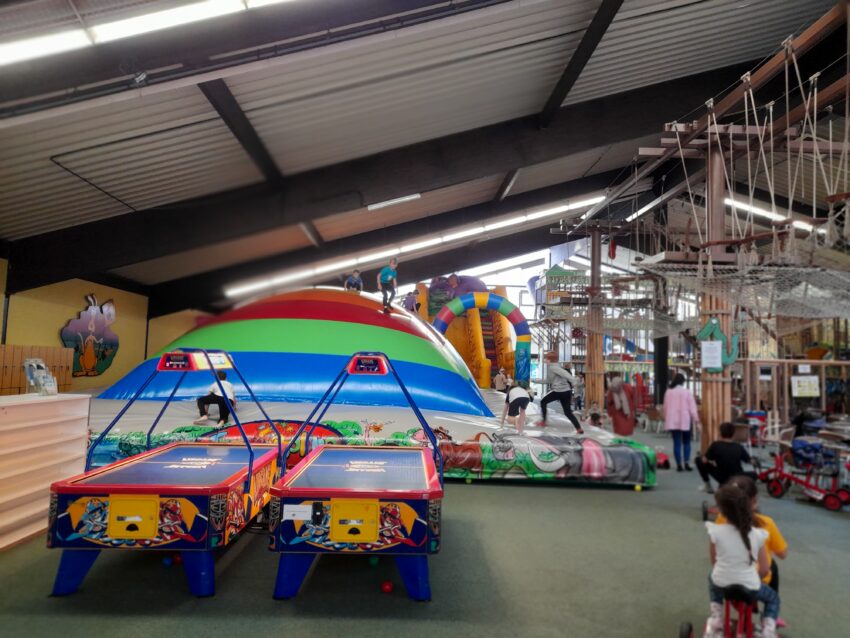 Lyons Cub has found his favorite indoor playground! Having tried out GeckoFun in Burscheid, Hoplop in Cologne, and Oki Doki in Langenfeld, we went to Trampolino in the city of Hilden, and this place had something of everything and some additional attractions the other places lacked. Let’s see how those four indoor playgrounds compare.

And here’s to the sizes of the indoor playgrounds:

This is what it’s like at Trampolino in Hilden:

As a parent, I have to say the Hoplop, which had the most climbing attractions, was so big that you completely lost your kids out of your eyes. It was a bit fueling my anxiety that Lyons Cub could get hurt, lost, or walk out with another family. Also, we were there in the middle of summer with over 30 degrees Celcius, so it was terribly hot and stuffy in there, and just sitting on a bench was exhausting and causing you to sweat. However, there were separate beautiful, rooms for birthday parties, not just a reserved bench in the general hall.

GeckoFun, on the contrary, was small and had the nicest seating area for parents and for birthday celebrations. You constantly had the kids before your eyes and knew they couldn’t walk out without passing your seating area. It had no attractions for older kids and teens, though.

Oki Doki was really small, but the benches were arranged in such a way that you did not have a good view of your children. It had the high rope course for older kids and teens, and an easier one for the little kids of 1.00m+ of height.

Trampolino, however, had the nicest accommodation for parents and grandparents ever: Besides the usual seating area for the adults and for celebrating birthdays, which was very central and offered a good view over all the attractions, it had a real restaurant with delicious food, not just fast food. The best thing was that you didn’t hear the screaming and crying of the children there! At all the other places, it is okay when you arrive at opening hour, 10 a.m., but around 2 p.m., the noise level gets such that you have to scream to understand what the other person says. Although the high ropes course was just for older kids of over 1.30m of height, my son didn’t mind and made good use of the attractions he was allowed to use.

The only negative thing about Trampolino: The kids were free to ride trikes of different sizes around the whole floor without supervision, causing several (harmless) crashes. Usually, the parents jumped in before something worse could happen.

Of all four indoor playgrounds we have visited so far, Lyons Cub liked Trampolino the most.

The trampolines were great fun; even the parents ventured onto them.

Some kids were evidently more advanced and could even do flips. Lyons Cub watched them in amazement. He even threw himself onto the trampolines, yelling: “Mommy, mommy, did you see that?!?”

My son loves bungy jumping; he did it at the fall festival last week, at the fun fair in Monheim last year, and in the Clarksville Governnors’ Mall on the Jumping Spider three years ago. The bungy jumping place was always well supervised. The personnel helped the children into their harnesses and adjusted the height of the straps. Alas, one has to stand in line for bungy jumping, so it’s best to do it in the morning, when fewer kids are there. That’s what we did. It costs EUR2.50 to jump each time (about 5 minutes, I estimate). One has to buy special tickets at the counter for that (pink ticket). The go-karts cost another ticket (green ticket). Of course, it’s not nice to pay for the attractions inside when one has already paid an entrance fee, but they have to pay the supervision personnel, so I completely understand that. They are disposable paper tickets that get used only one time (not good for the environment, but healthier during the pandemic than laminated tickets that move from hand to hand).

The bungy jumping place was not for the adults, by the way. Too bad!!

There were fewer climbing towers at Hoplop or Oki Doki, but they were sufficient for my nearly 5-year-old. Underneath them was the scooter race track. There was only one yellow long plastic slide and a blue, curvy one down into the ball pit; not quite comparable to the other indoor playgrounds, but sufficient.

There were two foosball tables, and they were the best of the tables at the four indoor playgrounds we’ve been to, because when you threw EUR1.00 into the slot, a bouncy ball came up, and you played soccer with it, and when it fell into a goal, the person who shot the goal got the bouncy ball that fell out! Lyons Cub got 7 (!!) bouncy balls. He played against mommy and another boy.

One of the main attractions was the yellow inflatable slide. It looked really dirty and worn out and had a yellow rubber cloth as cover that always flew up when kids came sliding down. That’s the only attraction that should be replaced in there. It was still fun for the kids, but a bit unsafe since some little children climbed up the slide where the others came down, which was not permitted, but nobody hindered them.

The most interesting thing by far was the “Luftburg,” or air castle. However, it was very difficult for little kids to climb up on it. They all had to wear socks, so we had brought those anti-slide socks with sticky rubber pads. Still, my son always slid back down, so I had to lift him up to reach the handles to pull himself to the top. Once, he came back down and knocked me over, and we both landed on our bottoms. But finally, we managed to get him up there, and he jumped together with the bigger kids.

Go-karts are a must at every indoor playground, I guess. Alas, Lyons Cub got the white scooter, which was the slowest of them all! Oh well. He did manage to overtake a few of his rivals. This place was well supervised, and only five kids were allowed to ride at the same time after having paid a ticket. Then, they had to leave and let other kids go, so a child with a handful of tickets couldn’t ride forever. The same rule applied for the bungy jumping place, and this was really good. At all the other indoor playgrounds we’ve been to, some kids had several coins or tokens, and just kept riding and riding, while others never got a chance.

Of course, Lyons Cub also tried some of the different kinds of trikes that dashed around the place. This one was hand propelled:

All in all, Lyons Cub had a terrific time. He didn’t like the very spicy chicken wings mommy ordered in the restaurant (because she mixed them up with “chicken nuggets,” haha), so he only ate the French fries and ice-cream. He did enjoy his colorful slushy: