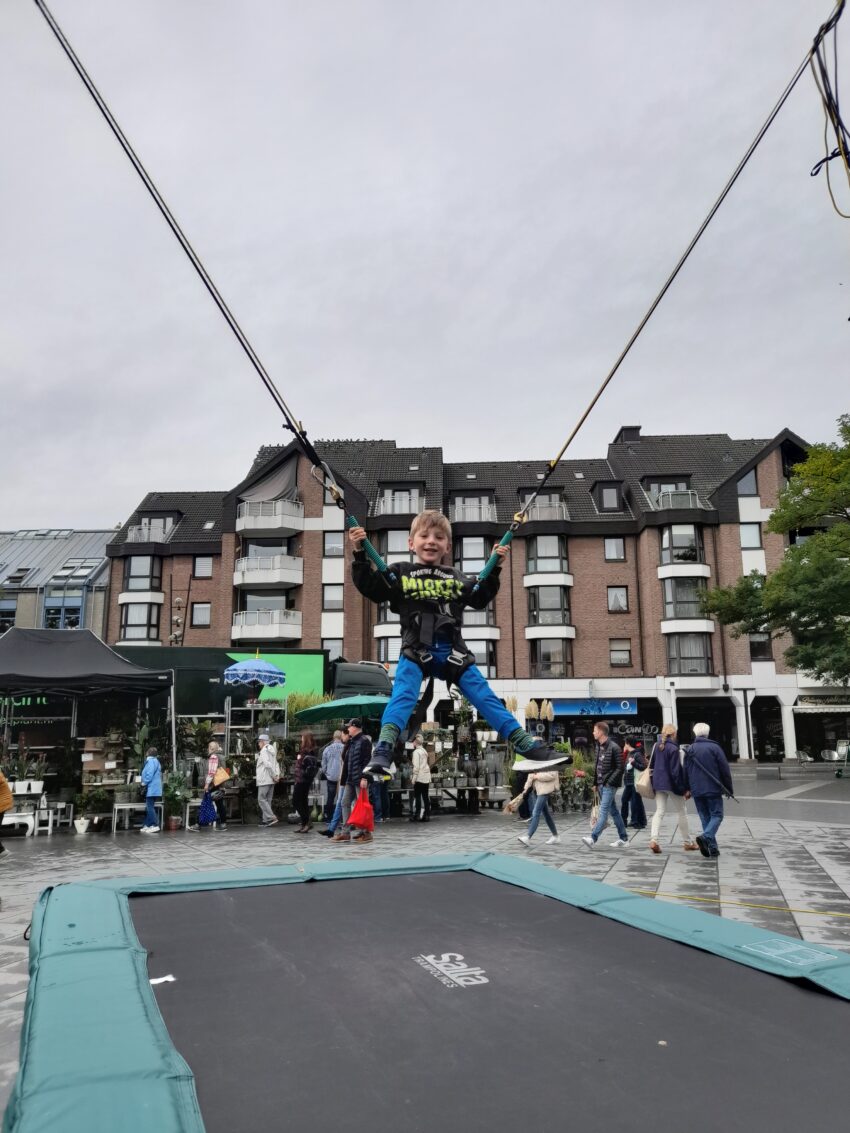 We were at Duisburg Zoo yesterday, when the sun was shining, so today, when it was rainy and cool, we JUST wanted to go to the post office in town, but we happened upon the fall festival… And here it goes. Lyons Cub went bungy jumping (which he already enjoyed as a toddler), fishing for plastic duckies, riding on a merry-go-round, and playing a toy trumpet. He had popcorn and love beads (that came out of his plastic trumpet), and over all, he had a fun surprise day. Sometimes, things don’t go as planned 😉

Before we tried out the attractions, we bought popcorn and a toy trumpet filled with love beads, which Lyons Cub mostly spilled just to play with the trumpet.

The Jumping Spider was the first attraction we saw on the market place in the city center. It cost EUR 5.00 for a few minutes of jumping, so Lyons Cub went just one time, to save up for some other attractions. It was fun, although it was “spitting,” and there weren’t very many kids due to it being in the morning and the bad weather, so we didn’t need to stand in line. Two girls were jumping at the same time as he and imitating him when he shouted, “I am flying!!!”

Then, Lyons Cub spotted a booth where little kids could fish plastic duckies out of a water trough. They had numbers written at the bottom if they were winners, and the attendant counted them and offered certain prizes. My son won a prize and picked out a green slimy thing with plastic fishies in it, like a squeeze ball.

After that, we bought six darts at the same booth, and he stood on the counter and managed to pop three balloons with his darts. He won another prize and picked a slimy, red hand which you could throw around on a long, retractable slime line, and which stuck to things like the floor and the wall. We would later try it out in Grandma’s apartment 😉

We also bought Grandma’s Christmas present: There was a hand-blown glass artist at his booth, and he sold us a pink, shiny angel for Grandma’s nativity scene. It can hold a tealight. Then, Lyons Cub wanted to go on the merry-go-round, and he picked a green and pink dino as his ride:

Then, Lyons Cub wanted a bouncy ball out of a vending machine, but alas, instead rolling down in a spiral after he had thrown in his EUR 1.00 coin, nothing came out!! He was very disappointed. A man standing nearby told me to speak to the attendant working the merry-go-round, since it was his machine. The young guy really came, rattled the machine, and the orange bouncy ball finally rolled down and onto the pavement!! Lyons Cub was delighted.

Well, so much about our unintentional visit to the fall festival 😉 Afterwards, we went to Grandma for lunch, and my son tried out his retractable slime hand, which worked really well on her walls….