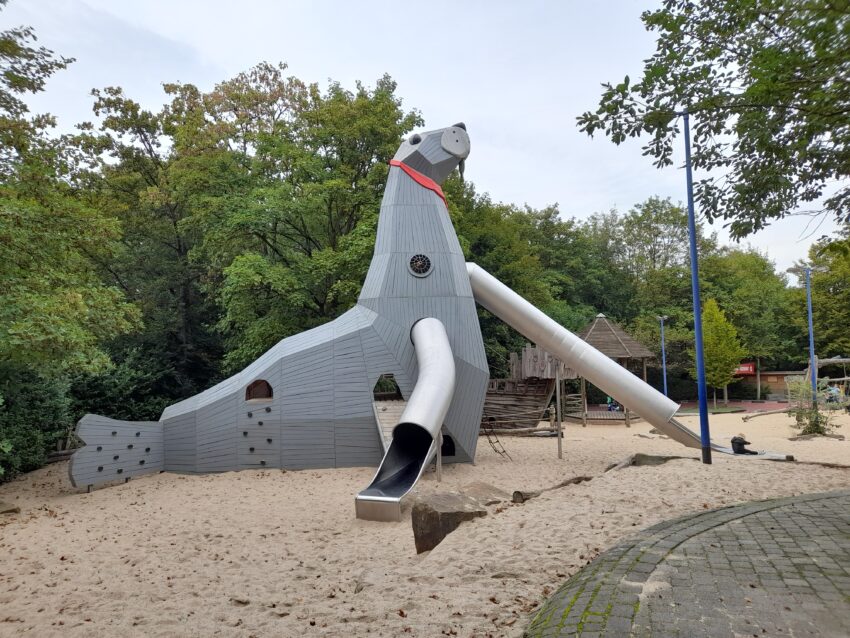 This was Lyons Cub’s third zoo visit today! The first one was Nashville Zoo in 2019, and the second one was 2021, when we went with grandma to the Wuppertal Zoo. Alas, it was very hilly there and not easy to navigate with a senior and a stroller. It was quite exhausting, although the variety of animals was amazing. Today, in Duisburg Zoo, we walked on straight ground, the ways were nicely short, and it was easy enough to see almost everything in about three hours. And, as a bonus for my son, we went by train this time!

We arrived with Deutsche Bahn at Duisburg central station around 1 p.m. and took a traxi to the zoo from there on, because this mommy could not find the correct tram that went there. The train trip was about one hour, and Lyons Cub did really well (despite asking, “Are we there yet???” about a hundred times). At least, he managed to sit relatively quiet on his seat, without running around. This means we will take more train trips in the future! Especially if the German government institutes something similar to the EUR 9.00 ticket again 😉 We finally arrived at the entrance of Duisburg Zoo. It was not too busy yet; the weather was fine, the last dry day for a while now, since we’re expecting cold and rain. Alas, the famous dolphinarium was closed, because the dolphins had young.

Next to the entrance is the zoo shop, which Lyons Cub spotted immediately! I promised him he could pick out a “little animal” on our way back. We proceeded to the entrance (we had purchased our tickets online already; it was EUR 11.00 for kids aged 3-17 and EUR 19.50 for adults). Shortly behind the entrance is a strange metal figure of a hilarious man with a funny-looking bird on his head. People rub his hands, which is why they are so shiny. You’re probably aware of the statue rubbing cult — well, there’s quite a bit of that in Germany! We did that, too, of course.

The first animals we saw were the lemurs. They had a pretty outdoor garden with climbing structures, and a nice indoor place.

Then, we walked over to the giraffes. Lyons Cub couldn’t be less interested in them, although they fed from their hay attached to feeding stations on high poles.

There were two huge, black southern ground hornbills in the giraffe enclosure that caught our attention:

Afterwards, we saw the elephants. One of them had two metal rings on his tusks. Were they for protection? Had they broken off? We didn’t know, but we watched him eating.

Then, we walked into the aquarium. Lyons Cub has been to aquariums before, like in Nashville, TN and SeaLife in Oberhausen. This one here was small compared to the one in Oberhausen, but it was exciting for kids, anyway. One tank was being cleaned right at the moment when we arrived, so Lyons Cub got to watch a guy in a diving suit “vacuum” the tank floor. This is also why the fish were right in front of his nose; they fled the cleaning personnel.

The big, fat manatees were amazing and looked like submarines. One was called “Rückenschwimmer” (backstroker), and it really swam on its back the whole time!

There was a wooden staircase one could ascend to a platform from which one had a nice view over the tanks and the turtle enclosure:

Every zoo has a playground for the littles, I guess…. Well, Lyons Cub ran towards it as soon as he spotted the blue safari climbing truck! It was steep, so the kids slide inside. It kept him busy for quite a while. There were also some play things and a swing around it.

In contrast to the lynx at the park in Solingen, who hardly ever appears, the one at Duisburg Zoo seemed totally unafraid and walked close to us past the glass window many times.

The tapir with its funny nose lay lazily in his den and wouldn’t venture out. Too bad!

Mommy was getting hungry (sonny boy had snacked in his stroller already, but he was still able to enjoy some French fries and a green Yoda ice-cream), so we walked past the wallabies and chickens to sit down in a friendly outdoor restaurant.

A highlight are always the meerkats! We already saw the meerkats in Fauna Park in Solingen, but these here were so friendly, and one came near my son and really interacted with him!

Very pompous and proud, huge Ankole bulls with their ginormous horns rested on a meadow. We had never seen those before. Impressive!

Then, we went to the stables, some of which we could enter — but all the animals were outside. They had just received their food, so the donkeys were eating out of their metal dishes. There was one pig (a Kunekune) with a really strange nose, turned upwards.

12. Rabbits, a Tunnel, and Turkeys

A big adventure for Lyons Cub was to walk through the tunnel underneath the rabbit enclosure, where you could see the bunny burrows from below. Next to their area were the turkeys. No worries, they are safe here, as Germans don’t celebrate Thanksgiving!!

A cool attraction for bigger kids was a wooden tower they could climb to have a great view of the donkeys, pigs, goats, and bunnies from above.

14. The Farm House with Taxidermy Items

A bit gruesome were our finds in a replica of an ancient farm house: There were taxidermy artifacts, such as an owl, a penguin, and another bird of prey, and strange preserved critters in alcohol jars. One could look through magnifying glasses to see fleas. There was a nice platform that offered a great view of a part of Duisburg with its autobahn and a wind turbine in the distance. Typical daily items from the farm life generations ago were displayed.

Inside the farm house was a section for canaries. They flew very closely over our heads, and there was chirping everywhere. It reminded me of an aviary in Honolulu, Hawaii, where David and I had spent our honeymoon, and where we held food sticks, so that the canaries perched on our hands. These here were more shy, and we couldn’t feed them.

After watching the birdies, my son spotted another, much bigger playground in the distance and sped towards it….

Lyons Cub was about ready for his next playground. Indeed, this one is worth visiting the zoo for already!! It had a huge, wooden pirate ship and an amazing, high seal with slides down, almost as cool as the slides in Irrland amusement park. We stayed there for about an hour.

If you look closely at the round window in the wooden seal, you see Lyons Cub peeking out of it 😉

The pirate ship was very elaborate, even its inside with its cannons, ladders, and trap doors.

There were go-karts, too, and they cost EUR 1.00 to rent. Lyons Cub drove all by himself, without my help! He was being chased around by three police cars 😉

The swing and the other climbing constructions were fun, too.

We didn’t spend much time at those enclosures but walked past and admired the animals from afar. They didn’t want to be bothered; the camels lay around chewing the whole day, whenever we came past them. What a lazy life 😉

There were two seals lying in the background and scratching themselves. We didn’t see them swimming, which was a bit disappointing. If we had arrived sooner, we could have observed the feeding of many animals, which was at 2 p.m. We’ll keep that in mind for our next visit.

Everyone loves cute koala bears!!! Alas, they were all hanging snugly in their trees, sleeping.

Oh well. At least, my son got to sit on a bear statue!! The lions were not outside, and their house was closed. Maybe some other day.

Our last step was the museum shop, where Lyons Cub bought a little “dinosaur egg” out of which a baby dinosaur hatches when you put it into cold water for 24 hours. We’re going to do that tomorrow….

We took a taxi back to Duisburg central station, where we enjoyed dinner at McDonald’s before we took the train back home. We also let some model trains run, which is fun every time, even for adults. I remember I used to do this as a student at Duesseldorf central station.

My son fell asleep during the whole ride 😉 I transferred him into the stroller when we had to get out, pushed him home, carried him in the stroller upstairs, and put him to bed. Never slept so well 🙂