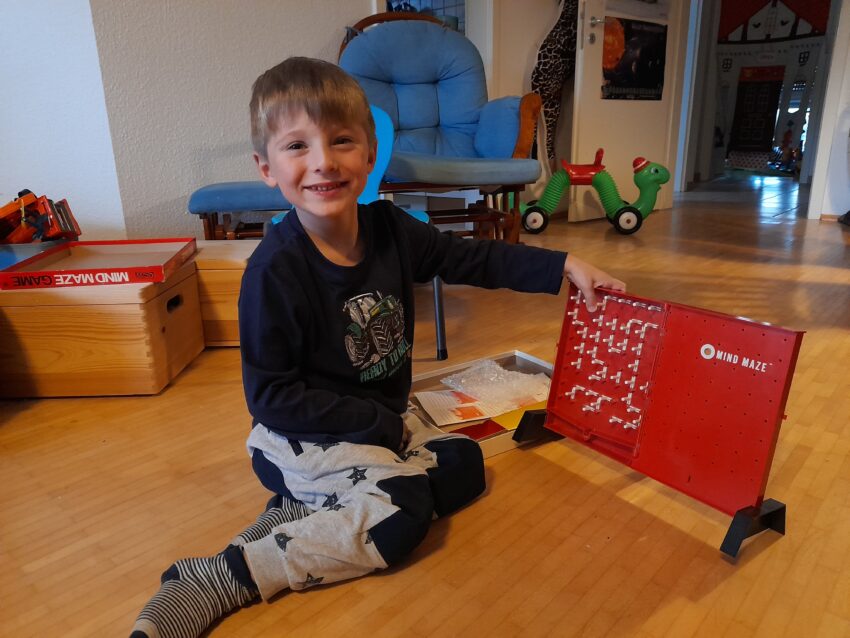 Today, we are reviewing an old Parker Brothers game from the 1970s. It’s called Mind Maze, and I bought it for my husband David from an online antiques seller some time around 2015 or so. It says it’s for 8 years and upward, but I played it with my 4-year-old son. It worked a couple of times, but there’s a nice way to make it easier for little kids: By looking! This is how the game works:

Mind Maze is a magnet-based game for two persons. You have to build a maze with little white pegs on a platform that has two sets, one on either side, to make a labyrinth. Each player has his own set facing him, so the other person cannot see where the pegs are being placed. One constructs a maze with at least one path that leads to the goal, a little hole at the top of the playing field through which the opponent can pull the magnetic ball he is trying to maneuver through the maze with the help of a magnet he holds. Of course, one also builds several fake paths that end in a wall.

When you play this game the correct way, you have to steer your magnetic ball unseen through the maze of your opponent by guessing the right path to the hole, and when you make a mistake by hitting a peg on a dead-end path, the ball drops and you have to start all over again, but you will have remembered not to go this way. We adapted this game so a 4-year-old could play it. First, we played by looking at the labyrinth, so Lyons Cub could see which way to go to the hole and pull his ball out. It was still difficult for a youngster, because the ball drops easily and it requires some dexterity to move it up and sideways.

We played two rounds with grandma, who found it quite challenging for a little kid. Mommy managed once without looking, but only because grandma coached her by saying “left, right, up, down.” Lyons Cub managed a few times with looking, and then one time without looking, just with coaching!

There were two things I didn’t like about that game (which, admittedly, is older than I am and smelled like dusty attic): 1. You had to tilt the plastic board so the opponent could make his first contact with the ball; otherwise, it would not stick to his magnet. Once it stuck to his magnet, one could stop tilting the board. 2. The doors didn’t close, so one person always had to hold them shut while the other one was playing (that’s maybe because the game was old already).

All in all, it’s quite a cool, old game without digitalization that strengthens several skills, such as hand-eye coordination, dexterity, and memory (as well as direction-giving to your opponent). My son knows what “right” and “left” mean, but since the opponent sees it in a mirrored way, his “right” meant “left” to the other player. You can play this game in different ways by notching it up a step every time: a) with looking, b) without looking, but with coaching, and c) without looking. Constructing the maze was probably the most interesting thing about this game for a preschooler. First, he put his pegs just horizontally. Then, he figured out how to create a real path by adding vertical pegs. After about seven times, my son wanted to play something else.