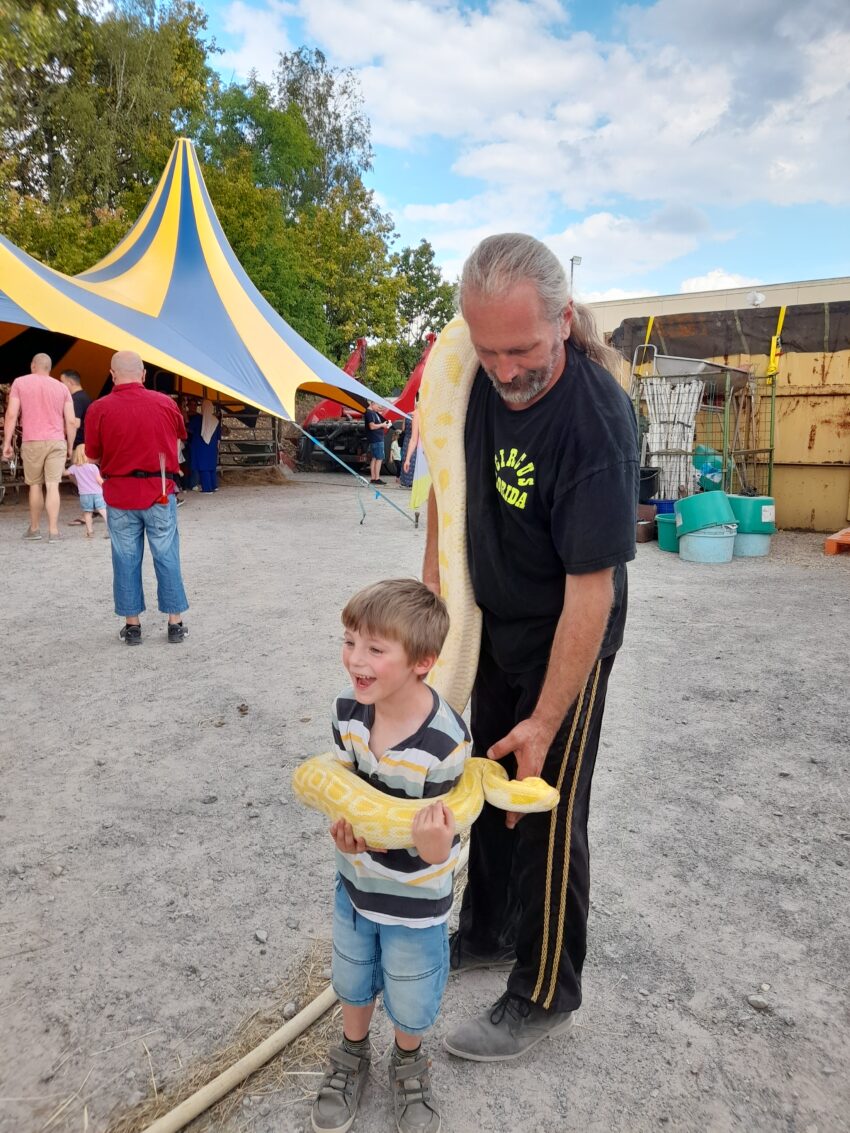 Today, Lyons Cub proved his bravery — he held an albino king python for the first time in his life!!! Given that his mommy used to be a vendor at reptile shows as LZRDGRL in Wheaton/Chicago, Indianapolis, Sheperdsville, and the Memphis Repcticon from 2010-2014, he totally steps into her shoes, heehee… This was his third circus visit, and I have to say it was the perfect middle: The first time, he went to Circus Liberty, which had lots of animals and pony riding, but no fire act; the second time, he went to Project Circus Proscho, which had acrobats only and lots of scary fire stunts. This time, there was an abundance of animals that the children could feed during the break, plus acrobats, plus pony and donkey riding at the end, plus a little fire act. It was Circus Florida‘s first show in our city, and it did not disappoint. It offered something for every taste!

The tent was packed, and it was really hot inside. Alas, this mommy made the mistake of buying Lyons Cub a glow sword that played music. From now on, I had a neon sword in my view during the whole show! However, when the horses and camels walked close to the seats, I asked my son to take it down and switch it off, so he wouldn’t scare the animals, and he complied readily. He had an awesome seat right in the center of the front row! I sat right behind him. His friend Giulianna and her Daddy came to the show, too. We didn’t see them, because it was so dark, but we met up during the break.

At the start of the show, the circus director explained that the audience was welcome to take photos and videos and share them on social media. The first act we witnessed were the big, black horses who performed their dances and ran around gracefully in the arena. One of them lost its pink feathers right in front of us!

After the big horses, we saw an elegant high rope artist, Adriana, who performed the breath-taking “death spiral”:

After the high rope acrobat, we laughed with Rudi the Clown, who made the audience clap and cheer for him before he blessed us with his presence. If we didn’t produce enough noise, he did not come out from behind the red curtain. In his first act, he didn’t actually perform anything; he just walked back in and out, making the children yell and clap and stomp just the right way 😉 The second act from Rudi the Clown was one we had already seen at Circus Liberty, where it was performed by Clown Emma: The clown tries to hide an apple from the circus director; at first, under his armpit, but it falls out; then, between his legs, but it falls out when moving, too; then, he eats the apple. Only this time, the clown spat out apples pieces into the face of the director!!! The kids liked that a lot and laughed. I found it gross, and the ponies that came later had their noses in the sand and were probably trying to eat the pieces 😉

When Rudi the Clown had finished his joke, it was time for the Hula Hoop girls to show off their skills.

Following the Hula artists came a bunch of tiny, black ponies, one of which Lyons Cub got to ride at the end of the show. My son was a bit disappointed that the ponies didn’t stop right in front of him to put their hooves on the pedestal and look into the audience; they were to his left and right, but never came to us. Oh well! He got to feed them during the break later, which totally made up for that.

After the ponies, we saw the last act before the break: A roll acrobat! He managed to stack five boards on top of one another, the lowest one being placed upon a roll, without falling. He performed the astonishing act of climbing through two silver rings while standing on top of the stacked boards. Amazeballs!!

The last act consisted in two snakes being carried around through the audience: Punta, a yellow albino royal python, and Kaa, a brown ball python. The director announced that one could hang the snakes around one’s neck and take a family picture during the break, and my son got very excited and absolutely wanted to hold a python. So out we went…

When I asked Lyons Cub what it was like to hold a snake, he said: “It was heavy!!! And it had its face close to my face.” 🙂

During the break, we met up with Giulianna and her Dad to go feed the animals. For EUR 2.00, one received a little goodies bag with pellet food, and Lyons Cub ran to the ponies first to feed them. His girlfriend was a bit too scared to feed them, but my son just wiped the spit off his hands and was not shy around the animals at all. He fed the horses, ponies, donkeys, and alpacas first.

In addition to the show animals, there were also those that did not participate in the circus, such as dogs, chickens, a bunny (if that wasn’t indeed a wild one), and kangaroos (including a beautiful albino with red eyes). We had never seen one before!

The funniest part of Circus Florida (and what this mommy liked most) was the act with the construction worker and the beautiful lady. There was a pretty girl in a cocktail dress sitting at a bus stop, and a construction worker fell in love with her and wanted to impress her (he was a juggling and balancing artist). Thus, he lifted several chairs and balanced them on his chin, as well as a hammer and a fence. However, the girl was never impressed and didn’t even look at him! He even balanced the whole, heavy wheel barrow on his chin. When nothing showed any effect on the girl, he finally shrugged his shoulders and left, defeated. And then, we saw the girl walking out with a cane — she was blind!!!

It possibly couldn’t get any better than that… However, then, we saw another high rope artist, and she was pretty spectacular performing acrobatics on a ring, too:

After that followed the camel act. One of the camels had a very crooked hump, which looked funny. You can see it in the pictures below. Also, the light created psychedelic patterns on its fur 😉

The next act was a single dappled pony that was really little, and it wore a plush monkey on its back. It danced to the music and walked on its hind legs for a really long time. Great job, tiny one!!!

The gray pony was followed by the goat act. The goats walked over a high ramp, turned around, and even jumped on it and walked backwards.

The final act was the fire stunt. The fire breather was the circus director, and just one guy performed. This was totally enough; in Circus Proscho, there were three guys “breathing” and “swallowing” fire, and that was almost too much, because it got really hot in the tent and was a bit frightening to the very little kids. But this one fire artist was great to excite the bigger kids and didn’t last as long as to scare the toddlers.

After having clapped for all the artists at the final curtain call, Leander stayed behind to ride on a donkey and then on a pony, while his friend Giulianna waited for him.

When I asked Lyons Cub what the difference was between riding a horse and riding a donkey, he said: “The big ears!!!”

And this concludes this Sunday’s circus adventure for Lyons Cub. He made a few experiences he will talk about for a while.

Alas, while we sat in our circus tent, we saw a message on our cell phones that next to another circus in the nearby city of Duisburg, a light plane had crashed 50 meters in front of the tent, killing both people on board and burning ten cars on the parking lot. There had been two small planes circling above our heads while we fed the animals during the break, too. It was such a lovely, sunny day for flying. (I helped my friend John Williams from Carbondale build an Aeronca from 2010-14, and although he often offered to take me up, I always refused. But I still love experimental planes.) The other people were extremely lucky that their tent wasn’t hit. And this just goes to show that we shouldn’t take life for granted, not even on a nice circus adventure with our kids, where we think nothing can happen.