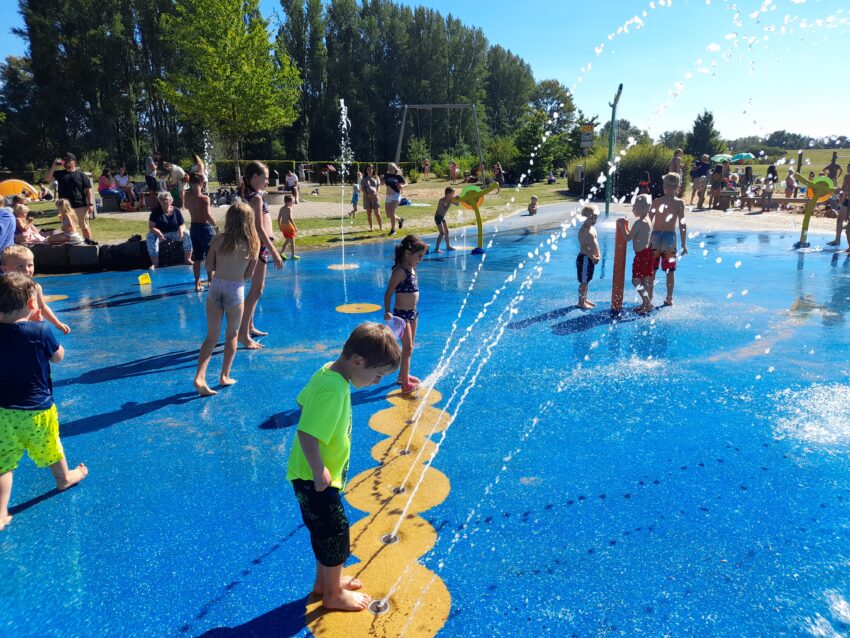 On a hot summer day, pack your kids and go to a splash pad for a little refreshment… That’s what we did, and what’s more, Lyons Cub met his friend Giulianna and her daddy there. The kids had fun playing in the sand, climbing and sliding on the playground, and my son was the most daring, getting wet on the splash pad. It sports a little brook where kids can walk on smooth rocks, and the pad itself has two yellow water guns for fun fights, as well as lots of different sprinklers and fountains that come on and off surprisingly.

The yellow water guns could be rotated and aimed at the people you wanted to soak. Luckily, this mommy had several sets of clothes for a quick change in her backpack, because one boy sneaked up on Lyons Cub and poured a little bucket of water over his head. “NEVER do this again!!!” my son shouted. Anyways, even if he was right that this hadn’t been a nice thing to do, a water pad is there to get wet, and getting wet he did…

There were plenty occasions to dry off again, for example in the hot sand of the playground. Lyons Cub took part in a cool game the other kids played: They carried water buckets from the pad to the tower and poured it down the slide, together with sand, which made them slide down the long, silver slide even faster. Of course, they all had a dirty butt!

When it got too hot in the sun, we went to the ice-cream van:

Then, we took a ride on the go-karts to the famous tree swing of Landschaftspark Rheinbogen:

The sky was the limit!! It was so nice to drive along the paths through the fields and trees, close to the Rhine River behind the tree line. Also, they had hung up a new swing, one that was less scary for the kids because it was smaller and not as high, a tire swing: Of course, Lyons Cub tried it out immediately!

Since it was so hot, the kids got a second ice-cream from a kiosk (and the parents and grandma, too!).

Before we went home, Lyons Cub was allowed to climb a big tower with a slide on a second playground right in front of the park. Then, we had to go back into the hot car. But compared to in the 1980s, we do have a/c now… wish I had been so lucky in past summers!

2 thoughts on “… Play on the Splash Pad in the Landschaftspark in Monheim?”