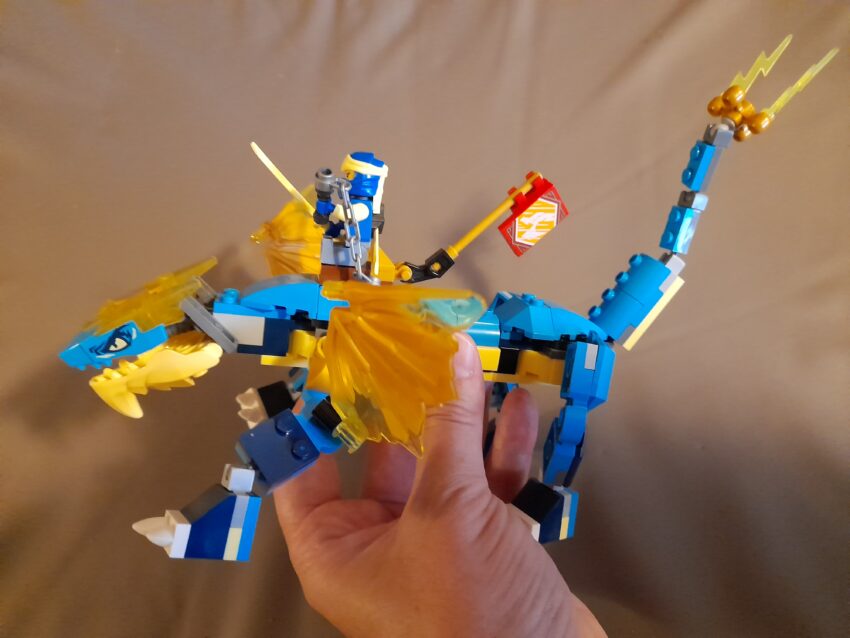 When we went to shop for groceries at ALDI’s, we saw a cool LEGO Ninjago robot (Zane’s power-up Mechc EVO), and I got it for my son. I must say it’s quite a nice design for so few bricks. The face, flag, and breastplate are very intricate and delicate. The arms, legs, hands, and feet are movable.

You can open the breastplate of the white robot and exchange the figurine riding in it. The white ninja fighter comes with a white turban and with gray hair, respectively. His weapons are a blue sword and an ice-blue rotating blade. Lyons Cub liked it so much that I ordered a discounted LEGO Ninjago Jay’s Thunder Dragon as a companion for it. On the package, it says 6+, and my son wouldn’t have been able to build it by himself yet. But when I helped him, we got the dragon done in about 30 minutes, and he has had fun playing with those two ever since.

The dragon has pretty, transparent wings on its front legs, two white claws on each foot, and two flames on its tail. Most importantly, it can open its mouth wide. Its legs and tail are movable. The weapons of the blue ninja fighter, who sits on a seat on the back of the Thunder Dragon, are two yellow swords (one of which can be worn on his back) and a chain.

The coolest thing, however, is the snake figure, a creepy orange guy with a snake head in an elaborate uniform with four knives on his back. The white robot also came with a snake figure, and that one has a little gun that can shoot two orange pellets right across the room. We lost one already somewhere on Grandma’s colorful carpet, so we’re keeping the second piece of ammunition in a safe place 😉 Luckily, the tiny gun came with two bullets and two triggers. I guess the makers knew they would get lost instantly. The propelling force is amazing for that size, though!

I’m keeping the instruction manuals so we can rebuild those two if they get “hurt” in fighting 😉 Those things are cool to build and play with. I think I started something here…. If you have a young ninja fan in your family, consider those entry-level ninja toys — Christmas is coming in a few months!