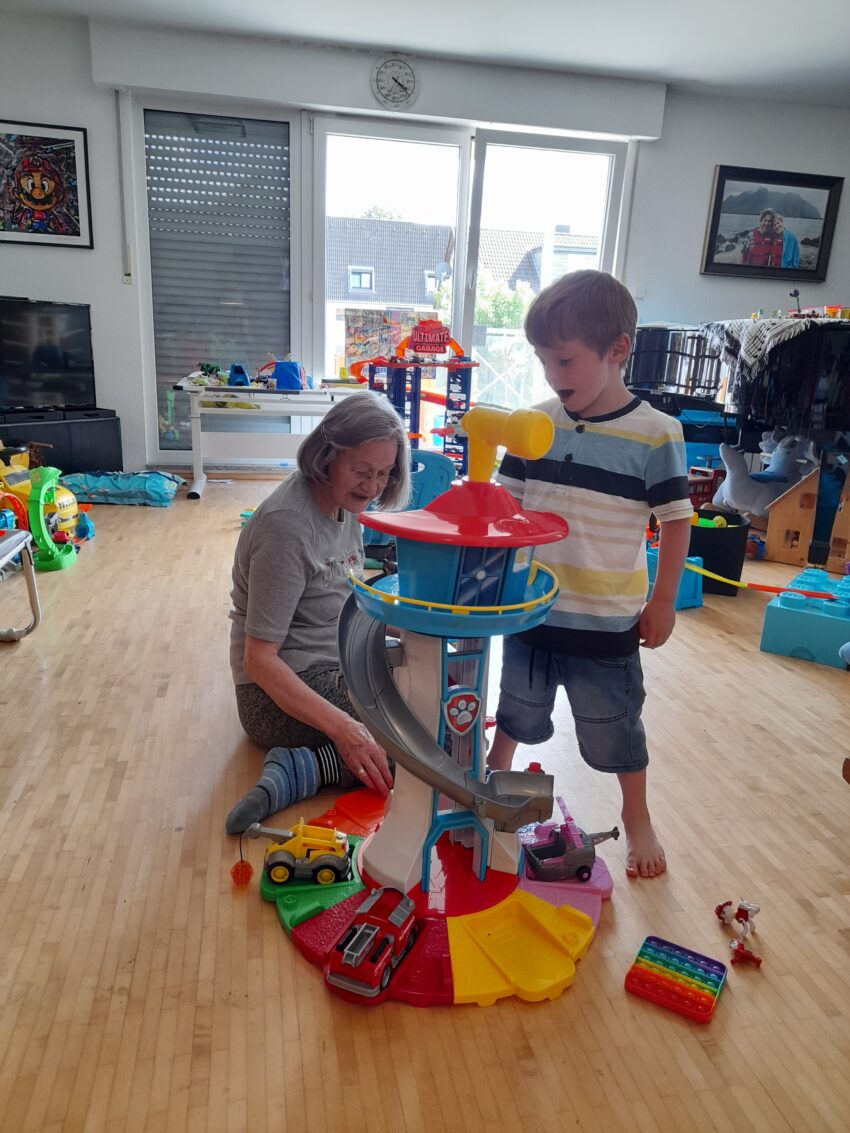 OMG, Lyons Cub is dry!!! Even at night. It took 4.5 years — well, he had been almost dry when he started his Montessori kindergarten in Clarksville, TN at 18 months, because this was the condition to be accepted there. He even had a “potty watch” that played a melody every hour to remind him to go potty at home. However, after our move to Europe when he was 2.5 years old, he had a setback, since nobody at his new kindergarten cared about taking him to the toilet every hour; the teachers just put him in diapers and said, “he’ll say when he’s ready.” Of course, he found it very convenient and didn’t say anything, although he knew how to use a toilet and used it at home (with a little plastic ladder and kiddie seat).

Now that he finally made it, he received the present that had been waiting for him in the broom closet for two years: The Paw Patrol Lookout Tower!!!

Thank goodness, he still liked it, although he’s a big boy now 😉 When I bought it for him, it was taller than he, and now it’s the other way round. It has light and sound, and the most astonishing feature is that the elevator catapults the dogs that ride in it high into the air! It also sports a cabinet to put the jetpacks in (the little door closing the elevator from the backside). A cute feature is the little dog dish that shows colorful bones when the child pulls a lever. It can be emptied by pulling the lever to the other side. The telescope can turn, and different sceneries become visible on the screen. The platform at the top can hold many different little figurines, whether they belong to the set or not. The base rotates, so one can put the colored landing pad of the dog in whose vehicle the figurine on the slide is supposed to land into the correct position. Thus, you turn it to yellow, put Rubble’s digger on the pad, and let him slide down to end up in his vehicle, hopefully.

The slide actually doesn’t transport the dogs right into their vehicles (they mostly fall elsewhere, but it doesn’t matter; at the end of the slide is a button to make them launch into their cars). The tower came with Chase’s police car and Marshall’s fire-engine (which we both had already). We also have Sky’s helicopter, Rubble’s digger, and Rocky’s trash collector. The only one I never bought is Zuma’s orange boat. But there’s no limit to a kid’s fantasy — after all, Lyons Cub can use Romeo’s car, Night Ninja’s truck, or the vehicles from Cat Boy, Gecko Boy, and Owlette from PJ Masks… Just mix it!

The Lookout Tower is robust and sturdy and also withstands multiple kids handling it and letting all kinds of figurines and cars slide down. Lyons Cub already tried out his new tower with his best friend, Giulianna, and her little sister, Emilia. Several Hot Wheels cars from his Hot Wheels City Robo T-Rex Ultimate Garage made their way down the slide already. Of course, when Grandma visited, she had the honor of operating the tower, too.

When your child didn’t need diapers anymore, did you give him/her a gift? If yes, what was it? You’re welcome to share it in the comment section.