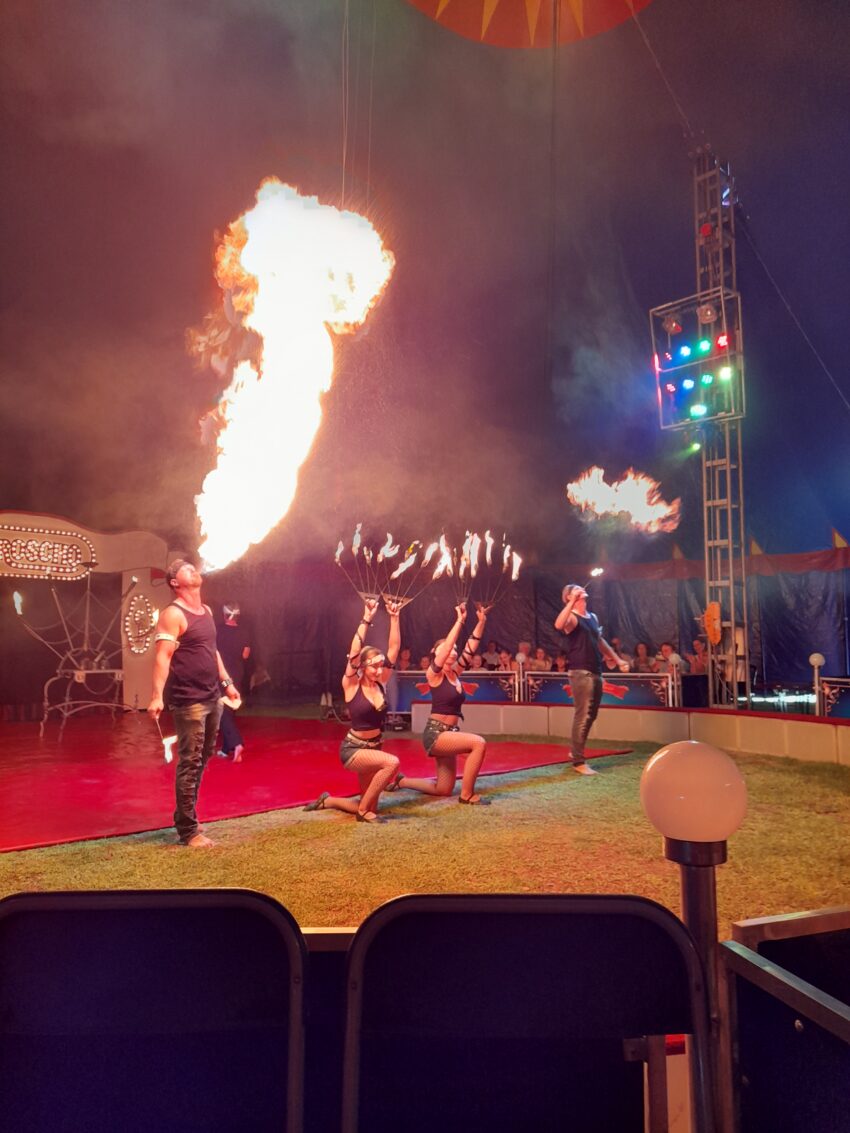 This was Lyons Cub’s second visit to a circus. The first one he ever went to was Circus Liberty, where he got to ride a horse and feed the animals during the break. He had enjoyed that very much, so when we saw the posters advertising for the “Mitmachzirkus” (participation circus) Proscho, he thought he would be allowed to interact with the acrobats and animals, too.

There were tears when we heard at the entrance that one had to be six years old and have participated in a “school project” in order to take part in the activities for children. However, he did enjoy the show after all. The kids who participated stayed behind in the tent when the official show was over, so at least, Lyons Cub didn’t have to watch them have fun in the arena.

We walked through the Langfort park with its climbing animals and exercisers to get to the place where the circus tents were set up. At the entrance, we got popcorn, cotton candy, and colorful slushies. This was his first bag of popcorn in his life, because popcorn is a serious chocking hazard for kids under four. He did really well and chewed thoroughly (and he’ll be 5 in a few months), so I think we’re over the hill here. He hasn’t had nuts yet, though.

Then, the show started. We had seats in the front; they cost more, but it was so worth it, because he could see everything. The acrobats were amazing, and they had lots of different acts. There weren’t any animals at all, though. A lady welcomed the audience, and the little kids had fun shouting, “Yeah!!!” when she asked them whether they had missed the circus. Then, a male rope dancer performed the first act. He walked, jumped, and danced on the rope, stood on his head, and rode a bike from one side to the other.

My son clapped for the male rope dancer who balanced on the rope and suddenly jumped over fire! You could hear the anticipation and excitement of the children in the audience. Even the adults whistled and shouted when he had made it safely 😉

We saw a juggler throwing neon-colored rings into the air:

Lyons Cub admired the hula hoop acrobat greatly; she twirled around lots of silver rings without dropping any. I think he wants a hula hoop ring now, too! Hooping is a great sport for getting fit and building muscle, so we might try this out soon.

The next act was a lady who climbed high up a rope, entangled herself, and was swirled around. Admirable!

There were several high-rope artists, and at some point, almost the whole circus family hung from bars and ropes altogether. There was so much fog in the air that sometimes, it was hard to see. The clowns were fun, too, and at a certain point even took a lady from the audience to participate.

Below, you can see how crowded it was getting; even the kids jumped on. The audience cheered.

A lovely act was a young girl in a wheel, looking like a doll.

The most awesome performance, however, was the fire act; it got so hot in the air that the audience was sweating! I think Lyons Cub was a bit scared at first, but he knew already that the guys didn’t really “swallow” and “breathe” the fire but had some kind of fuel in their mouths that they spat out and ignited with their torches. One even sees the three guys go to the table in the background and put something from white cups into their mouths. “Fire breathing” is a dangerous stunt and can result in burns, though. (I removed the sound on that video, so that the background song isn’t audible, because I don’t own the copyright to this music).

If you’re in Germany and have a school-aged kid who wants to experience the circus world, check out Projectcircus Proscho’s travels on Facebook; maybe they come to your area some day.