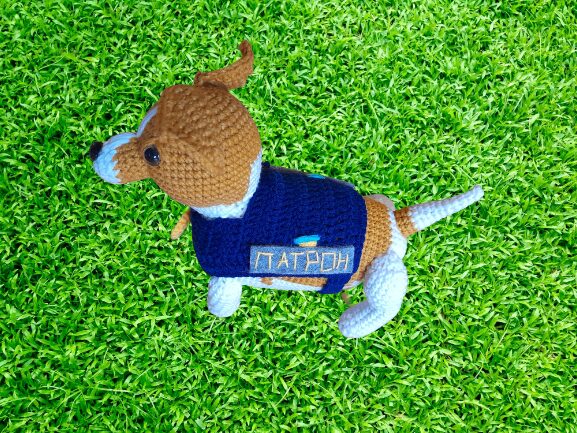 Who would have thought that a dog that detects mines has his own Wiki page, or — even better — would be awarded the Order for Courage by President Volodymyr Zelenskyy? Meet Patron (meaning, “Bullet”), a Jack Russell terrier and Ukrainian sapper dog from Chernihiv born in 2019, who belongs to Mykhailo Iliev of the Civil Protection Service. He has saved lots of lives by finding mines the Russians left behind on Ukrainian soil already.

The picture above was drawn by Sofia, who is 8 years old and in second grade. She and her Mom are now forced to live in Albania, while her Daddy is fighting as a soldier in Ukraine. According to her mother, “she is very happy when her drawings are bought. It’s so beautiful when something makes her happy and puts a smile on her face during this terrible time.” You can buy her art from her Mom’s Etsy store.

Patron received his medal at a conference on May 9th, 2022 that was also attended by Canadian Prime Minister Justin Trudeau, who had come to announce Canada’s support of Ukraine. The bomb-sniffing pint-sized pooch has already detected about 200 explosives and prevented their detonation since the start of the war on February 24th and has quickly become a canine symbol of Ukrainian patriotism.

This is what President Zelenskyy said when he awarded Patron his medal:

“I want to award those Ukrainian heroes who are already clearing our land of mines. And together with our heroes – a wonderful little sapper Patron who helps not only to neutralize explosives, but also to teach our children the necessary safety rules in areas where there is a mine threat.” (Source)

For my birthday, I received two Patron dogs, one accompanied by President Zelenskyy. These two were made by Svitlana and are sold at her Etsy shop JoyLandCrochet. Don’t they look real?

This Patron dog belongs to Lyons Cub now; he even figured out that the president can ride on him 😉

The second Patron dog knitted by Olga from MamaKlaraDolls on Etsy belongs to Lyoness! He’s very soft and cuddly, has sad googly eyes, can be lifted up on his vest, and can move his legs:

Let’s hope that the real Patron stays safe and gets to retire in peace some day. And if you want to support his fellow fighters and his beautiful country, why don’t you look up all the art that arose in his name on Etsy?