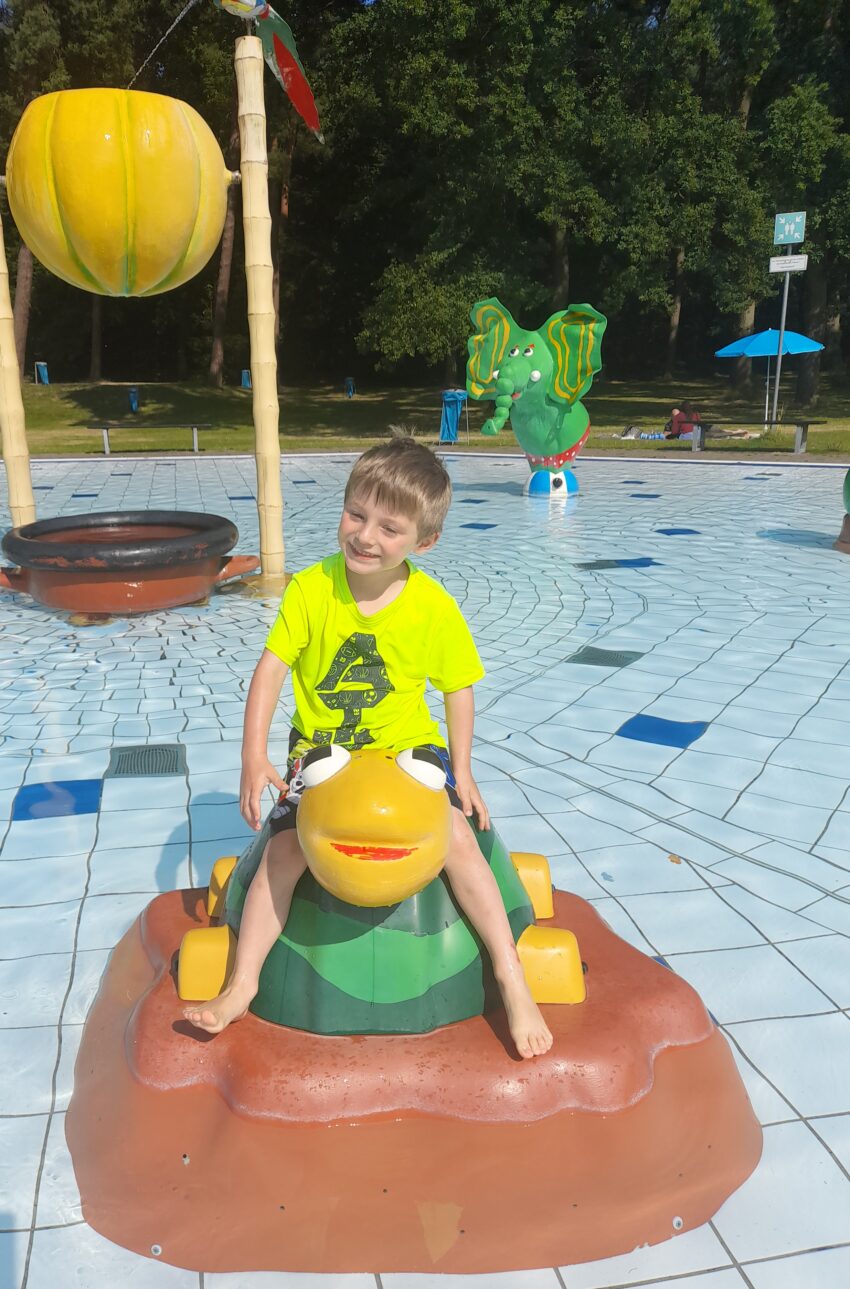 It was pure coincidence that we found Waldbad Hilden, a public swimming pool with slides in the middle of a forest. My son and I had been shopping at ALDI’s when a nice, older lady walked past us with her little dachshund. My son steered towards her, touched the leash and asked, “Can I walk your doggy?” To our surprise, the lady said, “Yes,” and handed the leash to Leander. We walked around the block through a park, and when we returned and had to say our good-byes, she told me about the forest pool in the city of Hilden. It is only 15 km by car from Dusseldorf.

Thus, the next day, we set out to explore this mysterious adventure pool. We would not be disappointed. The entrance fee was acceptable, and my son received a small bar of chocolate from the very friendly attendant. There were four big pools: One for little kids with spraying toys, one for bigger kids with three slides, one for swimmers only, and one for divers with a 10m, 8m, 5m, 3m, 2m, and 1m board to jump off.

The area is so big that it is never really crowded. We arrived around 11 a.m. and still got a parking place near a restaurant. There are hundreds of parking places in the forest. There’s a duck pond, and next to it, a fenced area was being prepared for a wedding ceremony. One walks down a little path in the woods along the duck pond to arrive at the entrance. From then on, it’s off to change clothes and lock valuables in little lockers (they won’t fit a whole backpack, but were suitable for cell phones, wallets, and car keys).

We first went into the kiddie pool. It has green elephants that spray water out of their trunks when the kids lift a lever up and down. It also sports other water-spitting animals, such as a yellow snake, a crocodile, a turtle, a frog, and — best of all – a kettle filled with water, and when you sit in it and someone else stands on a little stepping stone and moves a suspended kettle that a parrot is constantly filling with water, a shower splashes down on you!!!

Afterwards, we went down the broad, orange, wavy slide, which was a lot of fun. Then, we tried out the curvy, much higher green slide, which went quite fast. Finally, Lyons Cub tried out the baby slide in the shape of a snake. Next to this one were two whales, one with a red mouth and one with a blue one, and when you set on them and turned a lever, water fountains came out of their heads. Yay!

We did not go into the swimmers’ pool; the water was unheated due to saving gas, and it was for people who wanted to swim their lanes in peace. We walked over to the jumping pool and admired the brave ones who jumped off the boards. My son cannot swim yet, and despite he would have loved to jump, he wasn’t allowed to. We’ll wait with this until he has his “Seepferdchen,” his “sea horse medal” he will get in swimming lessons at school in a couple of years.

Of course, I googled the jumping tower and found there had been accidents in the past, e.g., when somebody jumped off the 10m board and landed on his belly. Lyons Cub and mommy just stood at the pool and watched the bigger kids jump from the 3m board. Some did a flip.

The vast area has lots of parasols and spaces to spread out one’s towels to lie down, dry off, and have lunch. There’s a little kiosk where you can get Currywurst, French fries, chicken nuggets, differently-colored slushies, ice-cream, and other snacks. Benches to sit and eat at are right in front of the kiosk. We got red and blue slushies and some food (but we had also brought our own goodie bag from home).

The only things we didn’t like so much were the wasps fighting for our food and the duck poop (which was cleaned up by attendants with water hoses some time after we had arrived). But hey, it’s an outdoor pool in a forest, so the insects and duckies want to cool off and enjoy themselves, too 😉

After all, it’s a great place to visit!