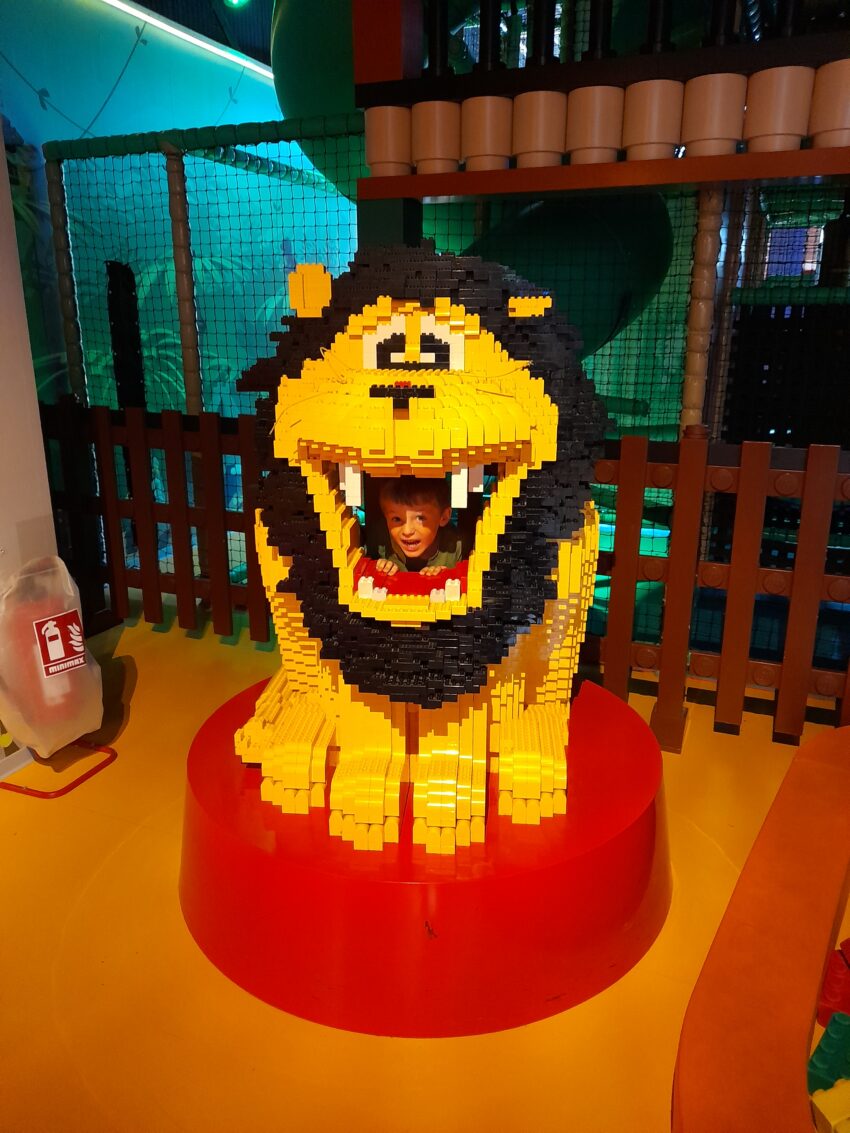 Second visit to the magical place for Lyons Cub… this time with his American friend, John. It is really possible to go to the same attraction twice and see completely different things! Last time, we went with grandma to Legoland in Oberhausen. We were busy collecting stamps and noticed we didn’t get a stamp from the pirate ship. Why? Because Leander never went inside. The stamp station is inside the ship. 😉 So this time, we made up for it.

This was going to be an eventful and also stressful excursion for Lyons Cub, because we showed his friend three attractions on ONE day: 1. Legoland, 2. Sealife, and 3. the Gasometer in the city of Oberhausen. John was in Germany for only a month, so we wanted to cram as many adventures into the weekends as possible. After all, when you visit a foreign country, you should see some of it other than the walls of your hotel room, right? It was astonishing how well my son coped with all of it. Leander had a fantastic day and fell asleep as soon as he hit the car seat — only to wake up when we had arrived at the hotel in Leverkusen, to ask to go to a playground and eat an ice-cream 🙂

After the big goldfish in the pond, we greeted the huge Lego giraffe right at the entrance:

After showing our tickets, we said hello to Lego man sitting on a bench. His shirt almost looked like John’s. We think he’s an American tourist 😉 He needs to repair that hole in his right sock, though…

Our first station was the Lego factory, and my son was overjoyed, because this time, he was the kid selected to press all the buttons to turn on the machines and conveyor belts!! He couldn’t believe his luck and asked, “I? I can press the button?” and when the tour guide affirmed, Lyons Cub performed a happy dance 🙂 At the end of the Lego making process, he received the green sample piece that been imprinted with the Legoland logo. Then, the guide went around and distributed a sample piece to all the other kids, which was very nice of him. This did not happen at our previous visit to Legoland, where the other kids were disappointed they hadn’t gotten anything.

Then, we went to see the miniature city with its soccer stadium, Cologne cathedral, gasometer, airport, port, playground, and many other features.

Our next station was the wizard merry-go-round with the Harry Potter figurines.

Lyons Cub stood at the scale and was just tall enough to be allowed on the ride. Mommy and Lyons Cub went into one gondola, and John got one all by himself. We pedaled hard to stay at the top, because if you stopped, your gondola went down.

We also rode the ghost train and tried to shoot as many spiders and monsters with our red laser guns as possible:

Before we got to the pirate ship, we stopped at a shooting stand and aimed with Lego canons at red laser dots. When we matched one, windows opened or canons fired or other animated things happened. It was cool, even for the adults! Lyons Cub and a little playmate had fun at a round table displaying a pirate island. Most bricks were glued so the children couldn’t destroy the island, but there were enough lose figures and bricks to play with on the island and in the skull cave.

The Lego pirate ship was the main attraction for Leander. It was not as big as the climbing constructions at GeckoFun, but there were canons and special lighting, and the whole shape and appearance was very appealing with a pirate flag, a life-sized pirate with a wooden leg, starfish, nets, bridges, a crab, and torches. It was not overcrowded, so it was possible to run through it with just a handful of other kids and enjoy it without bumping into crowds. It’s right next to a little café, so the parents could sit there while watching their kids climb.

Here, Lyons Cub can be seen running through the pirate ship with another boy:

On the left side right before the huge pirate ship, there is a little island for small children with a soft Lego bricks pit. There are also a Lego lion to climb inside and a cute Lego monkey, as well as a “baby slide.” I guess that’s more for kids under two years old.

Another interesting station around the corner was the Lego earthquake simulator: Kids could build a tower, house, or other construct and then switch on an earthquake in order to see how sturdy their building was. Some toppled over right away, but there was one clocktower that had been standing there for quite a while and never fell:

Lyons Cub really enjoyed the secret pathway where he had to climb under or step over laser beams like a bank robber from a movie. Inside was a super cool Lego snake, and we also saw another monkey.

And at the exit waited Einstein and Dr. Tooth — the latter to remind the kids to brush their teeth after eating so many snacks at Legoland 😉