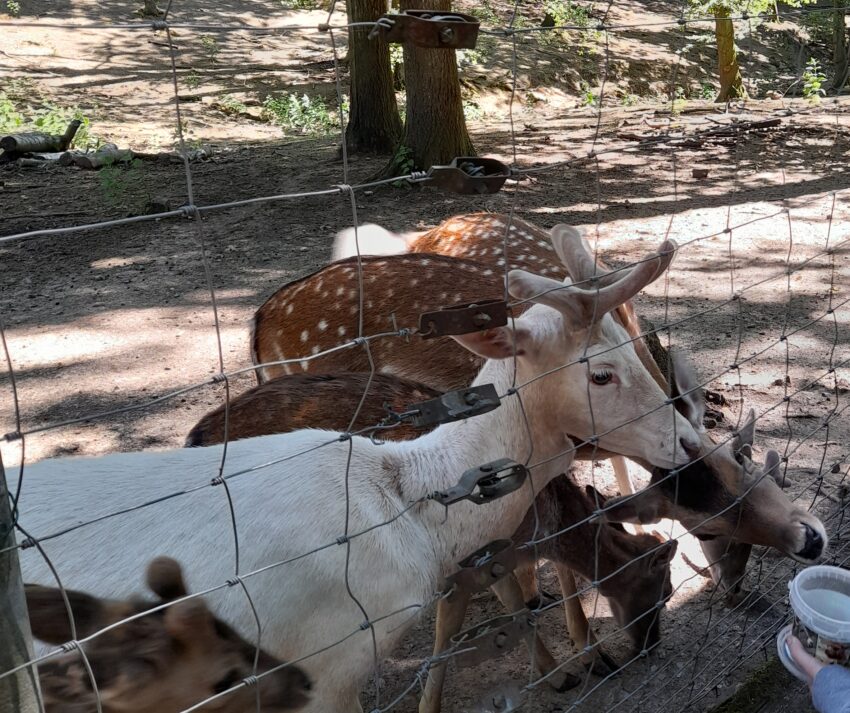 Today, we visited the Fauna animal park in Solingen and were not disappointed — we saw a few different animals than in the Solingen Bird and Animal Park and the Reuschenberg animal park in Leverkusen, where we had already been: What stood out most were their albino deer and the leafcutter ants that had a whole house to themselves to cut their leaves and cultivate their fungus. Read on to hear about that…

Lyons Cub was elated that his big cousin Vincent and his aunty had come along for this trip. He likes to play with older boys, who can talk reasonably with him, because he is advanced in speech. He called Vini early in the morning and set the meeting for 2 p.m. So we picked our relatives up and drove to the city of Solingen, the so-called “city of blades,” which is famous for its knife production. In her 20s, mommy even worked as a multi-lingual management assistant for the president of a cutlery company there.

The cool thing is, the animals in Fauna Tierpark have their own little Stonehenge:

The first animal we saw was a big, old lynx. He was not shy at all and slowly walked by the visitors.

Then, we came by the tiny squirrel monkeys, which we call “Totenkopfaffen” (“skull monkeys”) in German:

Afterwards, we walked by a big, white and black spotted zebu with an enormous hump on its back:

Next up were the meerkats, which are different from prairie dogs and marmots, by the way. They have a longer face and snout and are slimmer. They were so cute how they were playing and fighting, walking over a birch stem, digging holes, or just standing straight, looking around:

A curious nandu, also called rhea (the South American ostrich), raised his head. His snow-white mate was even prettier:

And now, drumroll for the most beautiful animal in the park, I think: the white buck! Astonishingly, there was a sign on the fence saying, “Beware of the White Buck.” I have no idea why. The one with the biggest antlers was just a juvenile and as nice and gentle when being fed as were the many does and kids. Maybe they meant a big, ole daddy buck, who was protective of his family??? He did not make an appearance. I counted five albinos among the brown ones. A whole family, wow. And one doe was very light tan, and another one almost black. Amazing.

A llama was parked in the shade at a safe distance to the visitors, having had enough of petting:

After having seen so many animals, we took a short rest at a playground. Lyons Cub went on the slide and climbed onto a rock. We had a short picnic on a park bench and then went on to admire the ants.

You heard right, ants. More specifically, leafcutter ants. They cut tiny pieces of leaves off, and it was long believed that they ate those. However, they transport them to their hiding place and feed them to fungi they cultivate in a symbiosis: The fungus thrives, because they protect it from mold and pests and feed it with little pieces of plants, and the ants eat the fungus. The ant house had long branches that went over the visitors’ heads, and the ants were crawling along those branches to transport the leaves to their fungus cultivates. I just hoped they wouldn’t drop off onto our hair, because some of them were rather big! And now for those who want to learn German: Pronounce the word, “Blattschneiderameise“!!! 😉

It was time to make our way back home and drop off our family. Lyons Cub fell asleep on the backseat, which means he had another eventful, fulfilled, and busy day 😉