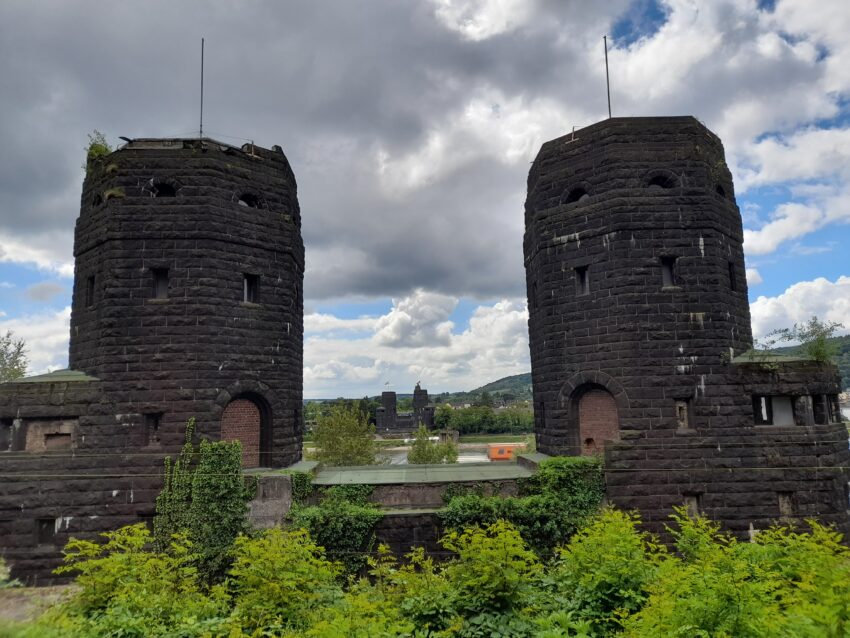 Lyons Cub was taking out his American friend John, and what better place to visit than the remnants of the famous Bridge of Remagen where the Americans crossed the Rhine River with dry feet at the end of WWII? Thus, on a cloudy Sunday, we set out to visit the city of Remagen and take a tour through the two towers (one bears the German and one the American flag).

The Nazis had desperately tried to blow up Ludendorff bridge at Remagen with different kinds of weapons (artillery hits, air bombing, as well as V2 rockets, the “Vergeltungswaffe”/”retaliation weapon” that was supposed to become Hitler’s wonder weapon) and naval demolition swimmers, so the allies couldn’t cross over, but they failed; the bridge collapsed only after 10 days, after the allies had made it safely across from the Eastern side into the Ruhr area, Germany’s industrial and coalmining heartland — on March 7th, 1945, soldiers of the 9th US tank division were able to capture Ludendorff Bridge undestroyed, and General Eisenhower is reported to have exclaimed: “The bridge is worth its weight in gold.” The Nazis executed the guy they conceived responsible for their failure (although it hadn’t really been his wrongdoing). Today, two of the four towers host the Peace Museum, founded in 1980 by the mayor of Remagen (who passed away this March 2022), with lots of artifacts such as an unexploded bomb, ammunition parts, a stretcher, radios, helmets, trench art (such as a homemade chess game on a painted cloth), and many photos and newspaper articles, including posters from the movie, “The Bridge at Remagen.”

In front of the two towers is a narrow pillbox with loopholes to shoot through; its door is now missing, but one can still climb inside:

When you step into the museum and have paid your EUR 4.50 entrance fee for one adult, you have the first and ground level of exhibited artifacts in front of you. You will learn about the history of the bridge, which was built during WWI, and see many newspaper clippings, prints, photos, etc. By the way, the museum is not handicap accessible; one has to mount a huge number of stairs to the top level.

Through the windows and loopholes, you have a gorgeous view over the Rhine River, the parallel towers on the opposite bank of the river, ships, and the neighboring tower. There were three different levels in each tower, and on the walls next to the staircase, visitors had glued cut-out paper peace doves with messages from all over the world:

Did you know? “Suppose They Gave a War and No One Came” used to be a slogan of American hippies and conscientious objectors (“conchies”), who didn’t want to go to war, and of whom some preferred to be imprisoned for a few years rather than to serve in the Vietnam war. This slogan became popular in the U.S. in 1966 through the mother of a conchy, and it is said to stem from a quote of a little girl in a poem by Carl Sandburg. In Germany, the saying, “Stell Dir vor, es ist Krieg, und keiner geht hin” became famous in 1981 through the peace movement and a corresponding graffiti on a Hamburg bunker. It was for a long time falsely ascribed to Bertold Brecht. Imagine this would happen today during the Russian war in Ukraine! It’s war and nobody comes.

And this is the world-famous slogan: “Cross the Rhine with dry feet.”

The top level contains a cross showing the faces of wounded and suffering people and healthy ones.

After we had seen everything in these two towers, we had a quick picnic at the water. We watched canoes rowing by and saw a gorgeous, big rose in front of the tower walls. Someone had stacked rocks on top of one another, so we added a top one. It didn’t fall over!

We walked under a remaining bridge part and heard our echo:

Then, we took a car ferry in a part of the city of Remagen called Kripp to the other side of the Rhine River, the village of Erpel, in order to see the parallel towers (one cannot enter these towers, though, and neither can one access the famous tunnel without prior booking and arrangements for guided tours).

The other side sports amazing rock formations of an ancient volcano, including a mysterious cave high up. We saw the Erpeler Ley tunnel, which was the German defenders’ last stand, from the outside. The railroad tunnel was linked to Ludendorff bridge, which was a railroad bridge.

The cave in the mountain that’s visible from the ground (see pic below) was used for mining, and there used to be a ropeway leading down from it to transport the basalt rocks that were harvested. Allegedly, a dragon once lived in this cave before it flew on to Drachenfels (dragon rock), where the German mythological figure Siegfried from Xanten slayed it. It is forbidden to climb in it, but in 2014/2015, Kai Sackmann, a cave explorer, video blogger, and publisher of outdoor adventure books, didn’t know about that and climbed into this old mining gallery. Here, you can watch some fascinating videos of what he saw. Do NOT imitate it!!!

Video 1: Kai Sackmann climbing up the basalt rock and finding the quarry

Video 4: Kai Sackmann inside the cave, looking out of its mouth over the Rhine River

Lyons Cub climbed on that rock all by himself and got down again! I changed his wet socks and shoes while he sat on there; of course, he had stepped into the water, especially when a big ship came by and created waves. It felt much nicer wearing dry shoes!

Look at the amazing basalt rocks! Their formation happened due to the cooling and solidification of lava flows in the interior. You can see the columnar structure of the Erpeler Ley sporting a fan-like arrangement, which came to be due to a multi-phase penetration of lava and as a consequence, an uneven solidification.

After hiking up and down a trail a bit, where we met several people on bicycles, we went into a nice restaurant in Erpel, where we had a gorgeous view over the Rhine River. After lunch, we took the ferry back and strolled a bit through the center of Kripp with a cute market place with colorful, little houses, a fountain, and a Maypole. We visited a tiny chapel, “Queen of Peace,” and then, just as it started to rain, we drove back.

Thus, if you are a veteran, a history buff, a rock enthusiast, or a cave lover, you should absolutely take a trip to Remagen!

1 thought on “… visit the Peace Museum at the Bridge of Remagen?”