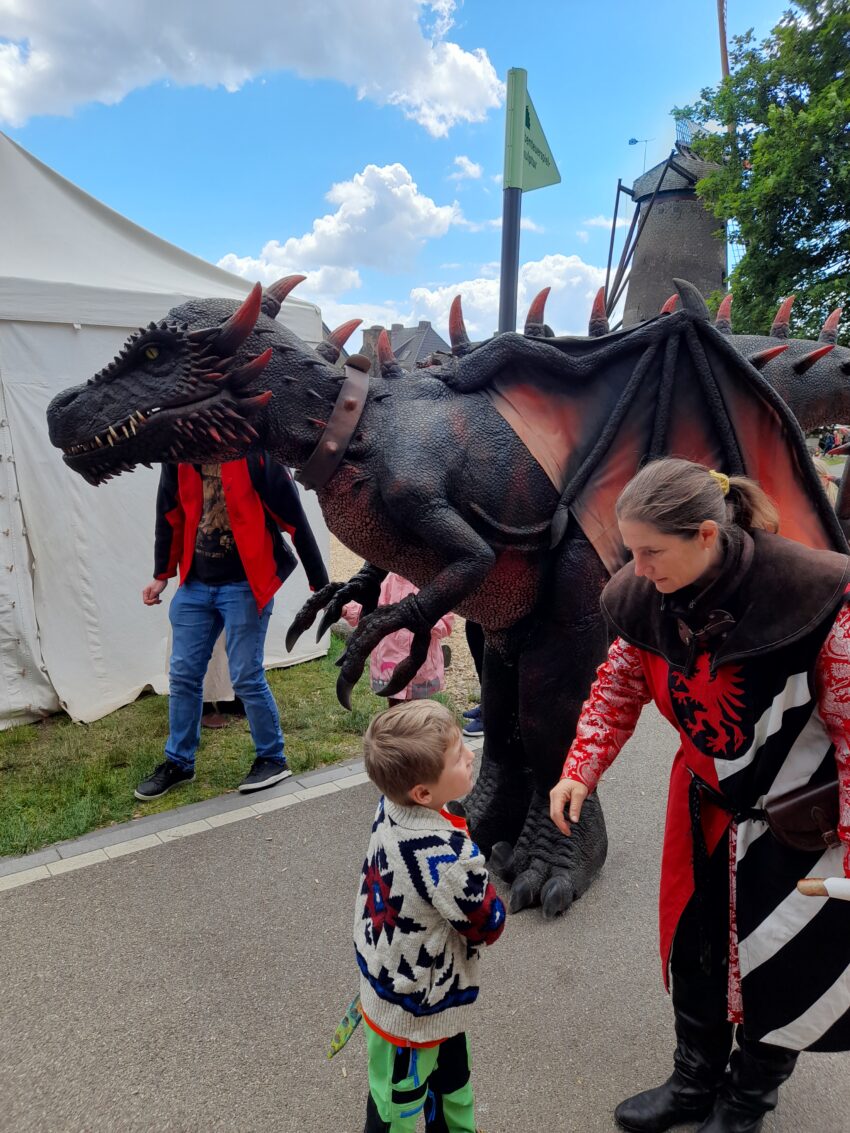 At the age of four, Lyons Cub is not aware of the Nibelungen saga and the story of Siegfried slaying the dragon yet, but he loves all things castle, knights, and dragons. Especially dragons!!! He even visited the village of Erpel on the Rhine River across from the famous bridge at Remagen, which sports a secret cave in basalt rock formations that was supposed to be that dragon’s home. Thus, we set out to experience another medieval market, after having attended the medieval festival in Witten, but this time in Xanten: The Siegfried Spectacle.

Xanten is the only German city that starts with an “X.” It used to be an ancient Roman camp. Nowadays, you can see a beautiful windmill and colorful, narrow houses mixed in with medieval walls and towers. It also has an ancient amphitheater and archeological excavations, but we didn’t go there to see the medieval market. According to the myth of the Nibelungs, Siegfried the dragon slayer was born in Xanten.

We didn’t want to get in a parking situation, so we visited family who live nearby and left our car there, and they took us to the market, where Lyons Cub and mommy split from the teenagers to let them do their thing. We went to the inflatable dragon bouncy castle first. It was right at the entrance and magically attracted all the little kids, while the older ones went on to the booths and activities:

Somewhere in this giant dragon with the long, steep slides, Lyons Cub vanished for about half an hour. It was even more impressive than the inflatable dragon at Kinderland GeckoFun in the city of Burscheid. Afterwards, he was ready to explore some booths and admire the beautiful windmill. You can even mount it and walk around on it, but the access was on the city side, so we didn’t go there.

There were lots of people in medieval costumes (they got a discount on their entrance fee). Lyons Cub had brought his wooden sword that he had painted at home with water colors. He also has an axe and a shield from the medieval festival in Witten, where we were recently, and he acquired a silver-painted cardboard helmet now:

There was another playground dragon to climb on, a colorful, mosaic stone-like figure with lots of kids sitting on its back and sliding down its sides:

The next attraction was the dragon boat riding. Those weren’t boats on water; they were like electrical go-karts on grass. (The driver only needed to step on a gas pedal; no pedaling was necessary.) Alas, the kids had to be five years old to ride by themselves, and Lyons Cub didn’t want to ride with mommy. Luckily, the boy standing in the line before him was five, and Lyons Cub became his passenger and paid only EUR 1.00 instead of EUR 2.00. Nice trick 😉 A medieval guy in a brown robe gave them instructions how to maneuver their vessel. Alas, the bigger boy wasn’t the best captain in the world; they made a little escape through the fence, where a mom with her baby was standing. The father of the captain brought him to a quick halt. Apart from that, they had great fun!

We had a little picnic that we had brought in Lyons Cub’s lion backpack on the wooden benches under the windmill. Then, we watched a tightrope walker, and Lyons Cub climbed a ladder (and made it half way to the goal) and won some “stardust,” which was fine pyrite. I think he did very well; I would not have lasted that long on this wobbly ladder 😉

The tightrope artist even walked with his eyes bandaged:

The absolute highlight was the dragon that was walking around the festival, stooping down to little kids and making some puffing sounds. It had impressive wings and a tail that almost knocked off my son’s helmet when he got in its way 😉

Sadly, the dragon was just a baby. Lyons Cub had awaited a big, huge momma dragon that he wanted to fight with his sword. This little baby was just good enough for petting. Who would harm such a sweet baby dragon 😉 It led us to its mommy, though: the big inflatable dragon, where my son again vanished in a horde of other kids.

Our last adventure was to watch the horses and the knights; we didn’t stay long enough to see an actual fight with their lances, but we admired their colorful attire.

After three hours, we met up with the teenagers at the entrance and were picked up by our relatives, where we had cookies and tea before driving home. What an eventful summer day!

2 thoughts on “… Attend the Siegfried Spectacle in Xanten?” 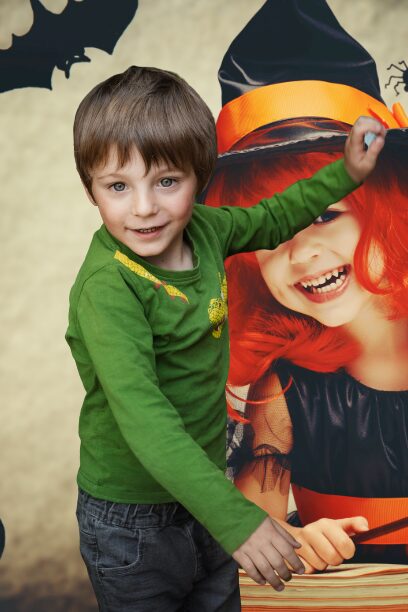 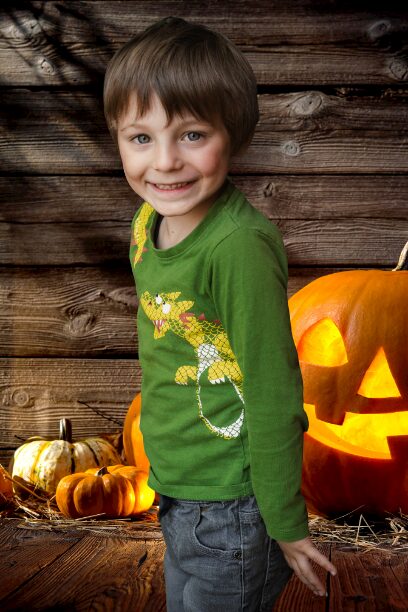