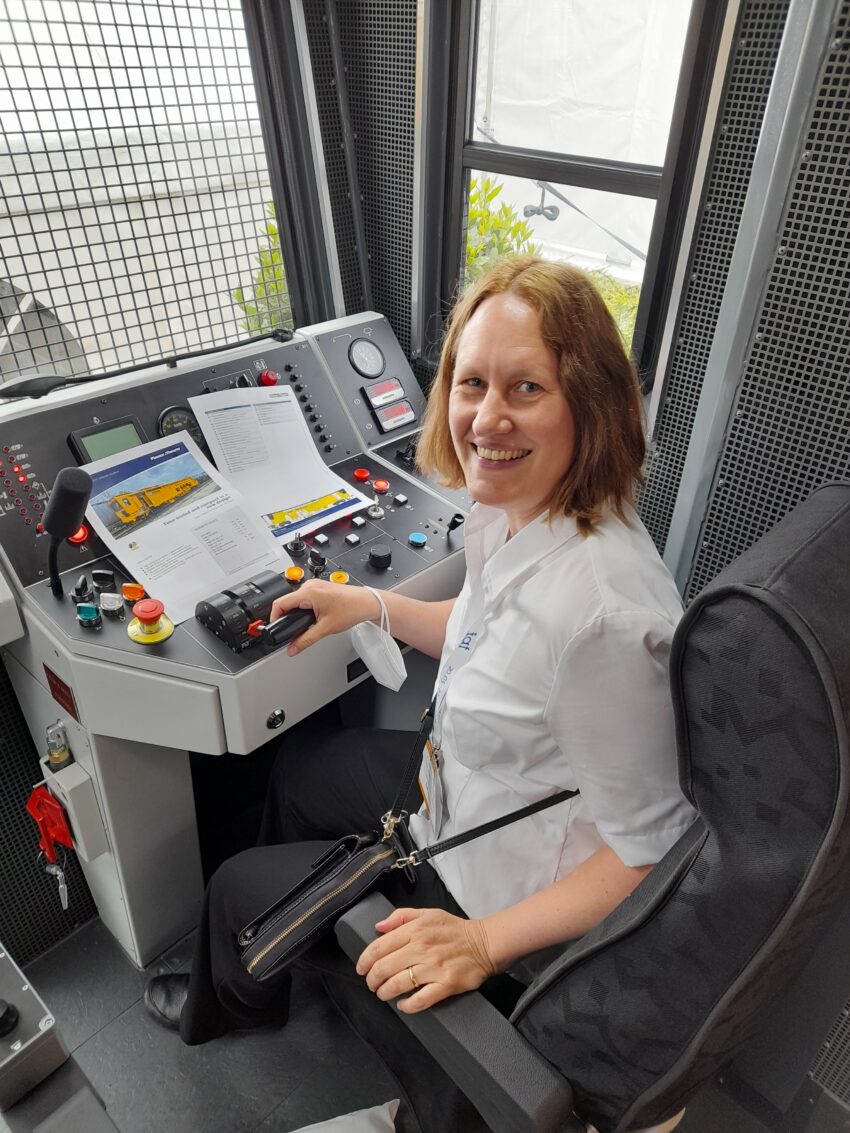 Lyons Cub really likes it at mommy’s office. He has visited her several times to pick her up, and one day, he was allowed to attend an office barbecue and chat with her coworkers. He spent time on the rooftop terrace, eating bread rolls and sausages and drinking apple juice, looking down on the train station and the trains. He also tried on a safety vest and helmet. What fun!

At kindergarten show and tell, he can tell his little friends that mommy is a training area assistant in a track construction workers’ training company. The coolest thing ever would have been for him to attend the railway fair when mommy went to the 28th International Exhibition for Track Technology (iaf); alas, children were not invited. But he enjoyed watching the movies and pictures afterwards!

The fair took place in the beautiful city of Munster in North Rhine-Westphalia. What’s surprising about this city is the vast number of bicycles — one almost feels as if one were in Holland! They have their own parking garage, the “Radstation.” (Funnily, there’s a sign at its door saying, “Don’t park bikes here.” There’s even a typo in it, because it should be, “abstellen,” not “abstelen.” Heehee. Old grammar teacher in me chuckling….)

There are also many bicycle paths (painted red to distinguish them from the gray pedestrian walkways), but one hears a constant swishing from behind and needs to step out of their way while walking from the train station to the fair grounds. Beware!!

Having made it alive to the entrance of the fair, mommy went through the ticket controls and first visited the company booth. She had a few talks with representatives from other companies — potential customers or lecturers interested in joining the training academy — and took some notes. The rest of the day was free for her to walk around, say hello to people, see other booths, and climb yellow, shiny tamping machines (so far, she only knew what a cab looked like from her company’s simulators). How fun to see the real deal!

The first task was to acquire a bag, to be filled with goodies. Naturally, mommy collected as many freebies as possible: Lyons Cub got two rubber duckies, mints, pencils, pens, colorful brochures with pictures of tamping machines, and lots of gummy bears when she got home!

There was one booth that displayed amazing antique prints and even music about the railroads from Japan, America, France, Germany, etc., including colorful illustrations and old books and newspapers. They stem from the private collection of the CEO of a media house specializing in railroad textbooks.

If you’re interested in the role of music in railroad lore, check out my paper “Railroad Lore and Mysticism in August Wilson’s ‘The Piano Lesson.'”

The inside of the halls was only half as interesting as the outside, where one could watch demonstrations of different tools and machines or eat Viennese sausages at a big stand.

Below are a few impressions of what the different tamping machines, ploughs, and ballast cleaning machines looked like — a hub for tech buffs!

These are some of the machines:

Interestingly, there was also a vehicle from TEREX; Lyons Cub’s grandpa Berni used to work for Orenstein & Koppel, the mining sector of which was later taken over by TEREX Mining!

Visitors were allowed to sit in the really comfy seats in the cabs and admire the many controls and levers. Representatives of the manufacturers gave demonstrations of how the screens and buttons worked. What I really liked was the romantic blue color 😉 One machine even had a little kitchenette with a microwave!

Here are different tamping units. They drive vibrating and oscillating tines into the little, loose rocks (= ballast) on both sides of the sleeper. Tamping machines are used for track maintenance to assure that the track is correctly aligned and has a smooth level along the rail, in order to prevent trains from derailing and to ensure a smooth travel for people and goods.

Of course, mommy tried out the tamping game by Plasser & Theurer in a simulator. She had played it before on a cell phone; you can download the tamping game app to try it out, too! One has to put the tines down in between the stone bars; otherwise, one breaks the sleepers. In a real simulator, it is much more fun than on the cell phone!! (The red color below means I killed the sleepers. Red x’s mean do NOT put down the tines; green x’s mean put them down.) You can adjust the speed to go faster!

There was much more to see at the fair. If you like hydraulics, try to make sense out of the entanglement of hoses. We Germans even have a cool term for that: “Kabelsalat!” (literally, “cable salad.” Those are hoses, though, even if they look like spaghetti.)

Try to find a leak in the picture above 😉

Well, this concludes my excursion to the railroad fair in Munster. Of course, Lyons Cub wants to set foot in a real tamping machine now, too. I really have to look around whether there’s an open house or family event some time where kids can come along 🙂