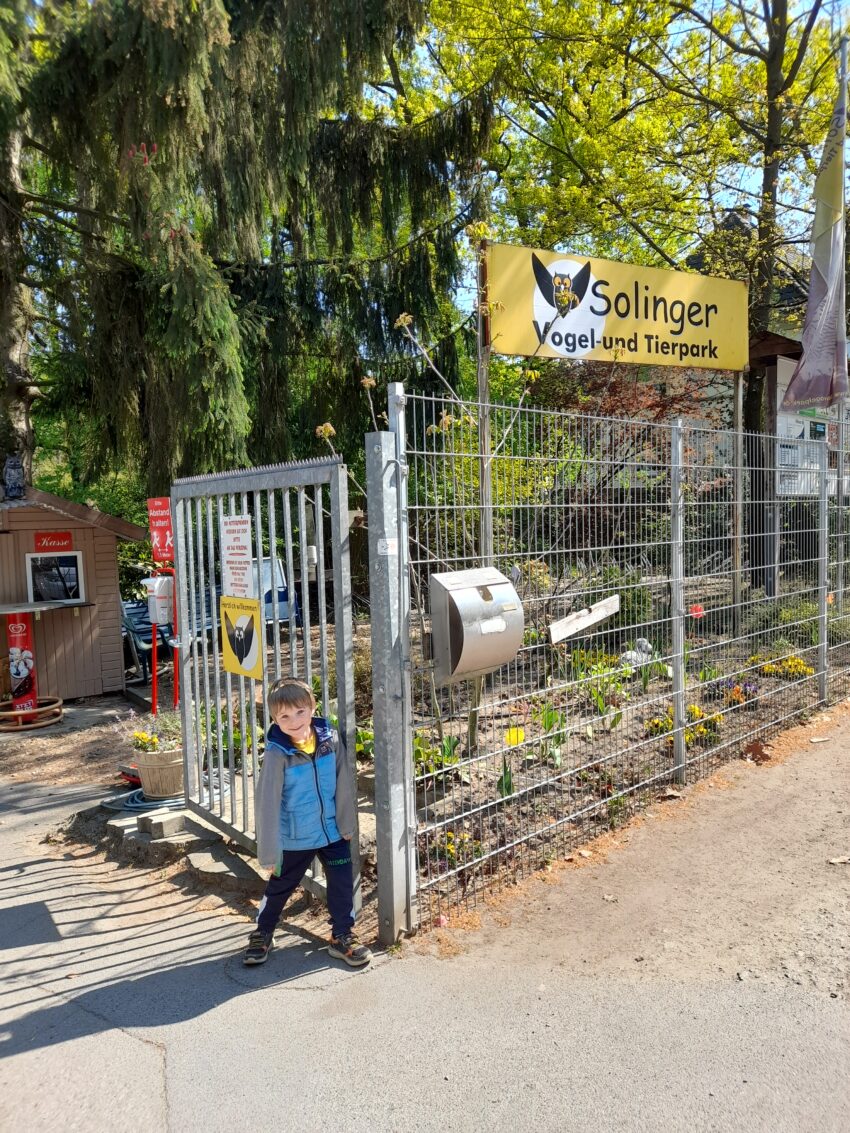 Lyons Cub loves to watch and touch animals. We’ve been at the Reuschenberg Wildpark in Leverkusen several times already, but today, we tried out a different place, the Bird- and Animal Park in the city of Solingen. It has more birds than the park in Leverkusen, even big storks and colorful pheasants. The most interesting animal we saw was a coati (“ein Nasenbaer” in German, literally, “a nose bear”). They really had cute, long white noses!

There was a fat coati munching on veggies on a little platform, and some smaller, playful ones at the bottom. One did some somersaults, as you can see in the video below 😉 The interesting thing is, coati live in a matriarchy, and the males are only “tolerated.” These South American animals are very social and intelligent, and they roam the jungle in groups to search for food up to the highest trees.

We walked into an aviary and saw (and heard!!) lots of different parrots, cockatoos, conures, ravens, and other kinds of birds. Leander played happily with his rubber snake while exploring the different animals.

A highlight was a colorful pheasant with his female. We were able to observe a mating ritual.

We also saw some wild boars and pigs (sleeping peacefully right in front of us),

a majestic black swan, a resting fox, and a big owl looking down on a colorful train carrying little children in a circle.

There was a learning station where children could feel different kinds of fur (soft, prickly, bushy, etc.) and see the pictures of the corresponding animals:

At another peeking station, the kids could lift green, wooden leaves and look into a cage with little white mice!

How very child friendly and full of surprises! At the entrance, one could also buy food packages with pellet food (one bag per child), so Lyons Cub was able to feed the llama, goats, and sheep:

There was also a little petting zoo into which the children could climb over a ladder, so they could touch the goats that went there on their own accord.

And for the tired people who had done a lot of walking, there were comfy reclining chairs for “boys & girls.” And when resting time was over, you could jump from tree stump to tree stump:

The best thing, of course, was the huge playground with a climbing tower, a little wooden house, a big sandbox, and plenty of swings and slides. We also had several bottles of soap bubbles and the bubble-making lawnmower with us. We’ve had that thing for a year now, and it’s still spreading fun. And bubbles…

Biggest news of all: Lyons Cub has a BFF!!!

And this was the beginning of a beautiful friendship.

1 thought on “… Visit the Solingen Bird- and Animal Park?”