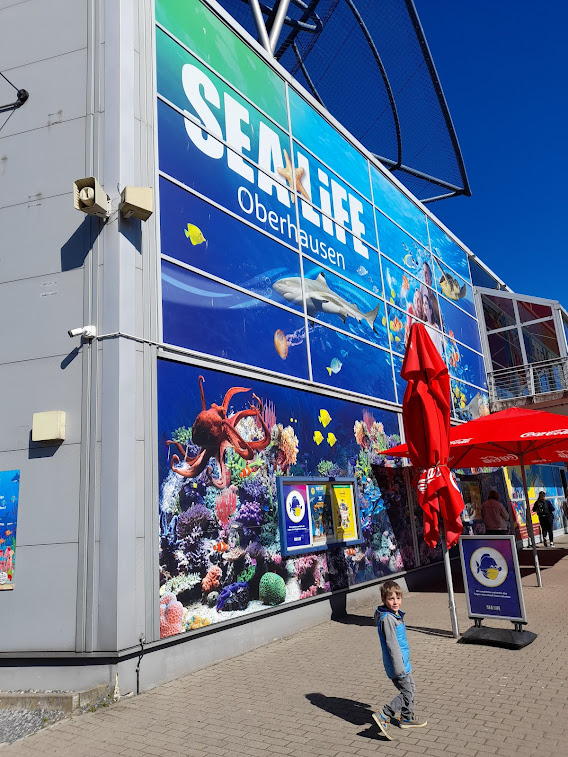 It’s Easter Sunday and our second day of adventures… We have a double ticket for Legoland and SeaLife, and now, we’re doing the second part of it. Lyons Cub had been to the AquaZoo in Düsseldorf before when he was merely 1.5 years old, on our summer trip to Europe. I figured that at 4, he would be more mature and able to enjoy the many animals. He did like the sharks, but all in all, he raced through the museum in one hour (we had planned three!).

We had perfect weather, and the adults admired the ships in the harbor while Lyons Cub dashed to the entrance… Loud music sounding like rolling waves welcomed us from afar.

The aquarium was very child friendly with little pedestals for the smallest kids to climb up, so even they could see the animals well. We saw big fish, most of them in gray, and smaller, colorful fish.

Lyons Cub saw some seahorses; a yellow one that was quite big, and some small black ones:

Very interesting were the lobsters and the deadly lionfish.

The starfish in motion were amazing with their little suction cups.

Then, there was a creepy fish with long teeth that moved only subtly:

Our favorites were the sharks, of course.

It was mesmerizing how the sharks were gliding slowly past the humans behind the glass. Visiting an aquarium is a great educational opportunity for a preschooler and fits well in our Montessori stance of letting children grow up with and cherish animals. Leander didn’t have the patience and stamina yet to look at the animals for a long time, but he was curious about them, floated from one to the next, and asked many questions. (“Are those real sharks? Aren’t they extinct? When do they die?”)

Visiting SeaLife was almost as cool for him as seeing the Wuppertal Zoo last year, or visiting the Reuschenberg Animal Park, where he fed the goats, observed the wildcat, watched the otters, and cuddled the llamas. Check out these animal adventures, if you’d like to read more!