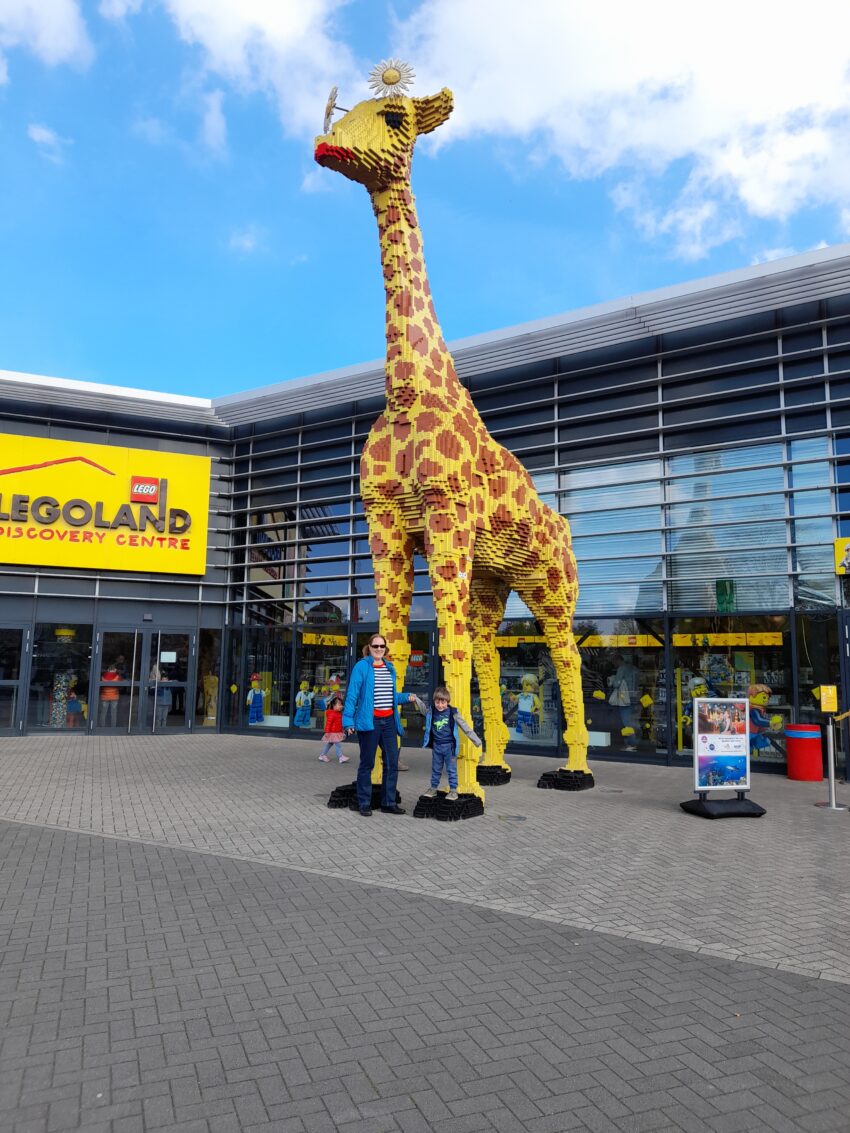 Lyons Cub’s Easter present was a visit to Legoland and SeaLife in the city of Oberhausen in the Ruhr river area in Germany (a former coal mining district). My son is a big fan of LEGO. Like other little kids, he started out with Duplos (his dinosaur duplos, for example) and evolved to dinosaur skeletons with little bricks. But how are LEGOs made? Today, he was about to find out…

At the entrance of the Legoland building, a huge giraffe greeted us (and it was, of course, made of LEGO). Children stood at its feet, and their parents took photos. When we entered, we all three (grandma came with us) got a red wristband that had the times on it we were allowed to be there (we had arrived at 11 a.m. and were supposed to leave by 3 p.m.). We also received a stamp card to put a stamp on every attraction we visited in there. Then, we were ready to start our adventure!

At first, we were in some kind of anteroom, waiting for the previous tour of the factory to end, because it could hold only so many people. In the anteroom was a red sports car like the one Michael Schumacher drove in Formel I, and Lyons Cub tried it out. He also sat on a LEGO police bike.

Then, the big doors opened and we were allowed to enter the factory. A nice tour guide explained how LEGOs were made from colorful granulate, how the colors were mixed and pressed, and where they come out of the furnace and fall onto a conveyor belt. The little kids stood in the front row and were excited to press big, red buttons to set the machines and the belt in motion. At the end, a colorful print was applied to the sample bricks, and the final product fell out and was handed around by wide-eyed, eager kiddos.

After the factory, we saw a big giraffe over a machine that presses memory coins with a stamp of Legoland. Of course, Lyons Cub received a coin (he lost it, though; first two Euros wasted 😉 ). Later on, he would stamp a 5-Cents piece, and he was able to transport that home safely!

He rode on a little piggy that got its head stuck in a bucket. Right behind it was a LEGO ghost train where the carts moved through LEGO caves with bats and spiders you could shoot with laser guns). There were LEGO monsters fighting on video screens that exploded with a boom when you pointed your laser gun at them and shot. We saw dragons, treasure chests, knightly figures and terrible warriors. It was just perfect for 4-year-olds — not too scary and not too boring.

The most exciting thing (at least for Lyoness!) was Merlin’s magic merry-go-round with life-sized LEGO Harry Potter figurines in the front, where you had to pedal in order to get higher and higher towards the ceiling (if you stopped pedaling, your car went down). Attention, it’s for kids aged at least 4 and 105 cm tall. Lyons Cub is 102 cm tall, but with his sports shoes and tall hair, he reached the required measurements on the scale and was permitted to get on. He was elated! Especially, when a BIG boy (at least 6) before him was scared and went back, but HE dared to go on it!

Then, we went to see Miniland, which has lots of miniature buildings such as the famous Cologne cathedral, an airport, a coal-fired power plant, a harbor, a train station, a soccer stadium, and of course a miniature of Legoland itself. If the kids pressed a button, a soccer ball rolled from player to player in the stadium, and the ground tilted a little. It was fun even if they didn’t get a ball into the goal. The light switched on and off in a certain rhythm, so the kids got to see all the attractions at night-time, too, with their lights on. The things were animated, meaning that the trains rolled and the boats could be moved by turning wheels.

The fun thing was that there was a little tunnel underneath the Cologne cathedral where children could climb through to pop out their heads from the middle of the buildings in a little plastic dome:

Legoland wouldn’t be interesting for the kids without the opportunity to build something by themselves. There was a station where you could assemble cars and race them down different tracks. There was a Barbie and friends café where you could build food at the restaurant tables, and there were houses, a fire station, a yacht, and streets where the kids could add to the finished, glued-on pieces (that were protected from being disassembled, of course).

Lyons Cub had great fun putting a figurine into the buildings and was disappointed that some windows were glued shut (and the fire-engines couldn’t be moved out of their buildings, either.)

Lyons Cub played on a huge LEGO pirate ship while mommy and grandma ate waffles at the café next to the playground. And all of a sudden, it was close to 3 p.m.! Our final destination was the LEGO shop, where Lyons Cub picked his Easter present: a Mario set and a Minecraft set. He proudly carried them out in a yellow Legoland bag. We walked over a little bridge with huge carps that swam to the surface, much to Lyons Cub’s surprise. Then, we had dinner at McDonald’s.

When we arrived home, we built the Minecraft set called, “The Jungle Abomination.” It was a bit difficult, although it was for 8-year-olds 😉 As daddy once told mommy when she said, “Among us, we have three doctorates; we should be able to build this!” – “But we don’t have a doctorate in engineering!!!”

If you haven’t been to Legoland with your kids yet, give it a try!