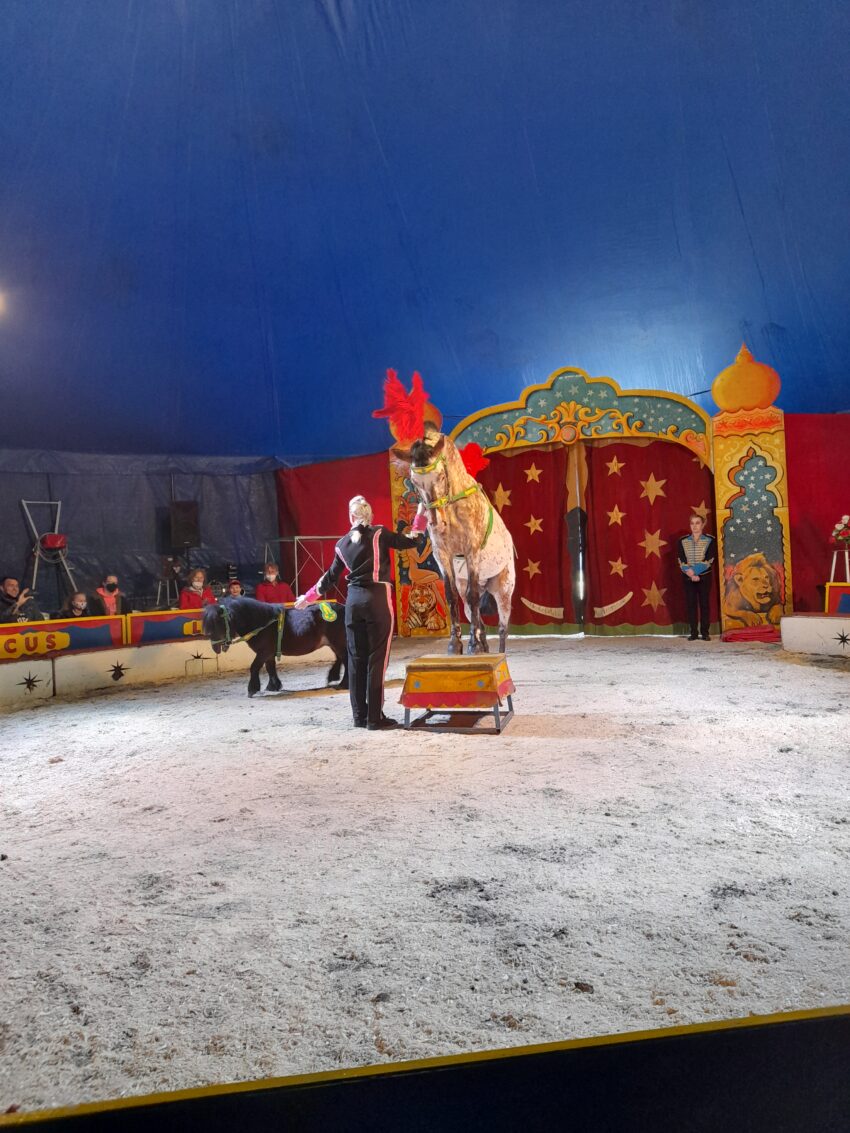 Yay, the circus is in town! No, not the big Moscow State Circus or Circus Krone, just a small family circus, but for my son, it was the first time ever to see one. I had read to him a book about a happy lion who finds his lioness at a circus, his favorite story at the moment, which he also listens to on his Tonie Box, so Lyons Cub expected to see a lion jumping through a fiery wheel, but there were no such things. What he did see were acrobats, a tightrope walker, balance acts, goats, horses, and donkeys performing tricks, a knife thrower, a juggler, and a female clown. The two highlights in the break and at the end were feeding the animals and riding a pony. This circus was very child friendly, just perfect for a 4-year-old. Leander loves Circus Liberty!

We went to the morning session, so we had to be there at 11 a.m. We actually arrived an hour early (and had brought a EUR 2.00 off coupon that Leander had gotten from his kindergarten), so we played on a little playground right in front of the circus tent until it was time to get our tickets and go inside. We got seats in the second row (the first one was reserved with name tags), but the people from the first row never showed up, so we got the best seats in the front!

Of course, Lyons Cub got cotton candy (he loves it since he got a taste of it at the Jurassic Live Tour)!

First, the horses performed their tricks, standing on their hind legs, the tiniest pony running underneath the biggest one, and coming so close to the audience that the kids in the front row got to touch them. Two dappled horses, Max and Moritz, performed to the music of Paw Patrol, carrying a plush Chase and Marshall! The donkeys also danced and galloped to the music.

Then, there was the goat act. The goats walked to the rhythm of the music, stood on pedestals, and climbed up a scaffold. One goat even walked on a turning drum!

Which child does not love tightrope walkers? She did not fall!

Lyons Cub was a bit more concerned when the juggler did the fiery torch act (right after a fire chain act). Scary stuff! Nothing happened, though. The circus director juggled with dancing plates and did a balance act with three skateboards on top of one another on a high pedestal. Two ladies danced with lassos, which was amazing. Then, there was the knife thrower, who threw the knives all around a pretty, blonde lady. My son was impressed, but he liked Emma the Clown more, especially when she tried to hide an apple from the circus director by putting it in her mouth, after the ones she hid in her armpit and between her legs had fallen out. This part was very interactive; all the little kids in the audience tried to give the circus director hints by screaming, “She ate it!!!”

During the break, each child could buy a healthy snack food bag for EUR 1.00, containing carrot slices, pieces of bread, etc. to feed the animals! Lyons Cub fed Max and Moritz, the tiny ponies. He was a bit worried the biggest pony (on which he rode after the circus show was over!) would bite him, but he finally managed to give it a piece of bread without any harm.

In the beginning, he was a bit too scared to feed the huge, woolly camels, though! Would your child have done it??? He managed in the end, carefully, carefully. My brave boy 😉

We saved the best for last: Riding a pony! Lyons Cub picked the biggest one there was 😉

Has your child been to a circus yet? Now that the Corona restrictions have fallen in Germany, I definitely feel better about going to indoor venues with my son. And we’ll certainly go to another circus again soon. He just got the taste of it. Thanks, Circus Liberty!!!

2 thoughts on “… Take Your Preschooler to the Circus?”