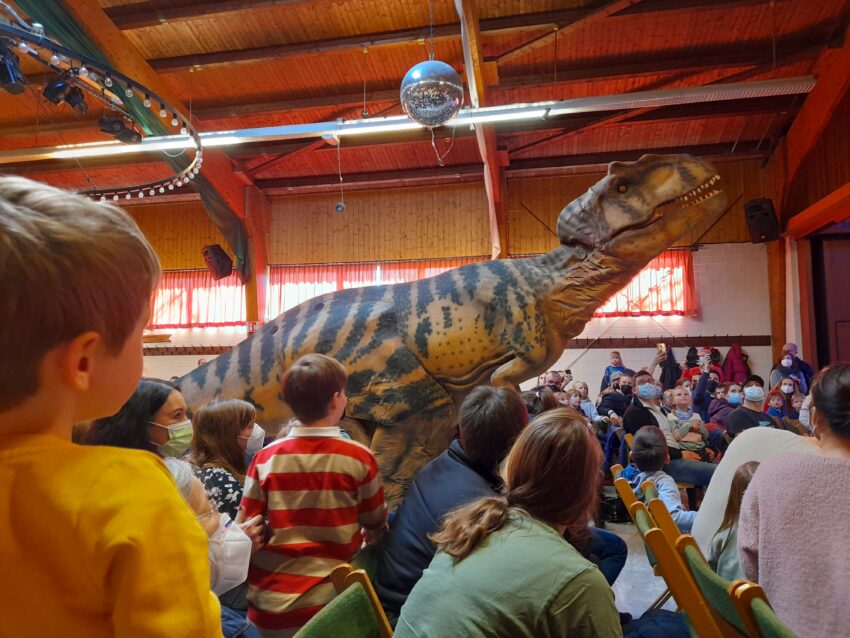 Strictly speaking, “Jurassic LIVE Tour” is a misnomer, and my son knows that the dinosaurs have long been extinct because a meteorite hit Earth and killed them all. Still, he seemed to forget about that from time to time, asking me, “When will they fight? When are the real ones coming?” We’re at the dino show in a big hall, watching a T-rex, a triceratops, a velociraptor, a flying dinosaur, a hatching dinosaur, and the looooong neck of a brachiosaurus (I think there wasn’t a body to it; it just peeked out of a window and retracted its neck through it again).

Well, they didn’t fight at all. The only time they played an act was when a baby triceratops was among the audience, getting stroked by many children, and a T-rex came out onto the stage looking for food. Of course, there was no bloody fight, and the baby managed to get to his mommy before it could become the dinner of the hungry T-rex (otherwise, it would have been too gruesome for the many toddlers that were there). But this show was very child friendly and like a petting zoo with huge plastic dinos held and operated by young people from Germany and Austria (even a kid actor was present).

The show was well-designed for the littles. The dinosaurs were presented one by one, and the moderator told a story about each of them, talking about when it lived, what it ate, how big it was, what its teeth were like, how big its brain was, etc. Lyons Cub knew many things already and often raised his hand to answer questions. The handlers with their long rubber gloves “to protect them” walked through the rows, presenting the dinosaurs to the children. There wasn’t a real story, just a presentation of different kinds of dinosaurs and their simplified scientific description. However, the main attraction was “feeding” them and touching them, and I have to admit that they were very nice to look at and probably a bit scary to the youngest in the audience. The longest dino was 7 meters!!

There was a good bit of humor, too, especially when some dinos farted loudly or tried to escape or even bite the narrator!

The moderator made it all seem pretty dramatic, almost scaring the youngest kids; for example, he called several children on stage, put a Viking helmet with horns on their heads, and gave them fake meat to feed the carnivorous dinosaurs. My son started crying when the moderator announced he was looking for a boy to feed the next dinosaur. “I am a boy!!!” Leander shouted, but there was a hall full of little children, and although he stood on his chair and raised his hand like crazy, he wasn’t chosen.

He still enjoyed his cotton candy and a plastic basketball game toy he received, and he got to touch several dinos that were walked through the rows of chairs to greet the children. There was a 15-minute intermission where we went to the playground outside the hall to have a picnic and climb and slide. My son saw a little girl who started to cry when she had to leave the playground and go back inside. She thought the dinos were real.

All in all, it was a nice and educational excursion. If your kiddo hasn’t been to a dinosaur show yet and there happens to be one in your vicinity, go for it 😉 I’m sure the children had a lot to talk about in kindergarten the next day…

1 thought on “… Touch the Dinos at the Jurassic Live Show?”