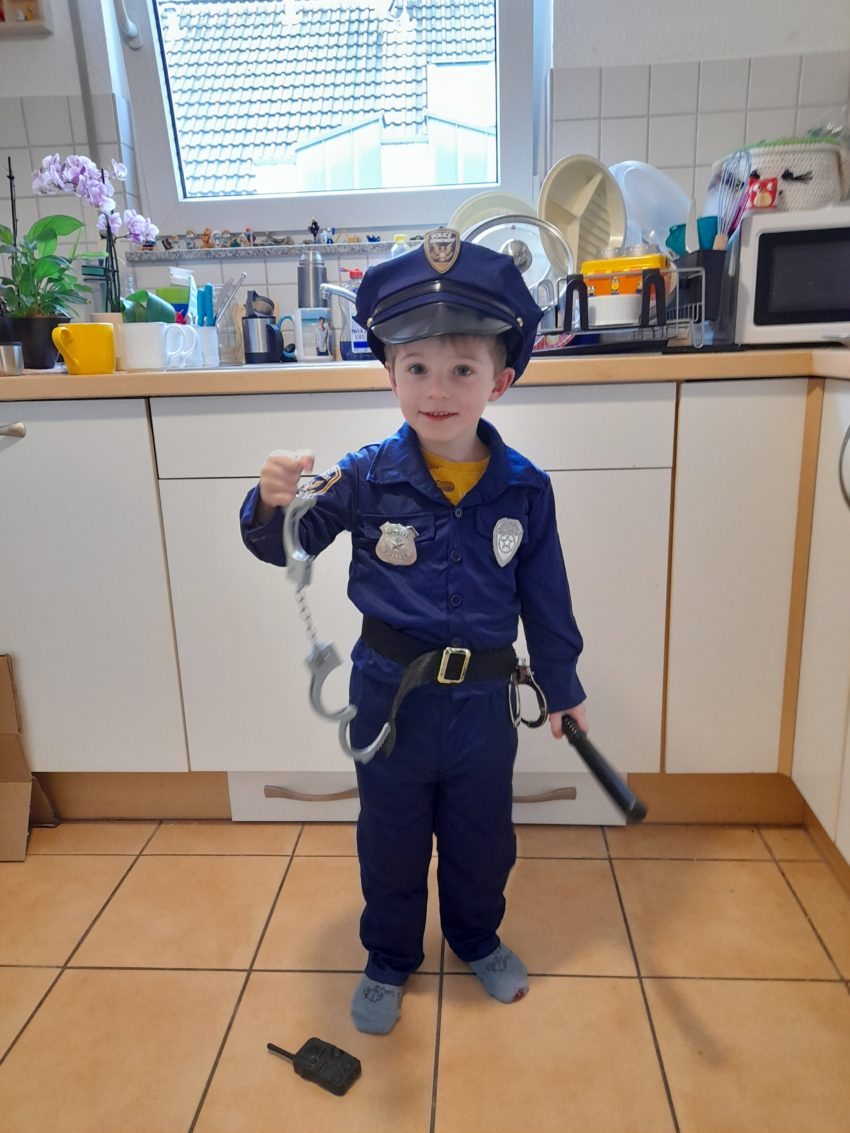 This year, like in the past two, there won’t be much of carnival going on, at least not in our city, because many processions for kids were cancelled due to Corona. Normally, Germany is famous for big carnival celebrations, especially in the cities of Mainz and Düsseldorf, with huge processions through the cities with floats and masses of people in costumes. Coming Monday is “Rose Monday,” the highlight of German carnival sessions.

Did you know that “Karneval” comes from “carnem levare” (Latin for, “take leave of meat”) and introduces Lent, where the Catholics shouldn’t eat meat (and sweets, etc.) until Easter?

However, with war going on in Ukraine, we shouldn’t really celebrate but rather donate that money to help the refugees who are going to come to our country. Leander donated EUR200 from the profits of his sales of daddy’s baseball trading cards and hopes he was able to help just a little bit. He walked with mommy to the bank this morning to transfer the money (dressed as a policeman, so no bank robbers would steal it). He was so looking forward to arrest one with his plastic handcuffs, but none showed up.

The little ones don’t know much about what is going on in the world yet, and for them, there should be a little bit of fun at home during these days. Lyons Cub is not going to a costume party like his big cousins, but his kinderkarten had a costume day for the children on Friday, and they had built a confetti cannon, and at home, he disguised as policeman to celebrate with mommy and grandma. He picked out pink party hats and whistles and tried to make some noises (though it was mostly breathing noises, heehee; he’s still practicing).

Watch this video to learn some German: He says, “Hände hoch, oder ich schieße!” (Hands up, or I’ll shoot!) He doesn’t own a pistol, though, because we’re against toy weapons. He has a plastic baton and a police radio, and some sheriff plaques.

Here’s his party whistle. We had those when I was a little kid, and they’ve been fun for ages:

For all the people out there who ARE celebrating this weekend and/or on Monday, please also remember the people of Ukraine, from whom it was taken to make those days fun for little children. Giving just a little bit might go a long way.