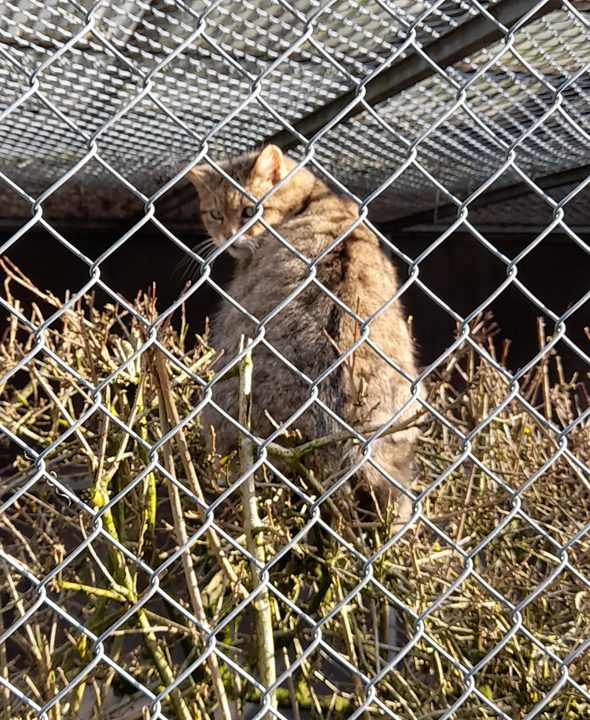 Lyons Cub grew up with two cats, Frankie (our rescue from a reptile show) and Felix (our stray that came with our house in Clarksville, TN). In the apartment where we live now, we’re not allowed to have cats, so of course, my son wanted to see the one in the animal park, but no such luck…. Either, it was too cold, too rainy, too loud, too busy – it never showed its face or even the tip of its tail. Finally, we were lucky: For a whole year, we’ve never managed to see the European wildcat at the Animal Park, but this time, it was just sitting there, plump and round and well fed, in a bush licking itself and minding its own business, soaking up the February sun and enjoying the unusually warm weather 😉

The sign reads that the European wild cat is a loner and was once widespread in Germany. However, due to hunting and loss of habitat, it has become very rare. Although it easts mostly mice, the wild cat has been hunted as a predator of wildlife. Since 1934, the wild cat is under protection in Germany. These shy and nocturnal cats are known as “culture evading” and are rarely to be observed in nature. They differ from house cats through their plump stature and their bushy, stumpy tail. A single cat lives in a habitat of up to 20 kilometers (12.43 miles) that it marks with scratch and scent marks. Except for during mating season in February and March, the wild cat strictly evades its own conspecifics.

If your kid likes cats, have you found a suitable cat book for a preschooler yet? Below are some ideas 😉

And if you’re interested in Lyons Cub’s encounter with the porcupines, alpacas with their crias, and baby goats, check them out here…

3 thoughts on “… Visit the European Wildcat at the Animal Park?”