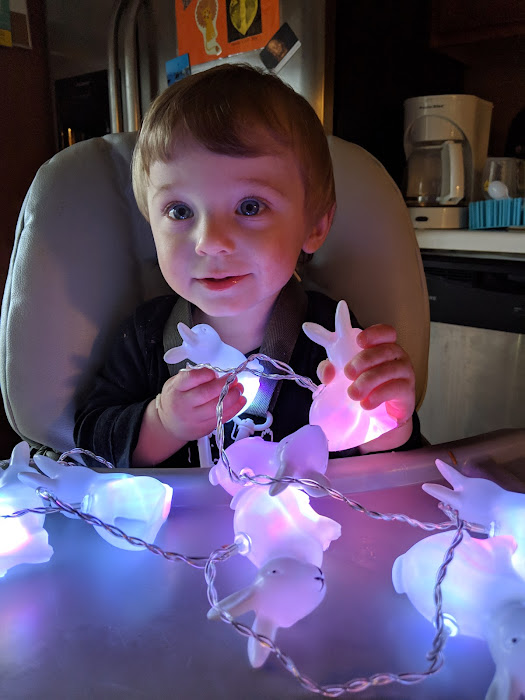 Today was one of those days…. I took my son to the city (we went to see his pediatrician to get a prescription for nose spray and cough syrup, and then, we ended up in a shoe store, because mommy needed new shoes for work and Lyons Cub needed Crocs for kindergarten). In the back of the aisle, where the children’s shoes were, I steered towards a rack with dark, blue Crocs to pick a pair for my son, when he exclaimed, “No, those are dumb! I want the pink glitter shoes!”

If you have read Little Women (published in 1868), you will remember that the twins Daisy and Demi wore pink and blue, so people could tell the girl and boy apart. The question of which gender to associate with which color (if at all) seems to be an old one.

Well, I’m a girl and I would not have wanted anything but the dark, blue Crocs, even as a child. But my son was so enchanted with the pink glitter ones that he performed a little happy dance with them at home:

He wore them the whole day inside, although they are supposed to be for kindergarten. So I took a sharpie and wrote his name on them, to prevent them from getting lost in kindergarten. He’s so proud; he wants to tell another, bigger girl there that he now has the same shoes she wears! The clerk who sold them to us was very nice and told him he picked pretty shoes (plus, she spoke English with him!). However, when we went to a clothes store afterwards and I held open my bag for the clerk to put in the pullover I had just bought, and I showed her my son’s shoes that were already in the bag, she told me: “Oh, don’t worry. My nephew used to put his mom’s shawls all around him once, too. He won’t be ‘the other way round.’ He’ll be totally normal.”

Erm. It was an older lady. But still, in today’s society, I would have expected that it is “totally normal” for any child to love pink and glitter. My son’s first bike was also pink (I let him choose between a pastel blue and a pink one at ALDI):

And his favorite plush toy used to be a little pink piggy that slept with him every night (he still has a piggy in bed with him at four years old, but a different one):

He also loved the battery-driven light chain he got for Easter when he was 1, especially when the bunnies turned pink:

And when he was allowed to pick a Disney character plushie, he went straight for Minnie Mouse (he still cuddles with her two years later):

And one day when I picked him up from kindergarten, he was wearing a pink kitty hair clip that he had found somewhere, and it had to stay in his short hair for the rest of the day, until he had to return it to kindergarten the next day, because someone was missing it. He was inconsolable, and I ended up buying a whole package of hair clips, from which he’ll get one every time he does something very nice I want to praise him for.

The academic paper, “Pink and blue: the color of gender,” tells us that applying colors to gender is a 20th century, mostly Western European and American custom. And who would have thought that it once used to be the other way around?

I do have to say in our nativity scenes from my childhood, Mary always wore a dark blue dress or cape, and this is how I have seen her most often depicted on ancient paintings. Hey, even in my son’s Fisher Price nativity scene of Little People, Jesus’ mother wears blue! It’s called “Marian blue,” the color of an empress. The author quotes a fashion magazine of the past century: “Thus, Dress Maker Magazine stated: “The preferred color to dress young boys in was pink! Blue was reserved for girls as it was considered the paler, more dainty of the two colors, and pink was thought to be the stronger (akin to red)” (Frassanito, 2008, p. 881). He goes on to say that this custom reversed in the Second World War.

The author lists a few explanations for gendering colors, more or less plausible. One is that Audrey Hepburn made pink popular for girls due to her feminine, pink dresses. Another one is that the Nazis used pink for girls, and this is perhaps why they assigned the pink triangle for homosexual prisoners in their death camps. His final reasoning goes all the way back to the ancient hunters and gatherers, arguing that females can see red-green better than males, since they mainly gathered food and had to distinguish the ripe (red) edibles from others.

Whatever people come up with for reasons, colors should not have genders. My son is attracted to pink. I remember how he went for my aunt’s duster in a Bavarian nursing home when we visited her in 2019 (although maybe that was because it was fluffy):

And nope, I don’t “worry” about anything. My son is who he is, and he is loved for what he is. I will always give him choices, and he can pick what his little heart desires. And if it’s nail polish or a pink hair clip, so be it. And if other kids or adults behave badly towards him because of his choices, they’ll have a talk with this momma.

2 thoughts on “… Have a Son Who Loves Pink Glitter?”