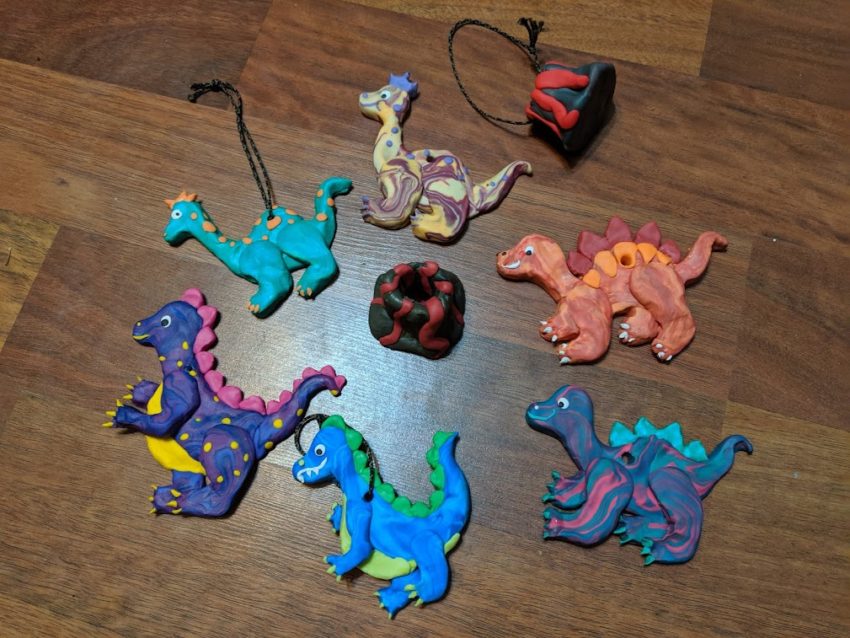 Are you an artsy, crafty mommy? I love to do art projects with my son, but as a full-time working mom, I don’t get much time for that. During the summer break is the time when I’m most productive. When my son was two years old, we started working with polymer clay. Lyons Cub was too little to form recognizable shapes at that point, but he learned how to roll the balls mommy needed to create dinosaurs and volcanoes (the topic he loved most). He also learned how to flatten the dough, which he had practiced many times before when we were baking together. In addition, he put the “fire” into our volcanoes (red clay sausages stretching from the inside across the outside walls of the hollow volcanoes).

Here, you can see our dinosaur project. There’s actually a funny story to it. We used the kind of polymer clay you can either boil to harden or bake at 135℃ (275℉) for 10-15 minutes. We did two separate trays. The first one went very well (we left it inside the oven for about 12 minutes, and I looked inside and checked to make sure the dinos were ready to come out). When we put the second tray in the oven, however, I got distracted and left them inside for a few minutes too long.

Dark smoke emanated from the sides of the oven door, and it began to stink terribly.

I switched off the heat immediately and took the tray out. Alas, I hadn’t used baking paper, so some of the dinos were stuck to the baking tray, and I had to loosen them with a knife. One had a singed head and wings and stank like crazy (as did the whole kitchen).

The worst was that my alarm had been set off with a deafening noise, and by the time I had secured my toddler away from the hot tray and the fuming clay dinos to switch off the alarm, the doorbell rang and a nice Clarksville fireman in full armor and with an oxygen tank on his back was standing there, ready to extinguish our non-existing fire 😉

In order to avoid another incident with the Clarksville, TN fire department, I bought self-hardening air-dry clay for kids and made a froggy and a flower for my son, but I wasn’t very satisfied with it. This clay is really foamy and breaks apart. It’s like your kids play with hardened marshmallows. I made a few cars, and when Lyons Cub played with them, he broke off the tires immediately. The giraffe lost its legs after a few rounds of playing.

Thus, we returned to the polymer clay that has to bake; only this time, I’m really careful not to leave it in the oven too long! The dinos were our 2020 and 2021 Christmas tree decorations! The colors are as fresh as ever, and most of our dinosaurs survived the move overseas (only a couple broke a leg when they got banged around in their crate). I can recommend this polymer clay for doing crafts with your kiddos, as the result is beautiful and long lasting. I haven’t tried boiling yet…

Lyons Cub was so thrilled to receive a box of colorful polymer clay for Christmas this year!!! We’re off to new projects 🙂

And these are the first figurines we made with his polymer clay that he unpacked in the video before: Robots!!! I have to say, not bad for a four-year-old… The funny thing was, when he saw grandma’s pink-and-yellow something, he exclaimed nonchalantly: “This looks like a monkey! Oma doesn’t know what a robot looks like!” 😉

6 thoughts on “… do Arts and Crafts with Polymer Clay with a Toddler?”