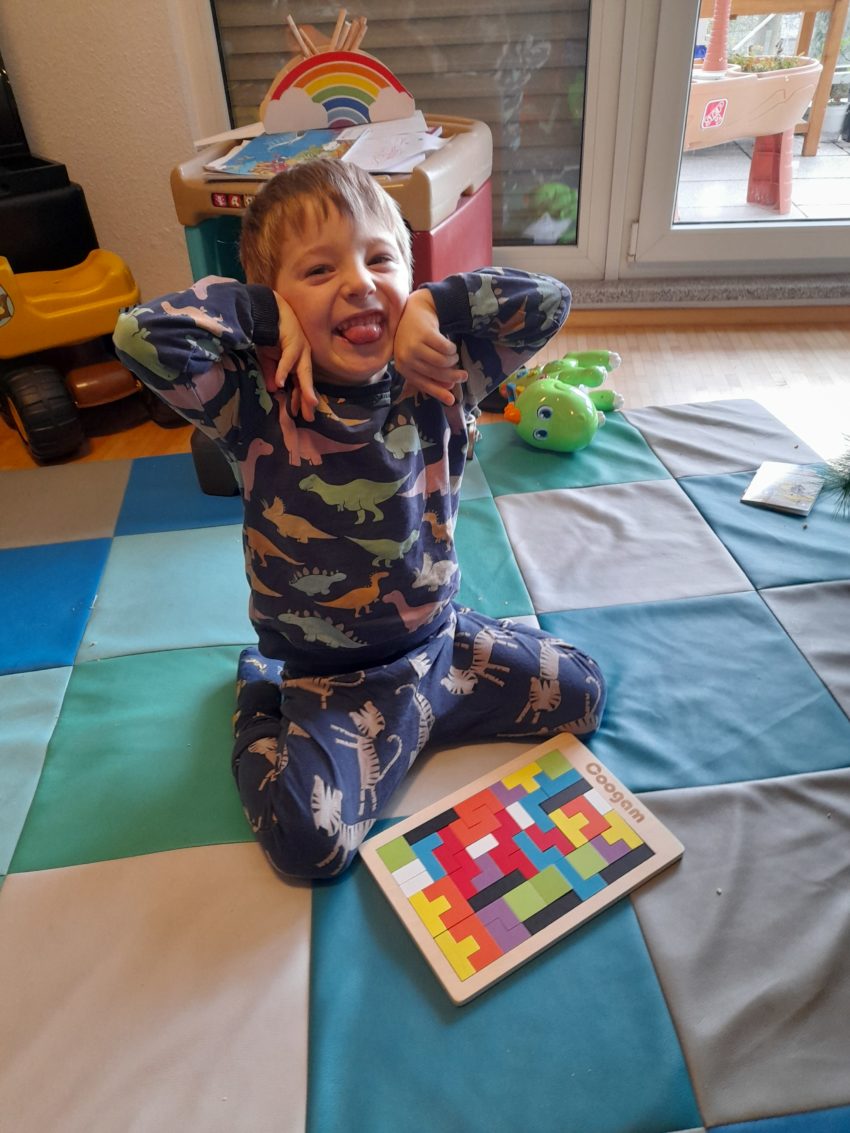 As a child of the 80s, I loved to play Tetris (invented 1984 by a Russian software engineer) on my gameboy (invented 1989). I couldn’t conceal my joy whenever I won a “big rocket launch” and still remember how my mom and dad played Tetris on two gameboys connected with a short, gray cable, and she was always super proud when she beat him. Good old times! So we’re back to the roots, and Lyons Cub got a wooden Tetris game for Christmas this year, to start building his strategic skills — all screen free!

And if you ever wondered where this cool original Tetris song came from — it’s a song to a poem by Nikolai Nekrasov called Korobeiniki, which told the story of the meeting of a girl with a peddler, bargaining over goods as a metaphor for courtship. Not that your kid needs to know that… but for the parents, it’s a nice piece of information. Anyway, I’m glad I got another quality wooden game for my son for Christmas (and this one is low budget!). The other one he received was an extension to his wooden marble run. Both games challenge his strategic thinking skills. The former is for 2D perception, and the latter for 3D perception, both very important for his growing mind.

Turns out Lyons Cub was better than I expected!! We played this game taking turns putting down a shape. Sometimes, it didn’t work out and we had “holes” left over at the end, so we removed a couple of shapes and voilà! we finished the game. It’s great fun and so simple!

Of course, it’s much easier than the computer game, since the shapes don’t come crashing down on you with ever increasing speed, so your child has plenty of time to ponder where certain shapes must go. Lyons Cub figured out quickly that the orange “C” shape and the yellow shape fit well into each other to make a big square. The red “z” shapes are the most annoying, because if those are left over, they won’t fit anywhere. The purple “corners” always proved very useful to fill in the gaps just when we needed that.

The package we bought included a sample picture of a winning game, so we rebuild this one first. After that, we had a few trial and error runs, and then, he pretty much got the hang of it and simply filled the wooden tray as evenly as he could from the bottom to the top, rearranging the few leftover pieces until they fit. If your child is just starting out with it and doesn’t know how to finish without a “hole” being left over, you can use the following images of our wins to simulate 😉

There are so many possible solutions! I think this is a great game for kids 3 years and onward (not younger, since the little blocks could be swallowed). Lyons Cub was scared to do them alone at first, but taking turns with mommy built his confidence, and he took over from there. I was just amazed at how long he was able to concentrate hard on that game! We did about ten rounds before he wanted to see Tetris on his YouTube kids channel, like this soft-body Tetris with gummies in water 😉 How very satisfying to watch this!

Here’s our video of a rather difficult game, where we had to retract several of our previous steps to finish the game. This just goes to show: never give up!! If you make a mistake, figure out how to reverse it and start all over until you reach our goal. Then, celebrate with a happy dance!

Thus, if you’re still looking for a fun strategic game that will last for years and have a budget of ten bucks, consider the wooden Tetris game 😉