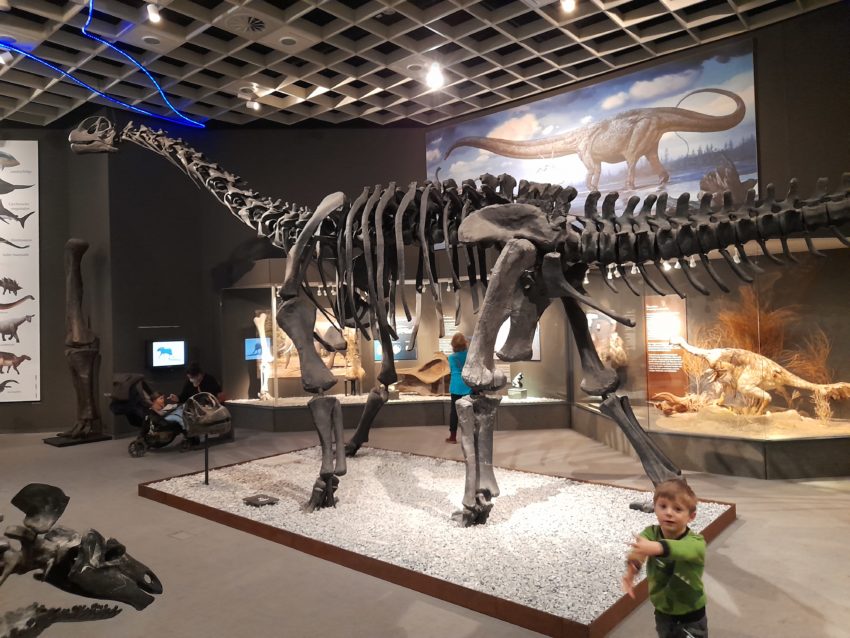 Leander’s pre-Christmas gift arrived on December 21st in the form of a visit to the LWL Museum für Naturkunde mit Planetarium in Münster. My son just loves dinos, which shows in his dino sweaters, dino pants, dino rocker, LEGO Duplo dinos, VTech Match-a-Saurus, and dino race track. He knew what dinosaur skeletons look like from his many science books for kids about volcanoes, fossils, and dinos, but he had never seen a real one. This was about to change…

Münster was a two-hour drive away. We left on the sunniest day of the week (mommy had watched the weather forecast anxiously) but ended up driving into the thickest fog you can possibly imagine. Finally, we arrived at the museum and struggled to find the parking lot. We ended up parking a bit further down the road and to walk through a park (it was freezing cold, and the trees and bushes were white with frost) until we made it to the entrance, where two triceratops greeted us grumpily.

Lyons Cub couldn’t wait and sped towards the entrance. They had the “2-G rules,” meaning “geimpft und getestet” (vaccinated and recovered), and they checked our immunization apps and our passports or ID’s thoroughly at the entrance. All visitors (except for little kids) wore their FFP masks. Then, we were admitted into the hall. All the “ah’s” and “oh’s”!!! The first thing my son shouted was, “Look, Mama, the Earth is wearing a mask!” They had corona virus models hanging from the ceiling, too. My son received a black plastic stick to touch the interactive buttons and screens with. (They were collected again at the exit.)

We left our jackets and picnic bags in a locker. Then, we walked into the exhibition. First off were the ancient humans. My son wasn’t very interested by the early humans, although they were nicely arranged in their historic clothing in front of a camp fire. There was even a grave to show how they buried their dead, and a hut with a bed and food inside to show how they lived, including their domestic animals, a goat and a wolf dog. Leander admired their weapons and was allowed to touch the replicas of their hand-axes.

Lyons Cub was fascinated by the skulls! We’ve been reading a story about Yakari, the brave Native American, and my son likes the story where Yakari’s friend breaks off one of the horns of a great bison’s skull, to be met with its ghost’s wrath… Now, he saw lots of skulls with horns from ancient bisons.

Then come some ice-dwelling animals; Leander loved the polar bear, whom he knows from our stories about Lars, the little polar bear. He saw penguins, a snow fox, and an elk, too.

But we had come for the dinosaurs, and there was definitely not a shortage. The skeletons were humongous! The ceiling was really high, but so were the necks of those beasts. (This mommy is just glad that sonny boy didn’t want to climb any of those.) There was a guard dressed in black in every exhibition room to make sure this didn’t happen. There were a few (rather gruesome) movies for kids in animated fashion, showing how dinosaurs hunted and ate smaller ones and how their sharp teeth worked. A bunch of kids joined my son and were very entertained by those short films.

It turned out that using the stick to activate movies and buttons didn’t work for children; the pressure they applied wasn’t strong enough to get things going. My son tired quickly of it and wanted to use his fingers. We explained to him that due to Corona, he had to use the stick. How sad that nowadays, this is what it’s like for children. But of course, we all want to stay healthy! By the way, some of the exhibits had signs that said, “do not touch.” If a kid touched them (and it happened a couple of times), there was a deep voice emanating from the dinosaur saying reproachfully, “Please don’t touch!” My son didn’t even do it, but I still shrunk when I heard that mysterious voice the first time 😉

We admired the big eggs of some dinosaurs; there were oval ones and perfectly round ones. There was even a whole nest with chicks and a watchful mommy!

There was a scary-looking feathery dinosaur, too:

And all in the back of this big exhibition hall was a humongous whale. It was a real skeleton, not a replica, donated by fishermen who had found it washed up to the shore. It must have taken a long time to clean all these bones by bacteria. Look at those teeth!

Running into one hall, my son exclaimed: “Saaaaand!!!” Another mom started laughing. Her kid and a bunch of others joined Lyons Cub digging in fine, white sand that changed its color depending on its height (the top was red, the lower regions green, and the lowest level (water) blue). The kids didn’t care, of course; they just wanted to play 😉

Another highlight was the woolly mammoth. My son’s favorite song at the moment is the “Woolly Mammoth Rap,” and we’re always stomping and dancing through the living-room playing mammoth. So now, he got to experience the real thing. A replica, of course, but nonetheless towering huge and enormous. There were a couple of stone age people near it, too, wearing furs.

Hope you liked our little tour through dinosaur land! And if you’re ever traveling to Germany, remember that fantastic museum in Münster!

2 thoughts on “… Visit the Dinos in the Naturkundemuseum Munster?”