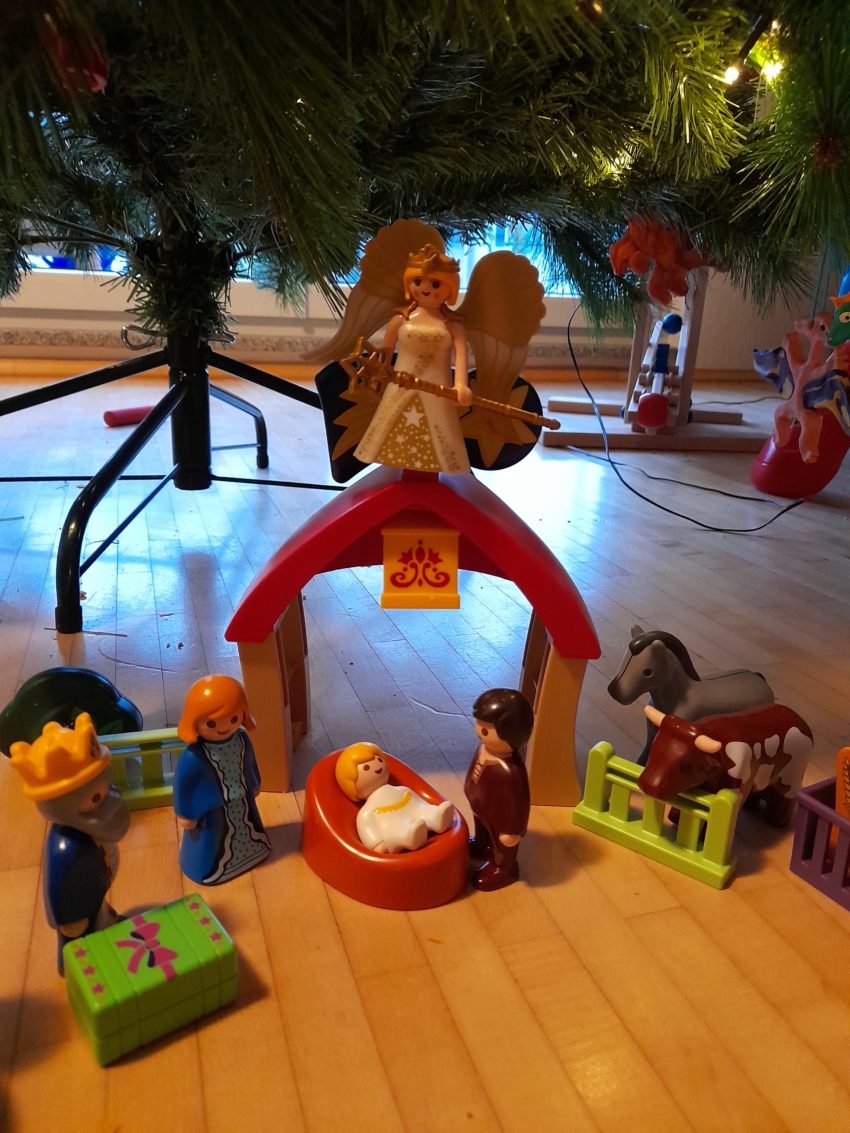 Lyons Cub’s first Christmas manger, when he was a year old, was from the Little People nativity scene. It was really cute and sturdy, with a light-up star and a Christmas song that played when he put the angel on top of the stable’s roof. Last year, when he was almost three, he received the Playmobil Advent calendar Christmas manger. I liked it because every day had a little meaningful Playmobil surprise for him with which I could explain the story of Christ’s birth to him (a few items, such as a bunny, two fences, a bush, and some animal food and food trays didn’t really belong to a standard nativity scene, but were a nice addition). Sadly, there weren’t any shepherds included with the single sheep; however, the three wise men were there with their gifts and a camel.

The angel did not belong to the set; I bought it as a separate figurine from eBay. The angel came in a double pack with a Santa Claus, and I had to hide the latter this year, because my son made Santa march into the stable to visit baby Jesus saying, “ho ho ho!” This is not how the story goes 😉 , so Santa had to vanish (he’s sitting high up on our Christmas tree, watching from above).

The figurines are painted nicely, even Mary’s dress is detailed. Playmobil figurines have evolved so much since I had them in the 1980s! Back then, they just had eyes and mouth, and nowadays, they have expressions, beards, sunglasses, black eyes, pink cheeks, etc. etc. In the 80s, I remember uni-colored clothes with a few clip-ons, and today, there are even swim suits and very detailed, multi-layered clothes. Did you know that it was a German who invented Playmobil? Hans Beck, dubbed the “Father of Playmobil,” invented them in the early 1970s according to children’s imagination (two eyes and a smiling mouth with no nose, and not too rigid). The company that produced them originally made casket ornaments!! Here’s a bit about the history of Playmobil.

Since all figurines in our nativity set besides Joseph wear dresses, they can’t move their legs, and Jesus is made out of a single piece and always stays in a half-seated position. They are cute and well made for little hands. Older children might be bored by their immobility. The adults can stand, bend, and sit, but none of them can move their arms or grab anything. Therefore, I’d personally recommend them for 2- to 3-year-olds (big enough not to put the parts in their mouths, but not yet into all the movements and refinement of Playmobil for older kids; the box says it’s suitable for 1.5-4 years, but small parts could be swallowed).